A Key Industry, Arizona Agriculture Hears from Those Predicting Growth

By Julie Murphree, Arizona Farm Bureau: Remember the now infamous quote, “You didn't build that,” from an election campaign speech delivered by President Barack Obama in 2012 in Roanoke, Virginia. The phrase was publicized by his political and generated much debate about America’s core industries.

But when you interview folks like Jim Uhl, and CEO of Agate and Rick Schmidt, Director of Business Development for the company, you conclude that we did build America, the “we” being Americans in construction, agriculture and core industries that, yes, built this great country. 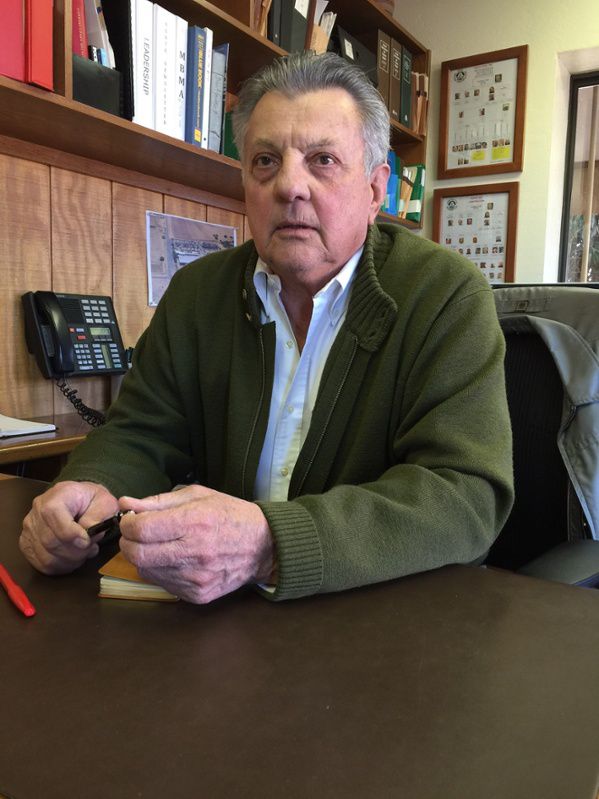 Agate President and CEO Jim Uhl teamed up with Temple Grandin in the 1970s to carry out special building projects for livestock feed yards.

We are now at a point in the United States that we may actually be legitimately coming out of the Great Recession. Much of this growth opportunity comes down to who is building what across the country. So, for us who better to go to than an Arizona-based construction firm that’s been in business for more than 40 years and experienced the ebbs and flows of several business cycles?

With a vision of “Construction Driven by Steel,” Agate does design; build projects and manufacture pre-engineered metal buildings. They fabricate steel and have concrete and steel erection crews as well as being a full-scale general contractor. Their projects can range in size from a $200,000 projects to $50 million projects. And of those varying they serve the mining, power, federal and agriculture industries.

What makes this visit worthy of Arizona Agriculture’s publication is the company’s genesis.

With roots in ag-related construction projects, the company started under the name Agro Construction & Supply Company. The feedlot industry was in a growth spurt in the 1970s. They needed a lot of things built and they need them built fast. Jim Uhl and his team were there to make that happen.

Their first customers were Arlington Feedyards in Arlington, Arizona where the company built feed bunks and a structural concrete retaining wall. At about the same time, the U.S. Geological Survey had a concrete water project for them. “The work was similar,” Uhl states. “Both had specialized concrete work that was required.”

The big story in the history of this company is the relationship Jim Uhl has with Temple Grandin, who ultimately became Jim’s friend and Livestock Facility Designer when the company was Agro Construction & Supply Company. Having teamed up early on with her, for 10 years they worked together on a variety of projects.

So, it’s very appropriate to learn what we can expect for growth in this state and what this means for business and certainly agriculture. Arizona Agriculture interviewed both Jim and Rick.

Agate Team: It’s positive. The Kiplinger Letter agrees that our national economic illness is finally coming to a close and that construction can expect to benefit and we can climb out. We do have to go on the climb back.

In some of our business we work nationwide. Some areas are stronger than Phoenix, or Arizona. But Phoenix, and statewide, it’s getting stronger too; but not happening fast.

I’m optimistic and I think copper, for example, will come back. They’re expecting a 25% increase in national housing starts across the United States. That will drive copper. Which is good for us since mining is a big portion of Agate’s business.

Arizona Agriculture: What’s the story behind the rash of building projects for the energy space, specifically new natural gas plants?

Agate Team: (Schmidt) The United States as a whole is behind the eight ball in power generation. Nearly 100 power plant construction projects were after the first election of Barack Obama six years ago and a lot of those projects never materialized. In the meantime, our current power plants that have been in existence were never intended to go that long. They either have to be updated or replaced.

As those old power plants fade out or have to be replaced, they must be replaced with something else. With the “war on ” they’re trying to replace all coal-fired plants. So they’re going to natural gas plants and renewable energy. Renewable energy can’t begin to produce enough power for this country and it’s very expensive, ultimately driving the cost way up for electrical usage.

As a result, we’re involved in the building of a lot of gas-fired power plants. We have projects all over the country from Alaska to Massachusetts.

There is such a need for more power, we can’t keep up with it. Once a power plant goes into design, it’s going to be five to six years before it’s online. If it’s a nuclear power plant it’s 10-year project.

Right now that I know of, there are four nuclear plants being built in the United States. We build the buildings that support the plant; such as the maintenance, administrative and storage buildings. Those are the first to be built since Palo Verde, which has been running at 90% power since the day it was commissioned in 1988. The reactor in Georgia, for example, is coming online in 2017.

Not too long ago I met Ted Turner, the big proponent of renewable energy. He said that there is no way this country can go forward without nuclear power, which he supports.

Nuclear technology is there and has been for some time. Realize the United State Navy has 6,000 or 7,000 men on an aircraft carrier or submarine that’s underwater for 12 months at a time powered by nuclear energy. They’ve never had an accident. This is the same technology that goes into a nuclear power plant today.

But in all of this, we need coal in the mix too. The United States to coal is what Saudi Arabia is to oil. Half the energy generated in this country today is generated by coal. So coal is a very integral part of our energy picture. Coal is also the reason your electric rates are where they are today. If you take coal out of the equation, you can quadruple your electric rate at the meter at your house. That will happen if coal is eliminated as a source of energy.

We participated in the building of a 280-megawatt condensed solar-thermal power plant. It cost $2.4 billion dollars guaranteed by our Department of Energy. We also just participated in the building of a natural-gas power plant in Palm Springs, California for 660-megawatts for a cost of $990 million. You can do that math all day long and green energy will never work out without being subsidized. So, it’s a big problem.

As you forcibly eliminate a resource, like coal, that’s available you eliminate an entire entire cities, communities and a workforce of unbelievable dimension.

I’m hopeful because the technology for clean coal-fired power plants exists. We just participated in the building of one in Illinois.

Large EPC [Engineering, and Construction] contractors, like the Bechtel’s, subcontract with us. Large firms like them have the entire block of the power sector and we come in and build the ancillary buildings that support energy facilities like I’m describing. We’re the only steel fabricator in the United States that will design, engineer and build out these buildings turnkey. So when we build an administration building for any large project we’re building right down to the television screens, showers and clean rooms and more.

We’ve done over 40 individual power plant jobs from Hawaii to Alaska to the east coast – all over the United States.

Arizona Agriculture: What do you see happening in the agriculture space in construction; any take on what’s occurring in Arizona?

Folks in the agriculture industry will carry out their own building projects themselves if they can do it. If it requires unique engineering, is large enough, a complex build and needed right away they’ll contract with a company like ours. If it’s big enough and there’s a deadline, we’re there.

Uhl: In Arizona, growth in agriculture will be directly proportionate to the amount of reasonably priced water that we can get. There’s no end to the growth if we can get the water. If we can’t get the water it will end.

Schmidt: Farmers are adopting the latest technologies, they’re dialed into the latest advances and opportunities. You drive around today and you’ll see some of the most sophisticated approaches to how they plant, where they plant and when they plant. You can see it obviously evident with produce farms; extremely sophisticated and dedicated-type farming. Where farmers really make their money is applying practices that improve yields or production output, reduce costs and more. When contracted, if we can provide a service that helps them continue to make that produce grow and harvest it and put it in the cold-storage buildings, processing plants then we can contribute.

Arizona Agriculture: Are we managing growth appropriately in Arizona and what would you like to see in terms of support for industries like construction and agriculture?

Agate Team: Schmidt: Along with a group of Arizona business professionals, I recently met with our new governor, Doug Ducey. His philosophy is that we have to get business to move to Arizona. He asked business leaders to stand shoulder-to-shoulder with him to draw businesses to come here and build a business climate that generates quality growth for this state.

No one is suggesting Arizona give away the farm to get business here. But, the Governor is calling upon business leaders, the legislature and others to create a friendly climate to make Arizona attractive to others.

Arizona can’t afford to stagnate. Arizona has a lot to offer. The key to this growth is people. The new governor and his team seen very supportive of business growth.

Uhl: Regarding agriculture and its opportunities, we all have to eat to live. It’s important that those in leadership whether in government, business and regulatory bodies must be friendly to agriculture and support its efforts to improve production.

Arizona Agriculture: Agriculture and construction have parallels: Both industries make stuff, both rely on natural resources, both struggle under some of the same tough regulations at times, for air quality issues. How do the two industries work together for a better Arizona?

Agate Team: Schmidt: People need to remember one thing. Basically, there are only two places on planet earth where you really get anything. You either grow it or you mine it. We can try to get as green as we want but even then we still need concrete, steel, copper and other raw materials. How do people eat? Where does it all come from? Agriculture and mining!