About Water, Farm Bureau Agrees with the Sierra Club

After Governor Doug Ducey’s economic speech on Tuesday, Sandy Bahr, director of the Sierra Club’s Grand Canyon chapter, criticized the Governor for failing to address the question of the role of agriculture in the desert. Her now famous solution (or infamous, one views it): “We could stop growing crops like cotton and alfalfa that are super water-hungry and inefficient.” 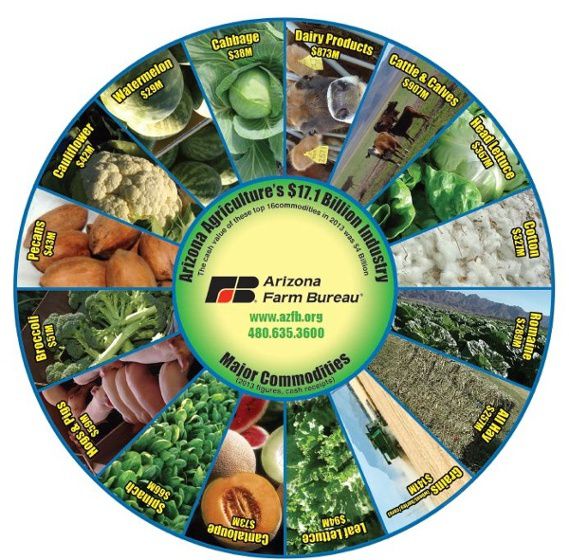 We wholeheartedly say “no” to water-hungry and inefficient crops too. But don’t include cotton and alfalfa that when combined provided $584 million to our state in 2013 in cash receipts, according to USDA’s Arizona Agricultural Statistics (latest available numbers). A year earlier, cotton and alfalfa’s cash receipt numbers were $688 million combined. The numbers change year to year because of value of the crop and can be influenced by the numbers of acres planted.

But what about water hungry and inefficient? Where do I begin! Every living thing living in a desert will be hungry for water. To grow food requires water. As one of our veteran Arizona cotton farmers Ron Rayner, said, “Any growing plant needs water to survive. In Arizona, we do have a growing season and it’s also true we have a very high consumptive use compared to a lot of other areas partly due to our low background humidity level and higher temperatures. The combination of those two creates a higher evapotranspiration rate.”

Rayner has grown a variety of crops in Arizona and he can tell you they all love water, low or high-use plants. Rayner is one of our valley farmers to pioneer low-till methods of farming for cotton.

Even your swimming pool sitting out in your backyard in Arizona uses six feet of water a year because that’s how much evaporates off of a standing body of water. The same equivalency is found in a green field transpiring water out through its leaves in our state. So, no question, our crops use water.

In regards to efficient, let me simply say that over the years improved seed varieties and irrigation practices have increased yields of both these crops and dramatically reduced the typical amount of water that was originally required to grow cotton and alfalfa. You may have read my quote in regards to this point in the paper recently but I, of did not get to tell the entire story (unlike Captain Kirk's "Final Frontier," time and space are not the limitless of the media).

And, you don’t have permission to tell me these are not food crops. They are too. One produces one of the healthiest food oils around that love because of its high flash point: cottonseed oil. Our Arizona alfalfa is grown primarily for our livestock that we raise for meat and dairy products. As food crops, they may be one link down in the food supply chain but they are still highly critical the food system in our country in order to grow some of the highest and tastiest quality beef.

Arizona agriculture is so efficient at what it does that we’re producing food for a local, national and international population 12 months out of the year. Eggs, vegetables, milk, fruits, and wine come from our Arizona farmers, local growers in the context of their efforts to grow crops in Arizona soil. Crops like grain, and cottonseed are fed to locally produced beef and dairy animals as they produce the food we eat.

Discussions about farming in Arizona even center on whether a desert state should be in the agriculture business. Answer: Yes! “The West contains approximately 20% of the U.S. farmland but it produces 60% of the total value of the agriculture product we enjoy today,” Rayner explained to me recently. “Therein lies the very important message for food security and national security for our country. The cropping systems that depend on rainfall in other parts of the United States and the may experience more climate variation or weather extremes if predictions about climate change are correct. Those areas may be unreliable producers.”

He added, “In the irrigated west, especially in Arizona, we have very consistent production year after year after year. And, it’s very high production. For example, instead of 45 bushels of wheat like Kansas, we grow 140 bushels of wheat per acre. The area devoted to agriculture in Arizona is very small but it’s incredibly productive. We have a lot of specialty markets like the winter lettuce program in Yuma. It’s a very specialized niche market but it’s very timely when it occurs.”

While agriculture may use up to 70% of our state’s water, have you thought about where it would go if we didn’t? My bet is that instead of feeding and clothing us and providing for environmental needs, California’s big cities would appropriate even more water than they already do or it would flow down the river to the sea (our agreement with the Sierra Club may stop flowing right here).

And, what most people don’t know, Arizona agriculture has plans in place to slowly relinquish the water over time to as the state grows more and more people, instead of food crops. If you don't know by now, 90% of the United States’ leafy greens including lettuce, spinach and broccoli are all growing in Yuma, Arizona from November to March -- that shifts to California during the summer (Despite drought, these two states' agriculture is vital to our nation's food security). Do you want to take Yuma farmers’ water, and the fresh produce we eat, away?

I hope we always have agriculture in Arizona in some form or fashion because I love what Shane Burgess, the Dean of the University of Arizona’s College of Agriculture and Life Sciences says, “We are a nutrition state and if you were to eat only Arizona-grown food you would be eating a Mediterranean diet.”

As most wise business professionals – farmers and ranchers – will tell you, successful entrepreneurs work inefficiencies out of the system. Annually a $500 or $600 million economic to our state we’ll keep our amazingly-efficient cotton and alfalfa crops, especially if they continue to be economically viable for our growers.

Writer’s note: In the spirit of full disclosure, my family grew cotton, and alfalfa in Arizona until 2005.