By Julie Murphree, Arizona Farm Bureau Communication Director: Arizona families and should see ample supplies of their favorite meats in 2017. Brisk demand will keep prices from falling too much further though producers of cattle and hogs have seen supply drive prices.

Those were major points made by Dr. Karl Skold, head of agricultural economics at JBS, at a workshop at the American Farm Bureau Federation’s 2017 Annual Convention & IDEAg Trade Show in Phoenix earlier this month. Skold said a historically unusual situation of expanding herds, growing and significant demand is driving an overall positive outlook for producers of beef and pork.

In Arizona, Arizona Farm Bureau’s fourth quarter food showed another decline in prices overall and especially in the meat section of the food basket. The informal survey showed the total cost of 16 basic grocery items was $47.07, down $1.65 or about 3 percent less than the third quarter of 2016. 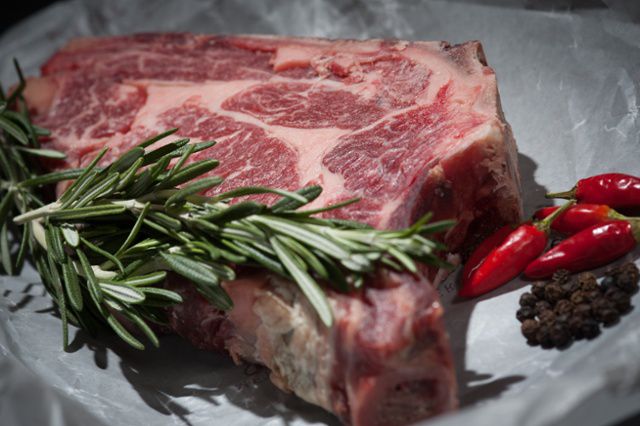 Livestock economists are seeing a big jump in eating meat including a shift to steaks because prices are so good for the consumer at the retail meat counter.

“Not surprisingly, the majority of our food proteins are down in price,” says Julie Murphree with Arizona Farm Bureau. “If you look at just the beef market, in two short years cattle markets have flipped from record highs to depressing lows. While it’s hurting the bottom line of our ranchers throughout the country, you and I should find good beef prices at the meat counter.”

“Start with lower feed costs,” Skold said, “And the economy continues to improve. We are nearing full employment and wages are picking up.” Skold said these trends are showing up in how consumers are making meat choices.

“We are seeing a big jump in eating meat but we are also seeing a shift to steaks,” Skold said. “We haven’t seen this big a jump in demand in a long time.”

This is encouraging news for cattle producers who have seen steep declines in cattle prices from record-highs only a year ago.

The situation with pork is similar, Skold said, and pork has been profitable until a fourth quarter drop last year. Per pork consumption has been stuck in the neighborhood of 50 pounds per person for some time. Pork is more dependent on the export market.

Skold also said that per capita consumption all meats, including chicken, is going up, tracking lower prices, but beef is gaining favor again with the ample supplies. The economist said that surveying retailers revealed that they had not priced steak as low in the last quarter of 2016 in six years.

“You go to the meat case and you see $5.99 steaks, you’re going to buy them,” he said. “You see $9.99, we’re going to feed the Johnson’s coming over chicken.” But Skold the prices are spurring significant increases in demand.

Skold said exports would be a huge factor in continuing health for the livestock sector. There are what he called “headwinds,” starting with a strong U.S. dollar against most other currencies.

Other nations cannot buy as much U.S. meat with their own currencies. He said that many of the gains in U.S per capita consumption have already been realized. The industry may have to seek additional gains in the export market. “You have the population increasing at six-tenths or eight-tenths per year and you get supply increasing 4, 5 or 6 percent you’re going to have to export it.”

Skold says Arizona families should see many opportunities to stock up on beef and pork as huge supplies will encourage demand. “Consumers have really returned and are eating more meat,” he said.