By UA Office of Global Initiatives with contributions by Julie Murphree, Arizona Farm Bureau: Recently, nearly 60 representatives from 19 Mexican universities made a visit to the Tucson Village Farm, located the University of Arizona's Campus Agricultural Center along Campbell Avenue in Tucson. The group is participating in a UA-hosted training for a project to establish a new extension network in Mexico. 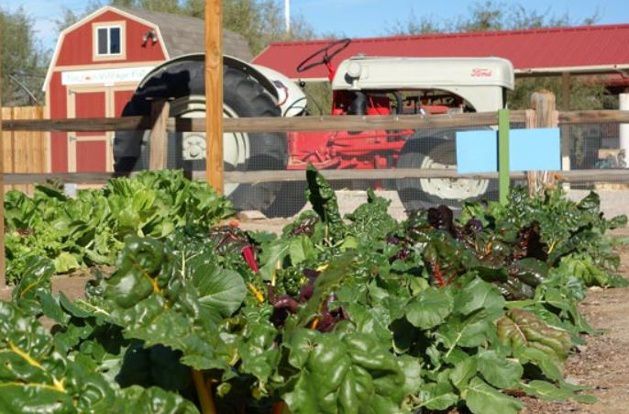 The UA is leading the innovative initiative in partnership with New Mexico State University. Called the Red De Extensión e Innovación Nacional Universitaria, or Project REINU, the project will serve Mexico as a national university-based network of scientists and educators to provide resources and educational services across the country. The network will serve as a link between research-based information and communities, as well as youth-based programs similar to Arizona's 4-H Youth Development program.

" is a collaborative initiative of Mexico's department of agriculture, SAGARPA, to develop essentially an extension service — but a university-based extension service," said Mike Proctor, UA vice president for global initiatives.

Paul Gutierrez, an extension specialist for New Mexico State University, said partnering with the UA on project was an obvious choice. Both universities are land-grant institutions, and their border locations mean they are well-prepared to serve Mexico and form strong partnerships with Mexican institutions.

"The partnership with the University of Arizona was very easy," Gutierrez said. "We're all part of the same cultural fabric."

The goal of 4-H programs is to prepare young people to make a positive impact in their communities and the world. The program has more than 6 million members nationwide and offers clubs, and other youth enrichment programs.

Kirk Astroth is director of the Arizona 4-H Youth Development program, operated within the UA College of Agriculture and Life Sciences' Cooperative Extension.

"In countries like Mexico where lots of challenges, young people want to be involved," Astroth said. "They want to be part of the solution. They want to design the future. They don't want to be spectators in democracy."

During the Tucson Village Farm training, which was just one portion of the visitors' weeklong agenda, attendees were able to tour the farm and learn about various aspects of its operations, such as funding and community program development.

There were also more than 100 first-, second- and third-graders from Coronado and Khalsa Montessori schools visiting the farm during the training, allowing the Mexican representatives to see Tucson Village Farm and Cooperative Extension agents in action.

These kind of collaborative partnerships with Mexico are an encouraging endeavor that many of Arizona’s farmers and ranchers are cheering on. In a recent interview with one of Arizona Farm Bureau’s long-time members, Maricopa County farmer and rancher John Augustine stressed the importance of Arizona and Mexico partnering on of efforts.

“We have to get our relationship with Mexico squared away,” says Augustine who has a wholesale plant nursery, and farm in the Midwest. “Canada and Mexico have huge natural resources. Mexico also has the tropical agriculture. We need to collaborate more in advancing our economies."

Augustine went on to discuss the analogy that a rising tide lifts all boats. Everybody wins when we mutually seek to improve partnering economies. He’s hopeful that efforts such as the UA can further the cause.

Augustine, the and others highlight the already intertwined relationships with the two countries, including previous work in other countries.

Astroth has former experience building 4-H programs in other countries. He has coordinated programs in Latvia and Lithuania and most recently returned from Nepal, where he also helped formalize a 4-H program. The best practices he has learned from those experiences will help direct Project .

He said 4-H programs have tremendous benefits for nations worldwide because they help to develop a country's youth and its future.

"4-H helps those young people develop the leadership skills and practical life skills so that they can have input and influence on the future, and course of their country," he said.