By Julie Murphree, Arizona Farm Bureau Communication Director: Arizona Agriculture farmers are currently harvesting cotton, melons, and lemons.  And, if you hang out at an Arizona farmers’ market on any given weekend right now, you’ll see a variety of specialty crops including pumpkins harvested and ready for you to try.

USDA ERS – Farm Income and Wealth Statistics: Cash receipts by commodity link highlights some other crops too. There are various commodities going as far back as 2010. Just scroll down and click to Arizona and it will give you the cash receipts for all commodities reported in Arizona.

You’ll note in the charts below a decline in lemons. So, I asked Kurt Nolte, agriculture agent, the School of Plant Sciences, Yuma County Extension Director for the Yuma Agricultural Center, why. The cost of production in Arizona is higher than in other parts of the citrus producing (i.e., South America), Nolte explained. “It’s simple competition and economics. However, Arizona citrus producers have benefited during the last 3 years from the catastrophic Argentinian freeze that occurred in 2013 with high lemon prices, ample and high quality.  Once the replanted trees in Argentina begin producing, we’ll likely dip back into where we were price-wise, before the South American freeze.”

Below are three charts showing Arizona agriculture lemon statistics. You'll note in the first chart that we're less than half the acres we used to be in lemons in Arizona. Estimates began ~1960 for production and acreage estimates began in 1978.  The additional chart that shows 1975 – 1988 were the big years of the Arizona lemon industry.  The 2006 – 2015 chart is just a different format and years than the 1960 – 2015 chart. 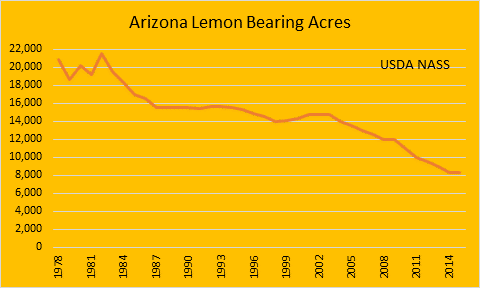 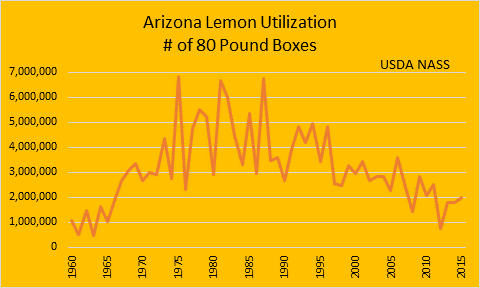 In Arizona, we're planting and harvesting year around. So while the fall harvest is representing just a few of our crops, remember what will be harvesting in the middle of the winter in Yuma, Arizona: Every leafy green you can imagine. 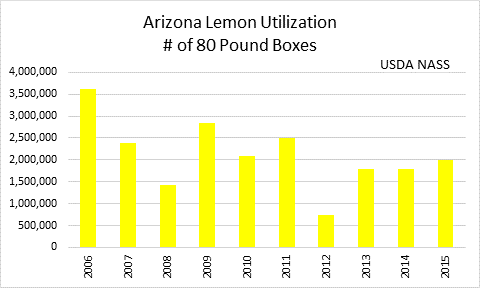 Indeed, a $17 billion dollar industry, and it varies, about half livestock and half crops; and farmers and ranchers account for 5% of the employment in this state. 20,000 farm units and only 1% producing 75% of all agriculture sales.