By Julie Murphree, Arizona Farm Bureau: Last week, the U.S. House of Representatives passed H.R. 1105, legislation that repeals the estate tax. This was a significant vote because the House has not voted on the repeal of estate taxes in 10 years. Removing the “death tax” as its better known would help family farms and small businesses invest in their future and pass their businesses on to the next generation. 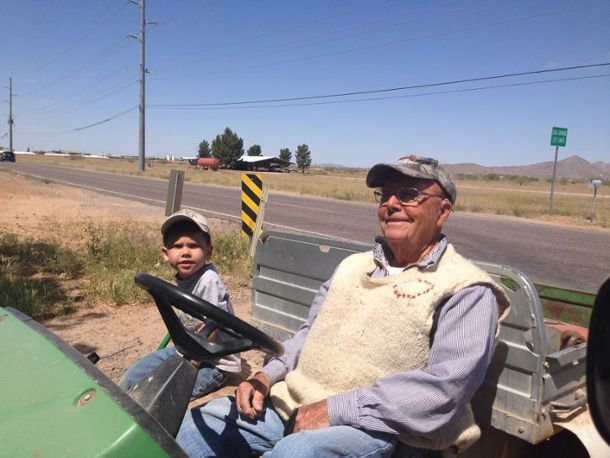 Jerry Kennedy with grandchild, Paxton, hopes that future generations of Kennedys are able to farm if they want to do so. The Estate Tax puts that option in .

Too often fail to realize that farm and ranch assets are tied up in their land and equipment, not bank accounts or other liquid assets. And although farmers have benefited from estate tax exemptions up to $5 million indexed for inflation, provided for portability between spouses and continued stepped up basis, they must continue to spend thousands of dollars on life insurance premiums and estate planning instead of reinvesting in their farms and ranches. As Arizona Farm Bureau Government Relations Manager Ana Kennedy noted, “My father will be 88 years old this year, although he is in good health, I know the time of dealing with estate taxes is not far off unless something changes.”

Voting in favor of estate tax repeal Rep. Trent Franks, Rep. Martha McSally, Rep. Matt Salmon, Rep. David Schweikert. Although the record shows Rep. Paul Gosar as a no vote, he was signed on as a co-sponsor the bill. Only seven Democrats voted in support of H.R. 1105 including Rep. Kyrsten Sinema, who stated this bill relieves Arizona families from the burden of estate tax planning, creating certainty for their futures, and helps their businesses grow and succeed.