By Julie Murphree, Arizona Farm Bureau: With a long-standing national impact on the livestock industry, Temple Grandin got her start in Arizona.

Editor's note: Members of Arizona Farm Bureau will get to read the entire conversation in the March 2015 issue of Arizona Agriculture. In the meantime, we give you a of the conversation I recently had with Temple Grandin.

Dr. Temple Grandin has dedicated her life to improving animal welfare and handling. One of the most successful people in the world with autism, Grandin is the leading authority on farm animal behavior. Her unique ability to visualize from the animal’s perspective led her to design livestock processing systems which are more humane and efficient. Her systems for reducing animal stress in processing plants are being used throughout the country—and around the world. Grandin also developed an objective scoring system for assessing and handling cattle and pigs at meat plants. A number of major corporations now use this scorecard to help improve animal welfare. 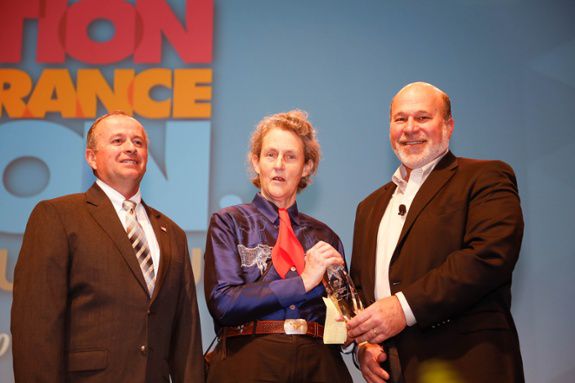 Grandin, a professor of animal science at Colorado State University, also travels the country giving lectures and uses her status to bring awareness to autism. She is a prolific writer, with two books on the New York Times best-seller list, and has received scores of accolades for her work.

And, she got her start in the livestock industry right here in Arizona.

In January, Grandin received American Farm Bureau’s Distinguished Service Award during its 96th Annual Meeting in San Diego. “There’s no question that Dr. Grandin’s work has transformed the livestock industry,” American Farm Bureau President Bob Stallman said. “Her groundbreaking systems have become popular across the country for their capacity to reduce animal fear and stress while making handling and transport easier. It would have been a big loss for animal agriculture if Dr. Grandin had focused her brilliant mind on something else.”

Grandin calls her time in Arizona her “cattle-formative years.” She also some of the most fun times she had were in Arizona when she was working with Jim Uhl figuring out how to make things and do things in the cattle industry. “I miss some of what we were able to do for the industry at that time,” Grandin added.

Arizona Agriculture: Tell me about working in the livestock industry in the 1970s in Arizona.

Grandin: There were some really good people. Ted Gilbert at the Red River Feedyard was wonderful. He was one of the I worked with on the dip vat project. There was Benedict Feedyard … They were wonderful. They recognized my abilities. There some good places.

Arizona Agriculture: What did you learn most during that time in the industry, especially here in Arizona?

Grandin: I learned how to design cattle handling facilities in Arizona. I also learned that a lot of things take a lot of perseverance.

Arizona Agriculture: You often describe how you see things; that you’re a visual thinker. As a visual thinker, explain how others could learn to think in pictures to grasp difficult concepts better? How can this help our industry? Can this approach to learning and understanding help others that are more linear?

Grandin: When I was first working in Arizona helping develop different [cattle handling] systems, I didn’t know that most people were not visual thinkers. I thought everybody was a visual thinker. I didn’t know my thinking was different. So it seemed obvious to me to get down into the chutes to see what cattle were seeing. Other people thought that was really weird. I learned that if you got rid of the hose that was laying on the ground, or you moved the truck that was parked next to the facilities, the cattle would move more easily.

I wanted to experience what the cattle experienced. I even went into a dip vat, which was not one of the smartest things I did.

I’d always ask myself, “Well how are the cattle experiencing this?” So I’d get into the chutes and things. That way I could see what cattle were seeing.

I went around and looked at a whole bunch of work facilities and feed yards.

When I first discovered that my thinking was really different was when I asked people about something I thought they knew. Their descriptions were really vague.

I associate with things I’ve seen and experienced.

Special note: To read the entire conversation, Arizona Farm Bureau agriculture members watch for it in the March 2015 issue of Arizona Agriculture. Not a member? the button below to sign up for an membership.