Arizona Agriculture, We're Victims of our Own Success

By Joe Sigg, Arizona Farm Bureau Government Relations Director: We were victims of our own success: agriculture so embraced technology and became so productive we did not need as many people. We produced more with less on less. We produced for diversity and full grocery shelves. We produced for export markets. Food became like air and water – it was always there, so why would anyone give it a second thought? 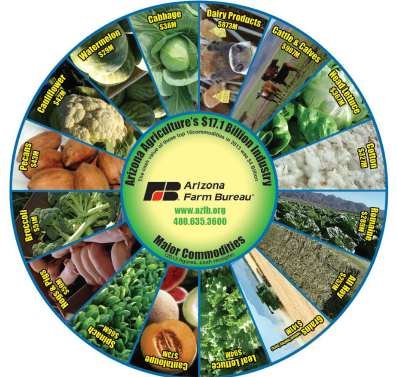 We in agriculture sat back too long, doing what we do while others had the time and resources to move attitudes around like re-arranging cloud formations, and sometimes these clouds rain on us. Woe is not me. The food producers now must spend part of their resources on the “re-connect.”

We were part of the great interdependency of specialization. We did not feed ourselves because someone else would. It’s a great thing because it is such a freeing of labor and while creating capital and growth.

I recently worked with a contractor on remodeling a bathroom who bid the job and was right there on schedule to collect the payments as they became due. There was a job supervisor who had overall responsibility, someone to do the demolition, yet another to do the carpentry, one to do the plumbing, one to do the cabinetry and finally one to do the tile. it was two on the because the first did a poor job and I made the supervisor bring in someone else for the “re-do.”

Because each one had the specialized expertise, except for the tile guy, the contractor could maintain multiple job sites at once – he could move faster and “stack” his income potential. That’s part of what we did to food production – heck we even have specialization within that, and to a very high degree!

While we became very good at our job, we became fewer in number, and we forgot a few things or took them for granted. About half of the food we produce has to be killed. More and more that does not rest easy with a population who has time to sit around and think about such things. We use science and artificial inputs (sometimes invasive, but we forgot to tell the public when we became less invasive) to produce foods, and for many in our population, food is just kind-of-sort-of-supposed to be natural.

I heard a commercial this morning – they want money to preserve wildlife and habitat. Yes, that is something that might appeal to people, who have the luxury to think about preservation of the non-productive. Our second president said he studied war and history so his sons could study math and science, so his grandsons could study art and architecture. That’s all good – this freeing of time in a well-fed society for other pursuits, but the downside is it creates disconnects, and we see it in agriculture; which is a disconnect word in itself, once-removed. We are not agriculture – we are “food producers.”

And, yes, we sat back too long, doing what we do while others had the time and resources to move attitudes around like re-arranging cloud formations, and sometimes these clouds rain on us. Woe is not me. The food producers now must spend part of their resources on the “re-connect.” The environmental ethic is in one of those persistent cloud formations and we cannot simply shout at it and dismiss it.

We have to spend our time and resources informing and educating, and then we must continue building on that foundation. Sustainability in our industry has nothing to do with food production – it has everything to do with messaging.