Arizona Agriculture is Primary, Not Secondary

By Julie Murphree, Arizona Farm Bureau Communication and Organization Director: Last month, the University of Arizona hosted the 2017 Water Resources Research Center (WRRC) Conference, “Irrigated Agriculture in Arizona: A Fresh Perspective.” Vice President and Dean of the College of Agriculture and Life Sciences, Shane Burgess, opened the meeting reminding us that without agriculture you can’t have any other industry. 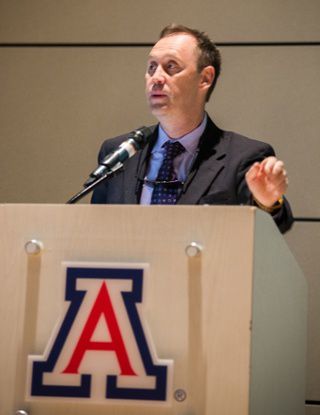 “This conference, which examines the connections between water and our $17.1 billion dollar Arizona agriculture industry, can also help to remind us that agriculture is a primary industry that must exist to allow all of our secondary industries to operate,” said Dean Burgess. “And for our state’s economy to continue to boom we must have irrigated agriculture.”

But it was when Burgess said, “Water converts the energy of the sun to life” that I knew we were in for a well-coordinated conference by WRRC Director Sharon Megdal and her committee.

His words inspire. For the young people in the audience last month I hope it sparked an interest in agriculture and the life sciences.

Burgess also went on to explain that Arizona’s farmers and ranchers are some of the most efficient in the nation when it comes to maximizing desert crops and managing water, highlighting the Yuma County example where irrigation water diverted to farms has decreased 15% since 1990.

Burgess mentioned others. Tom Buschatzke, director of the Arizona Department of Water Resources and one of the keynote speakers during the water conference, has called Yuma agribusiness, “A world class venture that is a model for efficiently using water to maximize agricultural production and economic value.”

Need more evidence that we’re doing a great job with our water management in agriculture? After Dean Burgess welcomed everyone and highlighted a few of the speakers, one was John Sullivan, former Deputy General Manager for Salt River Project. Here’s what Sullivan said about water recharge: “If you look at depth of groundwater for the East Valley alone [metro Phoenix area], you’ll discover underground basin improvements. In the 1940s, wells were a typical depth of 100 feet. In the 1950s that went to 200 feet. In the 1960s, up to 250. And, by the 1970s well depth was over 250 feet. 1980s Groundwater Act passes and groundwater levels begin to recover. levels in the East Valley are back to the 150-feet depth levels. Driven by conservation and water banking, improved efficiency is the byword for agriculture and stewardship.”