Arizona Agriculture is Proud of its Second-Place Finish 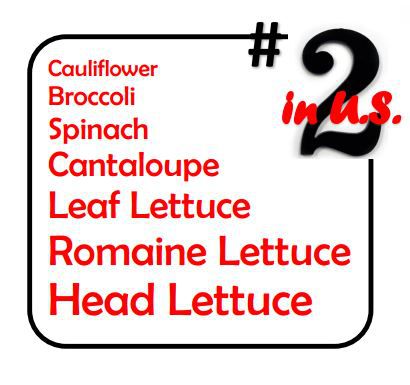 And no wonder, our agriculture experts from the “Golden State” explain that California’s moderate, Mediterranean climate, coupled with the state’s fertile soil and diverse land resources, allows year-round production of many agriculture commodities. Some of those with year-round crop seasons include lemons, artichokes, avocados, broccoli, cabbage, carrots, cauliflower, celery, lettuce, mushrooms, potatoes, and squash.

But guess what, Arizona has a year-round production system too and perhaps one of the reasons we come in only second to California with certain crops. In fact, most of the leafy green production like head lettuce, leaf lettuce, romaine lettuce, cauliflower, broccoli, and spinach production shifts from California to Yuma, Arizona in early fall and continues there until the end of March where it then swings back to California. That’s why the entire nation depends on California and Arizona for most of its vegetable production.

Arizona Agriculture is Second only to California in these crops.

So while we’re second in these crops, we’re a proud second. The following cash receipt value of these crops are from the United States Department of Agriculture (USDA) and are the latest figures available.

This winter, when you’re tossing that salad of yours with your favorite dressing remember that all the leafy greens are most likely coming from Yuma, Arizona.