By Julie Murphree, Arizona Farm Bureau Communication & Organization Director: According to the United States Department of Agriculture’s (USDA) National Agricultural Statistics Service (NASS), the average yield of honey from each Arizona bee colony was 46 pounds in 2016, down three pounds from the previous year. But, if you look at the chart, you’ll see dramatic ups and downs especially since 2010. 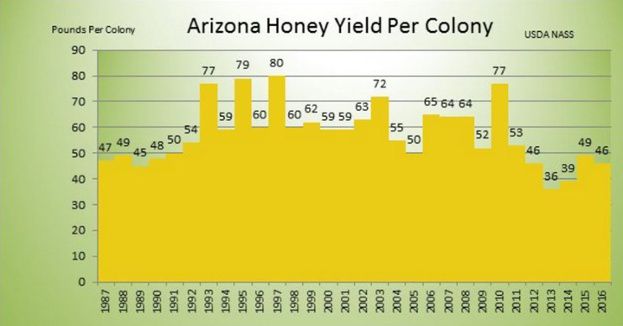 Despite the current cloud of colony collapse disorder, several factors contribute to the ebbs and flow of honey production including fewer foraging options for nectar, wet winter weather conditions, unhealthy hives and shifts in growth or contraction of businesses in the hive business.

According to the USDA, in 1970 Arizona produced steady amounts of citrus across 80,000 acres, but as of 2012, the states grows just over 17,000 acres of citrus, a favorite foraging options for nectar. With less citrus to pollinate, few options exist.

In the USDA’s monthly National Honey report, demand for honey remains good across Arizona. Temperatures were at above normal levels during the first three weeks of February, and at slightly below normal levels the last week of the month in Arizona. The range of temperatures for the month a high of 90 degrees Fahrenheit at Sahuarita to a low of 3 degrees Fahrenheit at Grand Canyon. During the month of February, 0, 23, 50 and 27 out of 50 reporting stations received precipitation during weekly reporting periods, respectively. For 2017, 24 out of 50 reporting stations are at above normal precipitation levels, while 26 are at below normal levels. Many Arizona bee colonies remained out of state during the first part of the month for the purposes of pollinating fruit and nut trees elsewhere, especially California. However, towards the end of the month, preparations were being made for some colonies to return to the state. Alfalfa and desert and plant bloom were the main sources nectar and pollen in the state.

— Honey bees are essential to the production of more than of the crops in the U.S., adding an estimated value of more than $15 billion each year.