By Joyce Lobeck, agriculture writer investigating the agriculture education issue on behalf of Arizona Agricultural Education / FFA Foundation and Arizona Farm Bureau: Arizona has been facing a shortage for several years of agriculture teachers that officials concerned about its lingering impact on the industry that helps feed the nation. 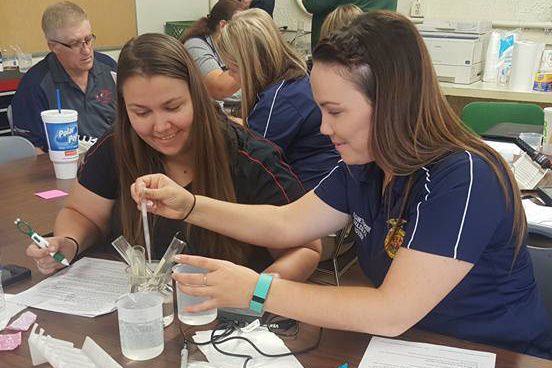 “Absolutely,” the state faces a shortage of qualified and certified agriculture teachers, maintains Dr. Robert Torres of the University of Arizona. And Arizona isn’t alone in the problem, one that has existed for several years around the nation, said Torres, Neely Family Endowed professor and department head who is the president-elect of the American Association for Agricultural Education.

The shortage of quality agriculture teachers impacts agricultural education. Schools may be unable to expand or add desired programs and in some cases are forced to close existing programs. This is particularly true for smaller, rural schools that find it more difficult to attract teachers.

Or a school may experience a turnover of teachers that results in a lack of stability in a program and adversely impacts the quality of instruction agriculture students receive.

“Every time we fail to get a qualified, highly motivated person, it’s a critical issue,” said Torres. “It has a long-term effect on the program. It’s a multiplier effect … if we don’t have quality teachers in the classroom, it affects agricultural education and the ability to attract students to the agriculture career field and preparing them to function through that career.”

Others share his assessment of the challenge facing agricultural education and its worrisome impact on the industry.

Equally adamant about the shortage is Jeremy Plumb, a former agriculture teacher and FFA advisor who now serves as superintendent of the Mountain Institute JTED in Yavapai County. “Absolutely, there is a shortage nationwide and there has been since I entered the profession 20 years ago.”

He estimates there’s a 15 to 20 percent shortage nationwide, with far more positions opening each year than new ag teachers to fill them.

This is a critical concern to the agriculture industry on several fronts, said Katie Aikins, director of education for the Arizona Farm Bureau.

With the average age of farmers 59, there’s a need to prepare the next generation’s work force for the production of the nation’s food and fiber, she said. “We need students coming out of school who are able to go right to work.”

There’s also a need to raise consumer knowledge of where food comes from and support for policies that benefit the farming industry, Aikins said.

“At the very basic level, we need people making policy and decisions who have some experience with agriculture.”

“The demand is encouraging … wonderful,” Thompson said. Programs are being expanded and 94 new ones have been added to meet a growing interest by students in the subject. However, she continued, “We just don’t have the supply (of teachers) to meet the demand.”

Nationwide, there is a shortage of between 200 and 400 agriculture teachers a year that impacts tens of thousands of students, she said. In Arizona, there was a shortage of about 20 positions last year that directly impacted 1,600 students.

That year, 23 ag teachers left the profession while there were only six graduates from the UA agricultural educator-training program - although that number is projected to increase in coming years. Meanwhile, the state added five new agricultural teaching positions.

This has been a trend for several years, she noted. The saving grace is that many of those vacant positions are filled by alternatively certified teachers, either those with an agriculture background who don’t have education degrees or by teachers from other content areas such as science who transition to the agriculture program. Over the years, these people often go on to become certified agriculture teachers.

Thompson attributed the shortage of qualified, certified agriculture teachers to a variety of factors.

Even as new positions are being added, hundreds of agriculture teachers leave the classroom each year due to retirement, moving into non-teaching education positions or leaving the education profession entirely for other opportunities.

While some 30 states are struggling with a shortage of agriculture teachers, Arizona has a higher loss rate even as it has a large interest by students in agriculture programs, Thompson said. “Schools want to add programs but they just can’t get teachers. And the state has about a 22 percent loss rate.”

Torres said the challenge of filling ag teaching positions is part of a wider problem facing education. “ have a high attrition rate. They tend to stay three to five years in the profession.”

Often salary is cited as one reason for their moving on to other jobs that pay better, he said.

“Arizona teachers make 75 cents for every $1 the average teachers around the nation make,” Aikins said, adding that Channel 12 in Phoenix in June reported that the state ranks near the bottom nationally for teacher salaries.

“Teachers don’t do it for the money but they do need to make a living,” she said.

There are other factors as well, Plumb noted.

Agriculture teachers who double as FFA advisors put in many extra hours helping care for their students’ animals and accompanying them to shows, fairs, competitions and conferences that take up their evenings and weekends without additional compensation.

Further, there’s been an erosion of funding support by school districts as they struggle with tightening budgets.

Another disturbing trend, Torres said, government mandates that hold teachers aligned to student performance and how they do on testing. “It’s so precarious. There are so many other factors impacting student performance … social, economic, home life. We’re making teachers responsible for all the students’ problems. It used to be that when a teacher signed up, it was to provide instruction. Now they’re expected to do so much more … more than just teach.”

Kevin Rogers, president of the Arizona Farm Bureau, summed up the farming organization’s concern about the shortage: "This is a huge problem that puts the future of our industry at risk. It has been sitting on the back burner far too long and I challenge the agriculture industry to join Farm Bureau in tackling this head on.”

He concluded: “The time is now to act on what is important to us, and our common ground has always been our youth – the students of agricultural education and the FFA.”