By Julie Murphree, Arizona Farm Bureau: You may have noticed the billboards along I-10, especially since at first glance they will make you grimace with disgust and despair. Then, if you’re in agriculture, you’ll get mad. Mad that the billboards are not really addressing the evils of human trafficking and just as upset that they’re associating such immoral activity with our agriculture. See the billboard example for yourself in this article and you’ll see what I mean. 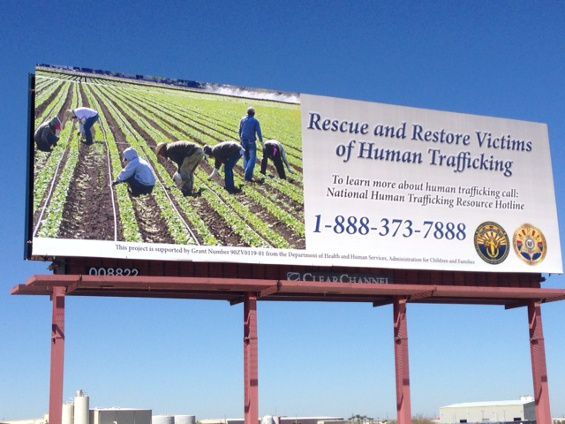 This billboard could be found along I-10 and leaves one with the impression that agriculture is the big culprit of human trafficking, which is not the case.

So, Arizona Farm Bureau took it upon itself to investigate the source(s) of the billboards and we came away with a few surprises. Ultimately, we wrote a letter to key parties behind the billboard. While we admire organizations trying to make a difference in the lives of innocent and exploited people, we also need to take honest, effective action to stop the evils of human trafficking. A billboard showcasing a false association doesn’t help.

In a letter to Cindy McCain, Arizona Senator John McCain’s wife and co-founder of the McCain Institute for International Leaders whose organization appears to be partly behind the billboards, Arizona Farm Bureau President Kevin Rogers said, “The Arizona Farm Bureau represents production agriculture and does not support human trafficking. In fact, we and the agricultural community have been seeking visa reform for both permanent and seasonal agricultural workers for nearly two decades. We have worked closely with Senator John McCain on this very issue.”

The letter goes on to share the agriculture community’s concern. “We are offended that your organizations chose to highlight an agricultural field to illustrate your message of “Rescue and Restore Victims of Human Trafficking” The thousands of travelers on I-10 that saw those and other billboards around the state were left with the impression that human trafficking is when they see agricultural field workers.

“The campaign was intended to draw public attention to human and sex trafficking during the build-up to the Super Bowl. I caught many of the radio spots and interviews by Mrs. McCain. They were well done and focused.

“The damage has been done to our industry. The vision of field workers as victims of human trafficking is planted in hundreds of thousands travelers’ minds. That was the goal of your billboard and particularly the goal of Polaris.

“Members of the agricultural community are disturbed when their industry is unfairly portrayed. I have taken calls from around the state from my members. My only recourse is to let you know of our disappointment in your characterization of our industry.”

The letter was also sent to Polaris, Clear Channel Outdoors and the Pinal County Attorney Lando Voyles. The valiant work of people like Cindy McCain and others fighting the child sex trade and human trafficking must continue. The agriculture community hopes that the real story effectively revealed by unmasking what is really going on.

Postscript to this story: Ana Kennedy, Arizona Farm Bureau Government Relations Manager, received a call from the Pinal County Attorney, Lando Voyles. Wrote Kennedy, “He said it was never their intention to paint agriculture in a bad light. The grant funding for the campaign is through Department of Health and Human Services and they played a role in the selection of the image. The county wanted to use another image tied to the real issues of human but was told they couldn't. Anyway, the billboard signs are coming down! Lando extends his apologies to the Arizona Farm Bureau and Kevin.”