Duvall noted the U.S. all-milk price fell to $14.50 per hundredweight in May, the lowest level since 2009. In addition, he told the USDA, dairy farm cash receipts from milk sales have fallen $16 billion since the record highs of 2014.

“The decline in dairy farm revenue has led many dairy farm families to exit the industry,” Duvall wrote. “In 2015 we lost 1,225 dairy farms – many of those small dairy farm operations where the average herd size is fewer than 200 milking cows.” 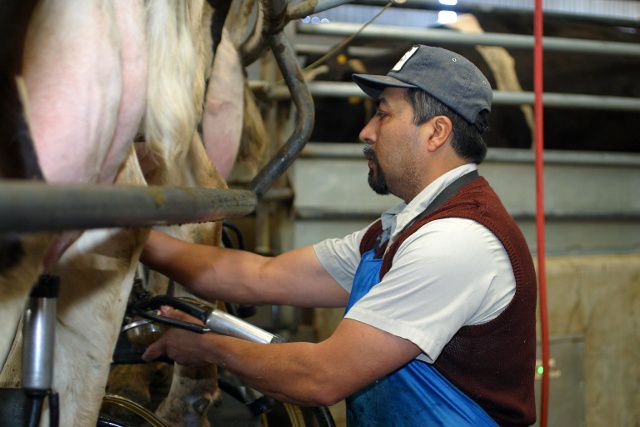 Last year, 1,225 American dairy farms went out of business – many of those dairy farm operations herd size  fewer than 200 milking cows. In Arizona, the average dairy cow herd is 1,500 to 2,000.

Arizona’s dairy farmers know all too well how to prepare for downturns in the market. Buckeye dairy farmers Sine and Bill Kerr of Kerr Family Dairy explain it’s a matter of always being ready for the trough in prices. “Thankfully (sort of), the dairy industry has always demonstrated volatility in its market,” said Bill Kerr.  “I say ‘thankfully’ because we know that good milk prices will be followed by bad milk prices and that helps us always be in the ‘preparing for the downturn’ mode.”

Kerr explains that you begin dealing with a coming storm before it hits. “We begin weathering bad economic conditions when the conditions are at their best. That's when we pay down debt, lines of credit, and stockpile feed. When difficult economic times hit, we try to control as many inputs as we can, but our priority is cattle health so we are very limited as to what we can cut.”

Hard times are felt in all areas. “Unfortunately, during hard times that does mean a job may not be filled, an implement purchased, or improvements made on the facility,” adds Kerr.  “We know that when milk prices are down, our fellow dairymen are in the same big boat we find ourselves in. At best, we will break even this year and at worst we will lose money and have to dip into our line of credit more than we hoped. It can take years to recoup lost equity. In times like this, we hope that cash flow outlasts the bad milk prices. Sometimes it comes way too close for comfort. Decades in the dairy business has taught us to take it all in stride.  We do our very best work each day, and at the end of each day, we live by faith that tomorrow we'll be blessed to get to do it again. We have learned to be thankful for the privilege of being dairy farmers, taking the good with the bad. When it's all said and done, there's nothing else we'd rather be doing.”

AFBF President Duvall said lower dairy exports, increased production in Europe, expansion of the U.S. dairy herd due to economic signals in 2014 and a record high domestic cheese inventory continued to weigh on domestic markets. USDA is projecting a 2016 average milk price of $15.70 per hundredweight, down 35 percent from 2014 and the second lowest level in the past decade.

U.S. dairy producers, meanwhile, have been slow to adopt USDA-sponsored tools to manage dairy market price risk, due to the program costs and benefits being less attractive to some production segments. In 2015, just 25,000 of the 45,000 U.S. dairy farms signed up for the new Margin Protection Program enacted in the 2014 farm bill. Only 23,000 enrolled this year – a majority of them at catastrophic coverage only.

Duvall said AFBF was “extremely appreciative” of USDA’s deadline extension to sign-up for MPP as well as the expansion of a farm's production when new family members join the business. He noted AFBF also believes the $11.2 million in MPP assistance announced last week will help, but more can be done.

Duvall asked USDA to buy additional dairy products to be used in USDA’s nutrition programs and for donations to food banks.

“Specifically, we believe cheese could be purchased in a quantity that would help the dairy industry and yet not negatively impact our exports of cheese products,” Duvall said. “If the Department spent $50 million, it could purchase 28 million pounds of cheese for domestic feeding programs. This would not only be beneficial to those in need of but also would help reduce the record high inventories and would provide a positive price impact for dairy producers.”