Diversification May Be Key in Today’s Low-Income Ag World

While farm income is down across the board, today’s farm economy is noticeably different than it was in the 1980s, according to Dr. Bob Young, chief economist at the American Farm Bureau Federation.

At a workshop at AFBF’s 2017 Annual Convention & IDEAg Trade Show this month, Dr. Young and members of the AFBF economics team gave an overview of the farm economy and what the agricultural economy may look like five to ten years from now.

“We have actually brought on board almost 200 million acres in agricultural production worldwide since 1990,” Young said. “That’s almost the size of U.S. agriculture.” 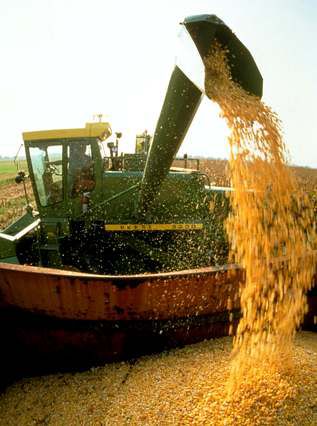 The demand side of the equation has also increased substantially, said and the tremendous increase in supply and demand has led to price volatility. In the 1980s, non-commercial lending was one-third to one-fourth of all farm lending, while today it is less than five percent. This means producers will have to have a business plan, and they may be more likely to be turned down by commercial lenders.

Dr. John Newton, AFBF’s director of market intelligence, said that supply has continued to outpace demand, putting pressure on prices. The biofuel boom is over, and livestock is flat, Newton said, so international trade is taking on increasing importance in the global economy. Agricultural exports were $133 billion in 2015, with more than 50 percent of U.S. agricultural trade coming from Mexico, Canada, and Japan.

“The key is to recognize the market we are now in, think about how we can make effective marketing decisions and see the marketing opportunities when they become available,” Newton said. “It’s a new paradigm. The golden age of agriculture income is over.”

Arizona Farm Bureau sought forecasts and predictions about Arizona agriculture from our own economist. “Two regular wild cards in the mix are drought and exchange ” said George Frisvold, Ph.D., professor and extension specialist for the University of Arizona, who did not attend the AFBF convention but serves as Arizona agriculture’s economist on a number of issues in this arena.  “There is good news and bad. So far, snowpack in the areas that feed Lakes Mead and Powell are above average.  This is a good sign for avoiding a Colorado River Shortage Declaration, which would take surface water deliveries away from Central Arizona agriculture.  A stronger dollar makes U.S. agricultural exports more expensive and less competitive on world markets.  The dollar has been appreciating in recent months.  If this continues, as many economists are predicting, this will dampen export demand for some Arizona crops.”

At The Farm Level

Katelyn McCullock, economist, said that at the farm level there are three basic “operational mantras” to cope with falling prices: maximizing revenues, minimizing costs or minimizing volatility. But she says that there are things all businesses can do without worrying about price.

“Every operation, regardless of what industry you are in, can look at genetics and technology,” said. “We are often focused on more production and higher yields, and that is important. But maybe in this lower net income we should be focusing on efficiency.  How can we get the same production with lower input costs?”

Veronica Nigh, economist, said there are things that all businesses can do in the next one to two years such as maximizing and preserving cash, reducing costs and diversifying income. There are several ways to conserve cash, Nigh said, including re-examining your tax strategy to avoid paying unnecessary taxes and refinancing farm debt before interest rates go up again.

Nigh said it can be a good strategy to consider additional sources of income to increase revenue. Uber’s slogan is “Get your side hustle on,” which is a good way to think about new ways to add income to farm operations.

“Diversification can be an important tool to bring in income,” Nigh said. “Farm to table is a good opportunity. People like to know where their food comes from. And what about things like stocking your fishing pond, turning it into a private lake, or starting a hunting and fishing operation? We have all this space, so why not offer motor home, boat and trailer storage?”

Echoing the importance of trade, Nigh added that there are numerous resources and trade organizations that can help you market your farm products to export markets.

Outlook for U.S. Crop Prices Continues to be Below Average

In the meantime, The U.S. grain price outlook and crop demand for 2017-2018 will likely show no major changes according to Dr. Pat Westhoff, director the of food and Agricultural Policy Research Institute at the University of Missouri.

Trends for 2017 look to stay similar to that of 2016, unless a major disruption in outside factors occurs, such as weather or foreign market changes, according to Westhoff. Prices will continue to be below average, and lower than 2016, based on trends, he said.

“Lots of pressure will be placed on labor markets where there hasn’t been in the last several years,” Westhoff said. This a result of poor labor markets and a slowing rate of population growth.

“Most of the immediate population growth will occur in the age range of people who are not of working age in the U.S., adding to the stress on the labor market,” Westhoff said.

Yields for global grains and oilseeds have increased by roughly 1 percent per year since 1980; this is the same rate as the global growth in population, Westhoff said. Similarly, the area harvested for wheat, rice, corn and soybeans around the world between 2002 and 2014 increased by 17 percent; world per capita consumption is at a 16 percent yearly increase.

Recently, biofuel growth has slowed and there are questions about the future of Chinese growth, as well. The grain and oilseed markets stand to continue current trends because of this, according to Westhoff.

“World production of the four major crops – corn, wheat, soybeans and rice – increased by nearly 50 percent since 2002,” said. “2016 will be the fourth straight year with above trend global yields for these crops.”

Former chief economist of the U.S. Senate Committee on Agriculture, Nutrition and Forestry and dairy farmer with his family in eastern Iowa, Westhoff also addressed the outlooks on global and U.S. markets for each of the major crop markets separately – corn, soybeans, wheat, and rice – predicting not much change will occur.

And issues specific to Arizona agriculture were not addressed during the Annual Meeting earlier this month, Arizona Farm Bureau sought Professor Frisvold’s take on today’s economic environment. “USDA price forecasts for important Arizona commodities are a mixed bag,” added U of Ag’s Frisvold. “Wheat prices continue to slide. Forecasted prices for 2017 are a dollar a bushel lower than last year and two dollars lower than two years ago. The stocks to use ratio for durum wheat is also projected to increase, signaling soft prices. Cotton prices, in contrast, look to be up for 2017 from the previous two years.  While cattle prices are forecast to fall this year, dairy prices are predicted to rise. Farm level vegetable prices are projected to decline 6% to 7% in 2017.”