By American Farm Bureau Federation with Contributions by Julie Murphree, Arizona Farm Bureau: An approach to agricultural labor reform that focuses solely on immigration enforcement would raise food prices over five years by an additional 5 to 6 percent and would cut the nation’s food and fiber production by as much as a staggering $60 billion. 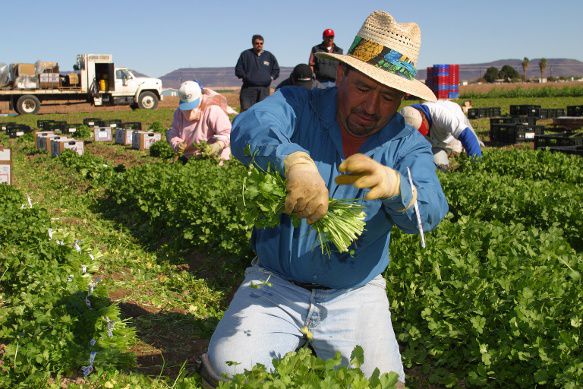 Those are among the results of a report, “Gauging the Farm Sector’s Sensitivity to Immigration Reform,” conducted by World Agricultural Economic and Environmental Services. The report was commissioned by the American Farm Bureau Federation (AFBF) and released in conjunction with the #ifarmimmigration grassroots campaign, a month-long campaign sponsored by AFBF and the Partnership for a New American Economy to promote the need for agricultural immigration reform.

By far, the best scenario for farm labor reform both for consumers and farmers is one that includes immigration enforcement, a redesigned guest worker program and the opportunity for skilled laborers currently working in agriculture to earn an adjustment of status. Under that scenario, there would be little to no effect on food prices, and the impact on farm income would be less than 1 percent.

“Arizona farmers have been asking for visa reform for over a decade,” explains Arizona Farm Bureau President Kevin Rogers. “We must have a way to grow and harvest our food; otherwise other countries will come along and do it for us. Enforcement without a worker program hurts Arizona’s agriculture industry.”

Today, U.S. agriculture depends heavily on workers who may have improper documentation with no viable means of verification. Regardless of the reform scenario studied, it is clear that a legal workforce comes at a price.

“Status quo is not a viable option for anyone involved in this issue, and as a nation, we expect better,” said American Farm Bureau Federation President Bob Stallman. “Farmers and ranchers recognize there are costs to ensuring they have a legal, stable workforce. And we are willing to step up to the plate.”

“With a reworked guest worker program, and by allowing skilled laborers to earn an adjustment of status, food prices would remain stable and there would only be marginal impacts on production,” Stallman said. “It’s clear that we need greater enforcement, but those two key reforms must be included in the process.

Arizona Farm Bureau conducts a quarterly of 16 food items on behalf of Arizona families. If the study’s suggested increase of 5 to 6 percent in food prices is realized, that increase would be especially high in the fruits and vegetables and other basic items. “To see that type of price increase factored into our cost of food then layer on inflationary food-price periods -- which come and go --- then such a scenario becomes a true hardship for some families,” suggests Julie Murphree, spokesperson for the Arizona Farm Bureau whose department spearheads the quarterly . “We shouldn’t have to see the consequences of no visa reform hit consumers in the pocketbook.”

“Agriculture must feed 9 billion people by 2050 with fewer resources available,” said Arizona Farm Bureau 1st Vice President Stefanie Smallhouse. “Our government should not make this more challenging than it has to be to meet this need by ignoring our labor problems. We’re trying to make our diets healthier for our children. With the increased food prices, will this cause families to opt out of eating more fruits and vegetables?”

“Most Americans believe that they have outgrown farm work, which is reflected in their unwillingness to take farm jobs, even temporarily,” said Stallman. “The bottom line of this study is that we either import our labor or we import our food.”