By Arizona Farm Bureau Communication Director Julie Murphree: Equal treatment of domestic and foreign growers, the need for extensive education, training and technical assistance and agricultural water provisions are among farmers’ top concerns as they implement the Food Safety Modernization Act’s (FSMA) produce rules, according to Bob Ebhart, senior policy and science advisor with the National Association of State Departments of Agriculture. Ebhart spoke to farmers and ranchers from across the country during the American Farm Bureau Federation’s 2017 Annual Convention earlier this year. 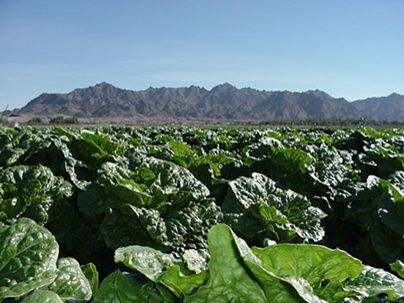 Signed into law in January 2011, FSMA focuses on the prevention of foodborne illness including risk-based “preventative controls,” and provides new enforcement authorities such as the ability to ensure the safety of imported foods and to regulate . The law directs the creation of an integrated food-safety system in partnership with state and local authorities.

As straightforward as Congress’ objectives may have been in crafting FSMA, the rules are exceptionally complex.

“There’s a whole lot of detail in these rules. It’s going to be very difficult to figure out where you fit and what’s expected of you,” cautioned Ebhart. “There is a logic associated with it.”

But while Ebhart highlights the exceptionally complex rules, here in Arizona and California – the leading states in the production of leafy greens, the implementation of FSMA will be business as usual for Leafy greens growers in Arizona and California. “FSMA rules are very similar to current Leafy Green Marketing Agreement (LGMA) commodity specific guidelines,” explains Vicki-Lynne Scott Director of Quality Assurance for Amigo Farms, Inc. “In many instances, LGMA metrics are more stringent such as in the use of soil amendments containing animal manures.  LGMA does not allow the use of raw manure, only composts that meet the established metrics. The water rules also differ in that we will be asked for a mathematically different way to demonstrate compliance for irrigation sources – a statistical threshold value (STV).  We don’t anticipate this STV to impact current water sampling practices.”

Detailing NASDA’s concerns about the water-related FSMA produce rules, Ebhart during his presentation noted how little FDA regulators know about how farmers actually use water.

“Over this past year, FDA asked us to give them examples of the way farmers use water, and in almost every instance they said, ‘We didn’t know about that,’” he said. “The complexity of how water gets to a crop is kind of blowing their minds, but they should have known all of this before they wrote the rule.”

However, this is why Arizona and California instituted the LGMA to create standards and best management practices required to test water quality.

Under the rules pertaining to water use and produce, FDA assumes water is contaminated, rather than allowing “clean” water a pass.  The agency also “requires a frequency of testing we think could be less restrictive for some waters and says farmers can use only one method to test water—a method most environmental labs don’t use,” Ebhart continued.

Questioning how FDA was going to make sure foreign produce suppliers are held to the same standards as domestic growers, Ebhart asked how the agency was going to guarantee that the water used to grow fruit imported from Vietnam is as clean as that used in domestically grown fruit.

With FSMA’s produce rules raising more questions than providing answers in many cases, NASDA is in the early stages of piloting an On-Farm Readiness Review. Funded by FDA through cooperative grants, the OFRR will be a voluntary program under which farmers can have a third-party inspector visit their farm to determine how they would fare during a FSMA-related inspection.

The group is also developing an OFRR  tool kit that will include a detailed checklist that works the way a farmer would—from pre-harvest to post-harvest—and focuses on water, worker training, and wildlife.

“It’s also going to be an opportunity for us to learn from people who are way ahead of the curve. From them we can get better ideas about what should be part of our educational program,” Ebhart explained.

Arizona and California’s produce farmers and shippers that have signed on to the LGMA, might be considered that group that is ahead of the curve. Explains Scott, “The LGMA’s were the first to take proactive steps to prevent food borne illnesses way ahead of FSMA. FSMA projects many of the LGMA principles into the rule which will now cover nearly all types of fresh produce. Protecting the consumer with preventative controls during the production of fresh produce is one of the most important things we can do for ourselves, our families, and neighbors.”

Scott is one of five members the Food Safety Committee (governing board of Arizona LGMA) and is also the Chairman of the Technical Subcommittee.

Arizona and California LGMA’s are currently undergoing a line-by-line metrics review to bring them into step with FSMA requirements where needed and to obtain FDA’s of “comparable” to FSMA where applicable.