By Julie Murphree and Justen Ollendick, Arizona Farm Bureau: Quoting Herb Brooks, Jr., the American coach who led the 1980 men’s U.S. Olympic hockey team at Lake Placid to a Gold-medal win against the favored Soviet team, American Farm Bureau (AFB) Women’s Leadership Chair Sherry Saylor said, “We’re looking for players whose name on the front of the shirt is more important than the one on the back. I look for these players to play hard, to play smart, and to represent their country.” 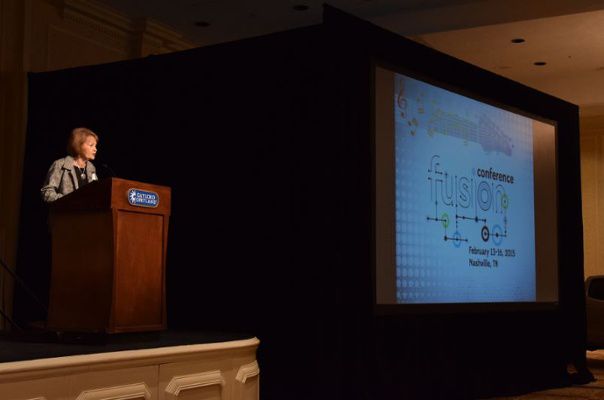 Arizona's very own Sherry Saylor, National chair of the Women's Leadership Committee, opened one of the general sessions last month during a national Farm Bureau conference that brought Women's Leadership and Young Farmer & Rancher leaders together.

In February, Saylor opened one of the general sessions of the first-ever AFBF FUSION Conference, designed to bring together members of the Women’s Leadership, Young Farmers & Ranchers and Promotion and Education programs for an opportunity to network, learn, collaborate and find inspiration.

Speaking to farm and ranch leaders of all ages from all over the country, Saylor added, “Leadership comes in many different forms, shapes and sizes, capacities, and angles. For most, our start in leadership began by getting involved in an organization that allows us to help others, build our leadership skills, and an organization. For us in agriculture, we too can say it’s what’s on the front of our shirt; we’re Farm Bureau Proud.”

And Arizona Farm Bureau’s presence was felt at this conference that drew an attendance of more than 1,300. With the various Farm Bureau counties sending Arizona Young Farmers & Ranchers and Women’s Leadership to Nashville, Tennessee. Members of both of these groups were able to participate in multiple breakout session (workshops) that furthered their leadership, communication, and even business skills. During the morning sessions, guest speakers told inspiring stories of optimism and concepts vital to personal and professional growth as individuals.

“To me, what Farm Bureau is really about is policy development, leadership and agriculture advocacy,” said Cassie Lyman from Coconino County Farm Bureau, who along with Vicky Parks -- also of Coconino County Farm Bureau and that county’s Women’s Chair -- represented the Young Farmer & Rancher program but also participates in the women’s activities for Arizona. “That’s why we’re here [at FUSION] and getting involved. It’s not to be in a position or whatever, it’s to preserve agriculture. Sometimes I think we try to get people involved just to get them involved but really the reason we’re here is to keep agriculture going.”

Lyman may be the perfect example of someone that can fit in all three groups. She participates in Women Leadership activities, is part of Arizona Farm Bureau Young Farmer & Rancher as the state’s Vice-chair and she likes the Promotion and Education Program since Ag in the Classroom is a priority of hers. “I feel that I fit in all three,” she said.

Two members of the University of Arizona Young Farmers & Ranchers collegiate chapter competed in the Discussion Meet, with one advancing to the “Sweet-Sixteen” round. Ryan Colville, a sophomore at the U of A said, “In my YF&R career so far I don’t think anything has benefited me professionally and personally more than competing in the discussion meet. It provided me with insight into how to study and understand a topic along with how to actively discuss the topic with individuals from across the country to reach a beneficial consensus. The skills I gained from the discussion will benefit me for my entire professional career.” 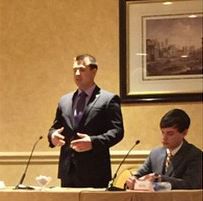 Ryan Colville competing in the "Sweet Sixteen" round in Nashville.

Farm and ranch families of Farm Bureaus across the nation raised more than $1.2 million and donated a record of nearly 42 million pounds of food to assist hungry Americans as part of Farm Bureau’s “Harvest for All” program in partnership with Feeding America. Combined, the monetary and food donations also reached a record level of the equivalent of more than 46 million meals.

During the FUSION Conference, Arizona Farm Bureau’s Young Farmer and Ranch program recognized as one of three state YF&R committees that received $500 grants from Chevrolet for “most innovative” programs.

Now in its 13th year, Harvest for All is spearheaded by members of Farm Bureau’s Young Farmers & Ranchers program, but Farm Bureau members of all ages from across the nation contribute to the effort. In all, 23 state Farm Bureaus and the American Farm Bureau Federation heeded the call to action. The joint effort between Farm Bureau and Feeding America, the nation’s largest organization, is a national community action program through which farmers and ranchers can help ensure every American enjoys the bounty of food they produce.

Women’s Leadership and Young Farmer & Rancher programs have a great heritage within Arizona Farm Bureau. The FUSION conference brought that all together and made it evident to the two groups.

Sherry Saylor added, “What a privilege to be part of the inaugural FUSION conference bringing what I call the ‘boots on the ground’ programs of Farm Bureau together. The Women’s Leadership Committee was very positive about sharing ideas and perspectives with the other attendees knowing that we all share the same goal of making agriculture stronger and Farm Bureau more effective.”

Saylor borrowed another famous quote from Coach Brooks by saying, “Great moments are born from great opportunity. I believe FUSION will help the various leadership groups within the Farm Bureau family prepare to turn the great moments before us into opportunity.”