By Julie Murphree, Arizona Farm Bureau Communication Director: In a rare show of bipartisan cooperation, both the U.S. Senate and House of Representatives passed legislation last month that creates a uniform, national labeling system for packaged foods. The vote was 63-30 in the Senate for the bipartisan measure known as the GMO Disclosure law and 306 to 117 in the U.S. House of Representatives. President Obama quietly signed the bill into law on July 29th. The law compels foods that include genetically modified organisms, better known as GMOs, to carry a text label, a symbol or an electronic code readable by smartphone. Advocates for labeling and the food industry, which has fought mandatory labeling, have wanted to find a national solution to avoid a state-by-state patchwork of laws. 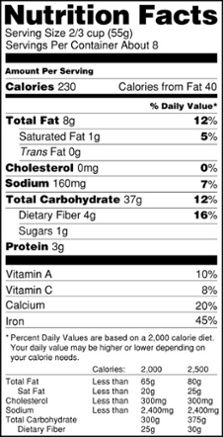 The Agriculture Department, which is charged with implementing the disclosure standard, issued a statement saying that a working group has already been working to “develop a timeline for rulemaking and to ensure an open and transparent process for effectively establishing this new program. We are committed to providing multiple opportunities for engagement, and will have more information about this very soon.”

The biotech bill mandates disclosure of genetically engineered ingredients but will allow companies to do it through scannable smartphone codes as an alternative to on-package text or symbol. The legislation is intended to nullify Vermont's first-in-the-nation GMO labeling law, which went into effect July 1 and has already forced major companies to start disclosing GMO ingredients on product packages.

The food industry and agriculture supported the bill, but many labeling proponents do not. Critics say the labels should be easily readable by consumers without and have complained that the measure lacks penalties for companies that don’t comply.

For those in agriculture, this unprecedented bipartisan cooperation means Congress appears to understand the importance of biotechnology in agriculture and that food companies need the flexibility in how they inform consumers.

“The passage of GMO disclosure legislation means we now begin the work of putting in place a uniform, national labeling system that will provide balanced, accurate information to consumers,” said American Farm Bureau Federation (AFBF) President Zippy Duvall. “Genetically engineered crops have a decades-long track record of safety and benefits for agricultural productivity and our environment. This legislation helps to continue those benefits by avoiding the confusion of differing and potentially misleading labeling standards from state to state. We are pleased that Congress has moved quickly to finish the job.”

“Agriculture and Farm Bureau across the country has worked hard to create some reasonable and workable policy on this matter and we applaud the bi-partisan approach,” added Arizona Farm Bureau President Kevin Rogers.

In the Senate, Flake voted “no.”

The Coalition for Safe Affordable Food (CFSAF) also applauded members of the U.S. House of Representatives that preempts Vermont’s GMO labeling mandate, protects American family farmers and small businesses and provides consumers the most ingredient information than ever before.

“After more than two years working with Senators and House Members from both parties, this vote is a resounding victory not only for consumers and common but also for the tremendous coalition of agricultural and food organizations that came together in unprecedented fashion to get this solution passed,” said Pamela G. Bailey, President and CEO of the Grocery Manufacturers Association and CFSAF co-chair. “Our entire coalition of agriculture and food groups sincerely thanks House Agricultural Committee Chairman Mike Conaway, Congressman Collin Peterson, Congressmen Mike Pompeo and G.K. Butterfield, Senate Agriculture Committee Chairman Pat Roberts and Senator Debbie Stabenow for their critical leadership on this issue, and all members of Congress who voted to create a more transparent disclosure system while preventing the costly effects of a patchwork of state labeling laws.”

Since early 2014, more than 1,100 food and agricultural groups have joined together in support of Congressional action to preempt Vermont’s law and pass a national, uniform food labeling standard that will provide consumers, and businesses a consistent standard that is the same across the entire country. Chairman Roberts has stated that he has never before seen the food and agricultural communities as united as they have been on this issue.

“American farmers rely on agriculture biotechnology to help feed a rapidly growing world population and this bill ensures that genetically engineered crops will not be stigmatized due to mandatory on-pack labels,” said Charles F. Conner, CFSAF co-chair and President and CEO of the National Council of Farmer Cooperatives. “This is a vote for consumers and farmers and a vote against the campaign of fear and misinformation by anti-GMO activists against this safe, proven technology. We look forward to President Obama signing this legislation, which will immediately preempt the Vermont labeling law that is already impacting shoppers and small businesses in that state.”