For a little background, President Trump today signed an executive order aimed at rolling back one of former President Barack Obama’s major environmental regulations, a clean water rule as Waters of the United States (WOTUS). 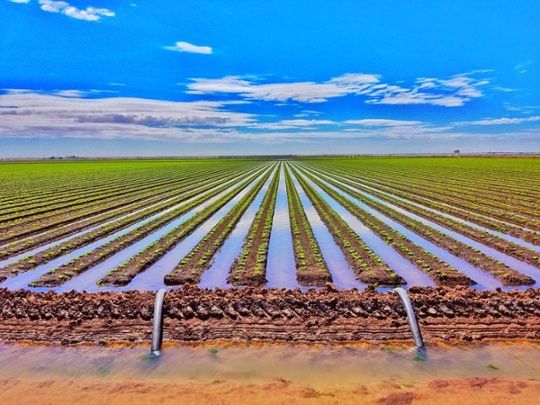 It's a bright day in farm and ranch country with today's action by the President regarding WOTUS. (Photo Courtesy of Jonathan Dinsmore, Yuma and active Farm Bureau Member)

Said the President after signing the executive order, “The EPA’s so-called “Waters of the United States” rule is one of the worst examples of federal regulation, and it has truly run and is one of the rules most strongly opposed by farmers, ranchers and agricultural workers all across our land. It's prohibiting them from being allowed to do what they're supposed to be doing. The Clean Water Act says that the EPA can regulate “navigable waters” -- meaning waters that truly affect interstate commerce. But a few years ago, the EPA decided that “navigable waters” can mean nearly every puddle or every ditch on a farmer's land, or anyplace else that they decide -- right? It was a massive power grab. The EPA’s regulators were putting people out of jobs by the hundreds of thousands, and regulations and permits started treating our wonderful small farmers and small businesses as if they were a major industrial polluter. They treated them horribly.”

Previously, the overreach of the EPA through WOTUS was so egregious that American Farm Bureau launched a campaign known as #DitchTheRule that actually garnered national attention. For farmers and ranchers all over the country, today marks a moment of celebration for all the tough lobbying efforts to protect their land, agriculture and a way of life.

What Our Farmers and Ranchers Said

“Farmers and ranchers have been calling for a common-sense approach to regulatory reform, and today the Trump administration responded to that call. EPA has too long been characterized by regulatory overreach that disregards the positive conservation efforts of farmers and threatens their very way of life. Today’s action is as much a beginning as an end, and there is much work to do to ensure that any revised rule is transparent and fair for America’s farmers and ranchers.”

Now let’s hope our president gets this trade thing right. American agriculture depends on global trade and the agriculture that moves around in Arizona and to other parts of the world is no exception.