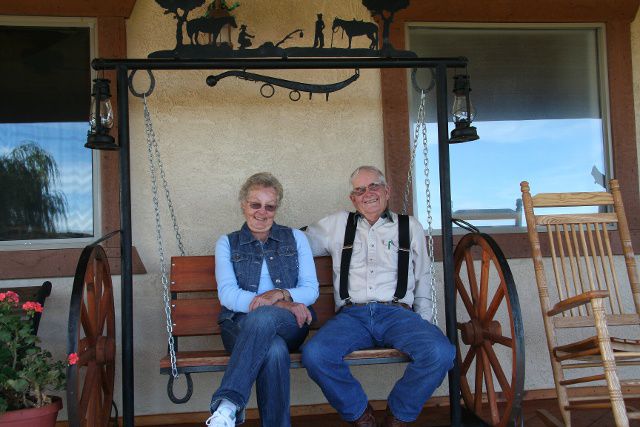 Phyllis and Jack Carlisle were Arizona Farm Bureau Heritage Award winners this last fall. They've ranched up north all of their lives and love the involvement they've had in the Farm Bureau.

He was part of the group that terminated the insurance partnership with New Mexico and voted to seek a partnership with other states including Kansas and Utah. Those votes and members created the foundation of what is now Farm Bureau Financial Services. Both Jack and Phyllis continued to be active many decades after serving as president. Phyllis served as Navajo County Farm Bureau Women’s Leadership Committee Chair and is an active Ag in the Classroom volunteer.

They both helped plan and participate in Navajo County Farm Bureau’s Meet Your Farmer or Rancher where they have a booth at the local farmers market and visit with patrons about agriculture and the farming and ranching community.

Navajo County Farm Bureau has history on their board due to members like Jack and Phyllis who, despite no longer serving on the board still participate in many of the county’s activities and programs.

Jack always tells everyone that he is in the grass business, stating “because you can't ranch without grass.”  The Carlisle’s have combined ranches, divided pastures, pushed trees, drilled well and built tanks with their own money to improve and conserve the land.

Many local Game and Fish personnel and locals have praised the Carlisles for the improvements they have made to the land. They have always taken a little extra care for the antelope and deer, making sure they always have enough water and clearing invasive trees so that the native grasses could thrive.

The Carlisle family have never been afraid to talk to anyone about the ranching life and all the benefits it can bring to the environment, many times talking to youth groups or other organizations.

Tell us about your agricultural operation: Well I was raised right here, right on the land I live on. It was part of my inheritance. There was 300 acres of deeded land and two homesteads that my father gave to me and my wife, Phyllis. Before I was married I acquired a 100,000-acre ranch from the National Forest (Service) right here around this property. It ran from about Clay Springs to Show Low. We ran that for 40 years, but it became pretty heavy and I was getting older and I couldn’t keep up so I said I was going to sell it and I did. In the meantime, I traded for a couple other ranches, one in Marana and one in Snowflake. We still have the one in Snowflake, my son owns it now, and I bought another one there where we run 60 head of registered Angus cows. That’s what we do; we’re retired, or we’re supposed to be. We farmed a little dry farm here on the homesteads for a lot of years, but we haven’t for a while now.

What changes have you seen in your lifetime as it relates to ranching? Our equipment has always been approximately the same, but we have a lot of newer equipment to work cows in. We worked with corrals and chutes and alleys and calf tables, but we’ve gone into the tubs which it simpler and safer. The main thing that has changed is our relationship with the government and trying to run this government land. The first twenty years I owned this forest it was kind of like it was yours, but then the last twenty years I owned it, it just grew harder and harder to keep up with what they asked you to do. We moved into a big rotation thing, and there was a lot of movement and it got to be harder because people would leave gates open.

Why did you go into agriculture? My mother came here from Oklahoma when she was four years old in a covered wagon and her father homesteaded here. My dad came out here about 20 years later from a farm in Alabama. Because both parents died he an orphan. He went into the oil fields to work there but a tornado blew it all down. Then he got hurt in a explosion and a bunch of the guys on his crew died. Through it he managed to live and came out here to recuperate. He really liked this area so he moved out here and he never went back. He said, ‘What’s wrong with Arizona is what I like about it. They don’t have tornadoes and they don’t have floods.’

He farmed here. He had these homesteads and kept putting them together until he had several sections of land here. He farmed those and grew wheat. All through World War he grew wheat. In fact, he was deferred from the service because he was growing food. We had and you’d have to tie the sacks by hand. I tied the sacks when I started when I was 8 years old. I’d tie the sacks and he’d stop and let me get them off the combine. So I’ve been involved in agriculture all my life.

Will anyone in your family – the next generation – pursue farming or ranching? We have three sons, one in Tucson that works for Tucson Electric Power, one in Holbrook that has a hardware store and one that lives up on the ranch west of Snowflake. He likes to ranch but he’s let me know he doesn’t want this ranch, he doesn’t want to deal with the people from the Forest Service. My youngest son and his three children live on the ranch and ranches. He’s been ranching all his life. He does a lot of other things, but that’s his main thing. He runs about 150 cows.

I wish it was bigger but he’ll get mine that I have if I ever relinquish it, but I haven’t got that far along. My grandkids are in 4-H, and they are highly competitive. They go with their daddy everywhere and help him. They help keep the books, and of course, the registered cattle require lots of bookkeeping. They’ll all stand there with their mom and dad and everybody’s got a little job. So yes, they’re all involved. Especially the girls, they’re good at keeping records. Give them a pad and tell them what to write and every time they do a good job. They’re also great students. We went to an honors thing the other day and all three of them made the Principal’s List!  We also have a granddaughter that’s married to a boy in Taylor, who was born on a dairy there, and they’ve got a string of my registered cows there. They farm and grow corn and then they harvest it and sell it by the barrel. People come from all around that area and buy the barrels to feed their animals. They sell hay, so they’re very involved. I have another granddaughter who is married to a man who had nothing to do with agriculture, but he lived up here and he’s moved now, but when he was here he was always out when we worked the cows. He loved to do that. I’m sorry he moved away, but he told me the other day, ‘You tell me when you’re going to do that and I’ll take some time off. I want to come back.’

Did you ever change or consider changing your ranch model or ranch and different breeds? we had four or five different breeds of cattle on our ranch from time to time. We started with Hereford cows back in 1964, and how did we change those? We went through Beefmasters, a crossbreed between Angus and Hereford, and at we were all Black Angus.

What is one fact or achievement no one knows about you? We go to the Baptist Church and these Baptist churches up here are small, and so not a lot of people know what you do, but I am a congregational music director in our church, and I have been all my life since I was 18 years old. I have been blessed with wonderful, especially talented pianists and organists that have helped me through the years.

I did one other thing in my career that not many people have done. When I got married I was 28 years old, and my pianist and I were good friends, and she said, ‘I want you to sing to your wife when she comes down the aisle.’ I said, ‘I’m scared to death, I can’t do that.’ She said, ‘Nope, I’m going to help you.’ So I did. I sang to my wife as she came down the aisle. I sang ‘Each for the other and both for the Lord.’

What do you think you do really well? I’ve been commended for being honest, even by the government. When I was running this ranch we used to have range tours, and one of the fellows who was over me in the Forest Service said, ‘There’s one thing about Jack Carlisle, you can always depend on him to tell you the truth.’ That’s been a habit of mine, I want to be honest. Even though it may not help me out, I’m not going to lie to enhance my position. When I would see a problem, I’d walk into the Forest Service office and say, ‘We’ve got a problem. You’re the boss, let’s see if we can solve this together.’ I’d already a solution in my because I could usually make them believe my solution was a good one. If I couldn’t, I want them involved so when it comes down to it, if it didn’t work, we’re all involved in it. Honesty is the best policy, and that’s what I practiced all my life.

How will the next generation of farmers have to operate? We will be inundated with more rules and regulations, but we will cope, and we will keep farming because we like it. It’s in our blood, it’s in our genes, and we just keep doing it. We’re going to raise kids who want to keep doing it. I think it’s going to be harder, but we’ll try everything we can to educate people.

What is the best business advice you’ve ever given or been given?  Don’t get into debt. I’ve had debt all my career, some kind of debt. I started off with a $500 loan when I was a sophomore in high school for an FFA project. From that day until about 12 or 15 years ago I had debt. A time or two it’s been high. We 18% interest, and it almost bankrupted us. In the last number of years since we sold the ranch, we don’t have any debt. We don’t owe anybody anything.

My youngest son, who is in the ranching business, has no debt. He borrows a little money, but this boy does not like debt. He’s done well doing that. He isn’t the traditional rancher, he doesn’t buy cows the way I do, he doesn’t do anything the way I did, but he does a good job and he’s making money. I like what he does. He thinks I don’t, but I do because he stays out of debt, and he can do what he wants to do. You have to admire him. We have to manage our debt. If we can’t manage our debt, we’re in trouble. I’d rather have it be little and in control than big and out of control.