By Julie Murphree, Arizona Farm Bureau Communication Director: Over the last 20 Harold Maxwell has been actively engaged in representing Yuma’s agricultural interest on air quality. He has specifically been involved with working to change the PM10 nonattainment status of Yuma County. As one of a few private citizens involved in this he a unique perspective to what Yuma and Arizona will be facing with the new Ozone regulations. 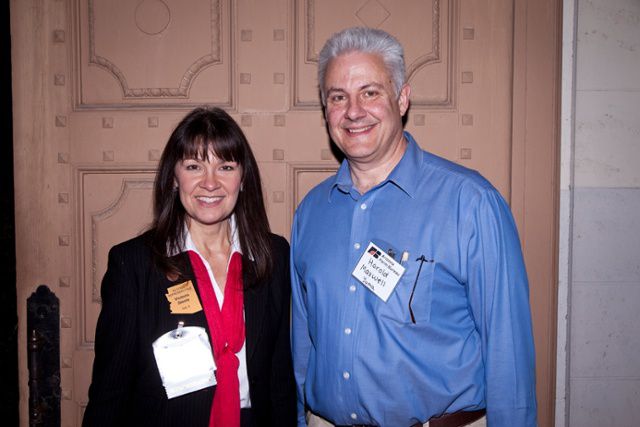 In 2012, Farm Bureau Leader Harold Maxwell from Yuma, along with other Farm Bureau county leaders, hosted various state legislators during the annual January AgFest at the Arizona Department of Agriculture. At the time, took House of Representative Victoria Steele (D- Dist 9) to the various county agriculture booths to explain our state's agriculture and highlight important farm and ranch issues.

As a result, local governmental agencies started to use the Heritage Area designation to restrict individual property rights. Harold testified before a subcommittee of the U.S. Congress about the negative impact the bill was having Yuma County. On October 2006, the bill was amended. Now the Yuma Crossing National Heritage area is a jewel in the Yuma area that enjoys large public support without impacting property rights.

Tell us about your agribusiness experiences. What do you do? In agribusiness, I’m currently employed by Bingham Equipment Co. in Yuma and have been involved with mechanized agriculture for over 30 years.

I’ve been married to my wife, Irasema, for 35 years and have a son and daughter who live and work in Arizona.

As an agriculture equipment specialist, can you highlight the technologies in the equipment that help with water conservation, soil health or and other special agriculture improvements? As a mature industry, agriculture can be viewed as not being innovative. Nothing could be further from the truth. Innovation thrives in our industry. I will share just a few items from the field of mechanized agriculture.

Global positioning systems (GPS) has revolutionized agriculture. From systems that steer tractors, to application equipment and mapping software the whole industry has changed. We are now able to farm at times during the day or night that we could not before. Another benefit is the minimization of overlap. This has led to cost saving to the producers while minimizing environmental impacts of dust production as well as the potential for over application of chemicals and seed.

Telematics is now the next evolution in GPS Technology. Telematics allows the operational data such as acres per hour, gallons of fuel, etc. of a mechanized unit to be transmitted back to the farm office for processing. We now have a better understanding of what the true cost-per-acre is to produce a crop by individual blocks on individual farms.

Single pass tools are being widely accepted. They do not replace every operation but where they can be used multiple are eliminated which reduces wear and tear on the lowers cost of operation as well as minimizing dust production.

The most recent technological change in the mechanized agriculture is the introduction of the Tier 4B engine. When the new emissions were mandated by the EPA, the industry had figured out how to accomplish this. The solution that the manufacturer I represent came up with saved the grower at least 10% on his fuel bill helping to offset the increased cost of the unit. The emissions reductions are significant. A current Tier 4B engine would have to run 180 days to put out the same emissions of a Tier 2 unit built in 1996. This improvement will help the Agricultural industry meet the PM10 and Ozone restrictions being placed on us by the EPA.

All of these technologies require a much tighter partnership between the grower and the supplier than ever before. It is these tight partnerships that will ensure the farmer maximum returns from these investments.

What is your educational background (i.e. Degree(s), certifications, honors)? I have a B.S. in Agricultural Business Management from Cal Poly in San Luis Obispo and an MBA from the University of Colorado.

What do you enjoy doing, and what is one fact/achievement that nobody knows about you? In my down time, I love to Backpack and Fly fish. I spend about two weeks or more a year living out of a tent in a remote area. Arizona is a fantastic state for this. From Aravaipa Canyon down by Tucson to the San Francisco Peaks in Flagstaff, Arizona has the most varied backpacking and fishing areas in the country.

One thing that most people do not realize about me is that I am an accomplished sailor. I spent a good portion of my life sailing on the lakes and off the ocean shore in California. I do not get to sail very often and sold my boat a while ago, but I never miss a chance to go sailing.

Why are you a Farm Bureau member? The reason that I am a Farm Bureau member is that I LOVE agriculture. I cannot think of a higher calling than to be a small part of an industry that helps feed and clothe the world. as there are fewer of us involved with agriculture the general population has no idea of what and why we do things.

This leads to bad legislation made out of ignorance that drastically impacts our industry. We need every voice we can find to standup and tell our story because if we don’t no one will. We do not have the luxury of letting someone else speak for us even though I am uncomfortable speaking in public. The voice of an individual speaking from the heart stuttering and stammering will always have more of an impact than the professional orator. 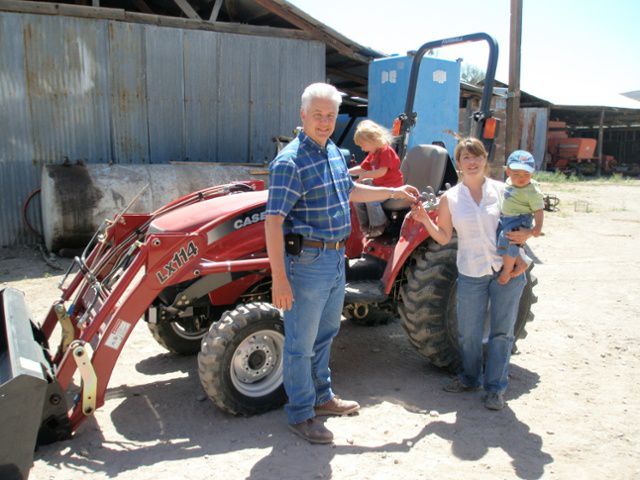 In 2008, because of his role in the agriculture equipment business, Harold Maxwell had the honor of presenting the Smallhouse farm and ranch family with a new tractor. He had handed the keys of a new Case IH DX compact tractor to Stefanie Smallhouse. Andrew and Stefanie Smallhouse won runner up in the YF&R Achievement Award receiving a Case IH DX compact tractor, courtesy of Case IH, and a $500 product voucher from Valvoline during American Farm Bureau Federation Annual Meeting back in 2008. They were one of 10 other couples that received top honors for their agriculture practices and management of their farms and ranches.

You obviously have a passion for agriculture and Farm Bureau. We’re also aware of your extensive involvement in dust control issues. Tell us about it. we were asked by the Yuma County Farm Bureau Board to attend a PM10 meeting and find out what was going on. We knew it was important because our industry does produce dust and wanted to find out Agriculture’s part in this issue. It became very apparent at that first meeting that the decision had already been made to control the dust problem and that agriculture was the target. The “solutions” being talked about would have effectively put agriculture out of business in the non-attainment area. From that moment on we knew we were in for the long haul.

What were the biggest issues and challenges faced by Yuma County farmers with respect to the Yuma PM-10 nonattainment area and how did you help resolve them? The two main issues that agriculture had were that the EPA and ADEQ were using the wrong acreage calculation about the amount of PM10 dust being generated and the lack of understanding about our agricultural practices in Yuma. EPA had used the Total Acreage Reports from the USDA which the total production in a county. The report does not distinguish between acreage that is being double cropped. EPA was using 235,000 acres in their modeling while we only have 175,000 acres in the entire county. We were finally able to get them to adjust their total acreage to the acres that the Water Districts in the non-attainment areas were providing water . That number came to less than 60,000 acres. Once EPA/ADEQ did this their predictive models worked much better but they were still off. That is where their lack of understanding about agricultural practices causing us problems.

The two main agricultural practices that we had to deal with was EPA’s perception that every acre in the non-attainment was burned every year and that the acreage on average sat fallow for at least six months. We were able to show EPA/ADEQ through farm tours, burn permits issued by Rural Metro, and the cropping patterns reports from the USDA what was really going on. We also provided them with research from the USDA station in Lubbock Texas. That report showed that the monitor they were using was inaccurate for reporting PM10 produced by agriculture operations. The PM10 number that was being reported was based on a calculation performed on the sample. The size of the dust particles from Ag operations was much larger than was expected. This lead to an over estimation of the portion that was PM10. When EPA made this final adjustment their predictive model worked and the big bullseye was removed from Yuma Agriculture. Even after this, EPA could not let any potential PM10 generator off of the hook.

That is where the Ag BMP’s came from. EPA wanted every contributor, no matter how small, to make an effort. We were able to take some of the BMP’s developed by Maricopa County Farm Bureau and integrate them into a list for Yuma County. The beauty of doing it this way was that these were commonly accepted practices that were beneficial to the crops as well as reducing PM10. We had been doing them all along but no one knew what Agriculture was doing.

How frequently have you had to deal with PM-10 issues over the last 20 years? I would say at least 3 times a year. I may be underestimating this number as it seems to be the gift that keeps on giving. Now we are involved with ozone. Our PM10 experience has prepared us for this latest air quality issue. Our PM10 experience has taught us the importance of getting in early and being very aggressive towards the EPA.

Finally, everything you can to get things changed or excluded prior to the final ruling. Once the final ruling comes down it is almost impossible to change. Twenty years later we still get reports showing that there are 235,000 acres in the non-attainment area. Once it goes to print it lives forever.

Share information about your leadership roles/involvement in Farm Bureau and the community. I am also on the board of Hospice of Yuma having been a past President and Treasurer, current District Chairman for the Ocotillo District of Boy Scouts of America, Cubmaster for Pack 8054, an Elder on the board of Sierra Vista Presbyterian church as well as on the board of Casa Sierra Vista which provides housing to seniors. I am Project CENTRL alum, class XX.