By Julie Murphree, Arizona Farm Bureau: As their website says, “The Fort McDowell Yavapai Nation is a 950-member Native American tribe that calls Central Arizona’s upper Sonoran Desert home. Located to the northeast of Phoenix within Maricopa County, Arizona, the 40-square mile reservation is a small part of the ancestral territory of the once nomadic Yavapai people, who hunted and gathered food in a vast area of Arizona’s desert lowlands and mountainous Mogollon Rim country. It’s in this setting that Harold Payne has managed the 2,000-acre farm for more than 20 years.

An interview with Harold Payne of Fort McDowell Farms.

Talk about Fort McDowell Farms: We have 2,000 acres in production. Half of that is pecans, as well as 300 acres of citrus, and the remainder farmed is alfalfa and barley. We are on about 25,000 acres (4 miles long and spans 12 miles wide) of the Fort McDowell Yavapai Nation. The land is near Fountain Hills and the Ft. McDowell casino. Our citrus ranges between five different types: primarily lemons, tangelos, tangerines, navel oranges, and grapefruit. 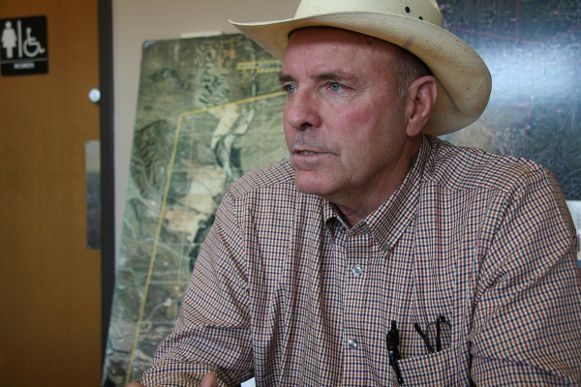 Harold Payne  I look at agriculture as a miracle, the combining of water, and sunshine to produce marketable commodities.

The Yavapai tribe has been farming this area since the 1980s. The reservation was given to them in 1939. In the early they hired an engineering company – who I happened to be working for at the time -- and the tribe had the canal lined and the fields leveled. In 1990 the tribe settled their water rights with Salt River Project.

If you go way back, this land was farmed in the 1800s by Hispanic families, growing alfalfa for the U.S. Army horses.

So what is your background? I come from farming. I was born in New and grew up in the Safford/Thatcher area. My grandfather moved to the Gila Valley in 1908, and bought land and farmed with his sons. I grew up over there until I was about fourteen. I graduated with a degree in Agriculture from Brigham-Young University in and continued my master’s degree at the University of Arizona in 1976. I worked for an agriculture consulting company for about ten years post graduating, checking farms. I did get the chance to work with a team of water rights evaluators.

How do you see the future farming in Arizona through your vast experience in the agricultural industry? A lot of the future of agriculture in our area is in the hands of the Indian reservations, as they have been assigned most of the available agricultural water. The Gila Indian Reservation owns about of the CAP, and have a vast amount of excellent land for farming, so the potential for them is great.

Would you ever consider growing an emerging crop or changing your farm model?  there is only one problem. We just don’t have water. As the orchards got bigger, I had to take half of the alfalfa out and put in barley, because the orchards needed more water. The way that the water right is structured, we get a certain allocation every month, and in the winter time if we don’t have crops using it we lose it. However, at the end of the month, it resets. The only for example, is that if you didn’t use January’s water, its’ gone forever, no roll-over so to speak.

Because of the limited water availability, you can’t really expand the agriculture revenue stream on behalf of the tribe, correct? Only if we switched to a higher-value crop. We could develop more because there is no limitation on what land we could develop, but there is just limitation on how much water we can use. The barley was introduced to maximize the use of those months’ water when the orchards and alfalfa are dormant.

What’s your market for that barley? We generally have contracts with Arizona Grain; it goes into the feedlots and the dairies. That’s the amazing thing about barely. Barley is very productive as far as the cash flow and revenue because planting one semi-load of seed in November results in 70 semi-loads back. All of that happens in five months, so that’s a good return on your money. It’s just one of the many reasons I love agriculture. I look at agriculture as a miracle, the combining of water, and sunshine to produce marketable commodities.

If you look at our farm right now, we have nothing to sell [Interview conducted during dormancy of the citrus orchards]. The hay is in the field awaiting warm weather, the barley is growing steadily, and the trees are dormant. Come back a year from now, and we will have sold 13 million pounds of products from this little property. Two million of that are pecans, four million in citrus, and the rest is barley and alfalfa.

What do you see in the future knowing that water is probably your only constraint? Well, we are pretty stable because this river has never been dry in the history of mankind. The Verde has always had water in it. We have a really good water shed located upstream from the farm -- there are two dams on the Verde River, and SRP is very diligent in how they operate them.

People don’t realize how neat agriculture is in this area, especially when most are floating down the Salt River just a few miles from here… We are kind of an untold story of a Native American Tribe developing their resources to become self-sufficient. The nice thing about the farm is that it is sustainable, and it is permanent. Although, the tribe has thought about diversifying into more enterprises.

mentioned your relationship with the tribal leaders? I prepare a budget and a business plan for the farm every year. We review the farm’s progress and performance regularly and update the crop plans according to current and future market expectations. The Tribal Council and administration also have very heavy schedules and keep very busy so I prepare information summaries to keep them informed about their farming enterprise. I actually started with them as a consultant doing the crop studies, and then I was brought back to determine the operation’s needs (irrigation set up, etc.). I also did soil sample testing since I am a soil scientist, which helped greatly to site the orchards properly. We are an extremely viable and productive entity for the tribe, so they are very pleased with the outcome of this operation.

Although in agriculture there can be tough years, you can say that you have had profitable years for them? We have actually never lost money on our operation, but there is no guarantee that losses could not happen here. We are self-financed so we do not have to borrow money from anyone, and we keep what the farm needs to operate, and then the rest goes back to the tribe.

With Agriculture in Arizona shifting, do you see agriculture growing, shrinking, or staying the same size wise in the future? I see it shrinking, for several reasons. One the pressure of urbanization and development continuing to compete for water supplies, more and more water constraints on existing agricultural operations; even if the water is available, it can be so expensive that it makes it hard to farm traditional crops with it. It also takes an extremely competent manager that has a very precise management structure to maximize the returns of an agricultural enterprise. The markets can be very volatile, so only certain people are going to be able to get in and operate a profitable farming operation. For one thing, you can flood the market with too many vegetables at a certain window making limitations on those types of crops. Whereas cotton or barley, there will always be a “home” for these crops but market prices determine whether they are viable or not. as the farms get smaller gets harder to farm because of farming restrictions in urban areas, even having to move machinery around can be difficult.