By Julie Murphree, Arizona Farm Bureau: As the Ranch Website says, “For more than 60 years, the Morrison Family has been deeply rooted in the Town of Gilbert, growing cotton, corn, and alfalfa on its 3,000-acre farm. Today, three generations of the Morrison family are actively associated with transitioning this land into Morrison Ranch — a unique, master planned “community with character.”

“Young Howard and Leatha Morrison trekked a thousand miles west from Oklahoma in the early 1920s, only to find that times were just as tough for dirt farmers in Arizona. Even so, they dug their roots deep into the small farming town of Gilbert. They humbly cleared land for others before finally acquiring a parcel for themselves — and their new sons, Marvin and Kenneth, and daughter Betty. The rest is history.

"Over the decades, the second generation of Morrisons transformed the family’s small landholdings into one of the East Valley’s biggest farming operations, including several square miles of cropland and one of the world’s largest dairy farms, as well as one of Arizona’s largest ranching businesses (grazing cattle on over 400 square miles of state and leased land stretching from Flagstaff to the Verde River). Although Kenneth and Marvin have passed away, the Morrison Family legacy remains. Kenneth’s grandsons, Dustin and Denton, continue to actively manage the family's farming and cattle operations."

But, this is only part of the story. Partnered with her husband, Marvin, in countless endeavors over the years, June Morrison, at 91, can recount so many special stories unique to life they would fill a book …or two. And, before marrying Marvin, June was a Neely. Their farm family stories could do the same. So, Arizona Farm Bureau wanted to learn a bit more about the farm family merger of the Neely and Morrison families. 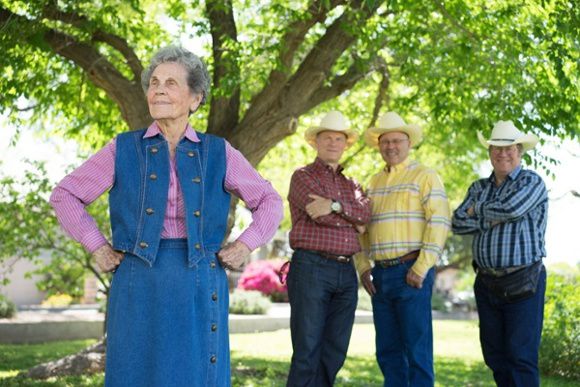 At 91, June Neely Morrison is letting hardly anything slow her down. Her Arizona agriculture family heritage is reflected in her own Neely family history. Her three sons, Howard (left), Richard (center) and Scott are also helping forge the Morrison family farm legacy. (Most photos by Carl Schultz)

Part of an ongoing series about Arizona farming and ranching families.

Tell us about life growing up in the Neely farm family. Also, tell us about your life raising the three Morrison boys, Richard, and Howard. Of course, I grew up right here where I’m sitting [June lives in the original Neely farmhouse on Elliot between Gilbert and Cooper Roads]. My family was always in farming. My parents moved here from Texas, where I was born in 1924, from a dry-land farming operation to Arizona, where there was irrigation. My Dad, at one had been a Watkins man [door-to-door home products], but that didn’t last long.

I was actually born in Texas. I was less than a year old when we came to Gilbert, Arizona. And I do mean Gilbert. We stopped in Cochise to see my mother’s parents who had a cattle ranch and then we came on to Gilbert. My brother tells me we lived in a rented house in Gilbert for a while until my father leased some land and started farming here.

When very little, I guess I liked to stay on my mother’s lap a lot because I remember mom saying one time, “You know I just don’t have any more lap.”

We had very little but we had each other. There were six of us so we always had chores to do, especially as we grew older. On I remember helping mom cut up and clean six chickens and bake six pies. I didn’t work in the fields.

I also helped my mother in the yard including growing flowers. I would also help with the garden.

There were six children, so eight of us, and if anyone else came along, mom was always cooking on the stove. I remember wash day, the meal was always beans, pinto beans. Pinto beans with ham in them. They would cook all day long. That was the staple for wash day.

Of course, because of the times, we had horses. Everyone would come in at noontime after having been out all morning, put the horses in the corral, take the harnesses off, and head to lunch. Then after lunch, they’d have to put the harness back on and go out to the fields again.

The saying that my oldest sister said was, “horses, horses, crazy old horses.” Very appropriate because they would always talk about which one was stubborn, which one would do this and which one would do that. We got to know our horses so intimately back then because we were so dependent on them as . But, of course, we also had a car and pickups and trucks. In later years, tractors.

[After World War II, American farmers traded in tens of millions of horses for tractors.]

We always had at least one or two milk cows. It was mother’s job to milk the cows. That was the only thing that she insisted that we didn’t need to learn how to do. She’d say, “If you don’t know how maybe you won’t have to milk the cows.”

We all wanted the milk and naturally living on a farm during the depression we were not in bad shape, and most farm families were because we always had plenty to eat. We raised chickens here. My mother grew vegetables for a garden. She always had a garden, usually at the head of the field:  Zucchini, black-eyed peas, melons, and more.

My father grew cotton and alfalfa, the staple crops so well known in this valley and small grains including Hegira, a grain sorghum for animals.

I met Marvin [Morrison] in 5th grade. He came into the class and we alphabetically and Neely followed right after Morrison and I sat right behind him, all through grade school. We went to Gilbert High together and even followed each other to Redlands College, now of Redlands, originally a Baptist college. My major was music and I received my teaching degree.

Marvin, of course, came from a farm family too. In college Marvin’s major was music also. Of that was one of the things that kept us together during our school days because I would accompany Marvin on Piano. He played the violin.

We knew early on we would marry. He wrote on his hands MM plus JN in the 6th grade. That was a lifelong thing. He’d always write notes on his hands. 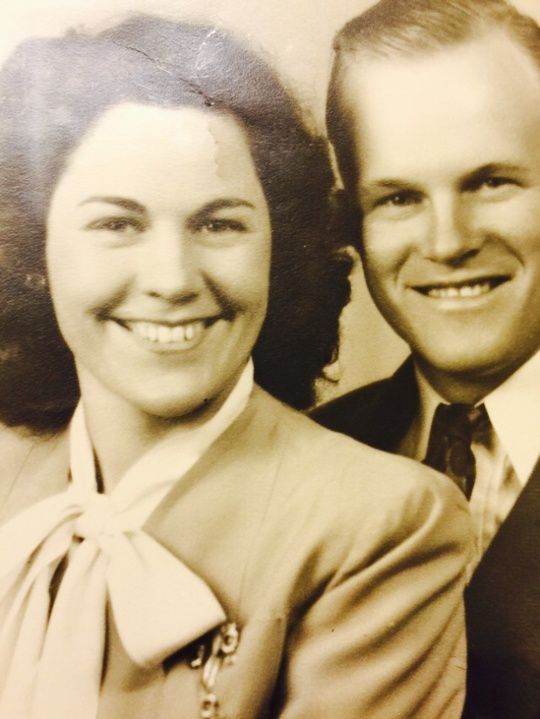 June and Marvin Morrison: June said they knew early on they would marry: "He wrote on his hands MM plus JN in the 6th grade."

Each one of them had bank accounts when they were teenagers and all of them were Arizona FFA officers. Besides earning good grades in school, Richard and Howard played team sports and Scott liked swimming and rock climbing.

They worked in the field and primarily in the alfalfa fields with the tractor, sometimes working a 12-hour day. I later found out that they would "race" the tractors in the field!  Boys will be boys!

Someone said to me once, “why are they working so long in the fields?"  And I said, “Because they need to know how to manage a farm in case of necessity."

Because I had boys, I feel that I have of the males and generally find I can talk to men easily.  I have fixed many meals for an all-male table. I was the "household" executive. 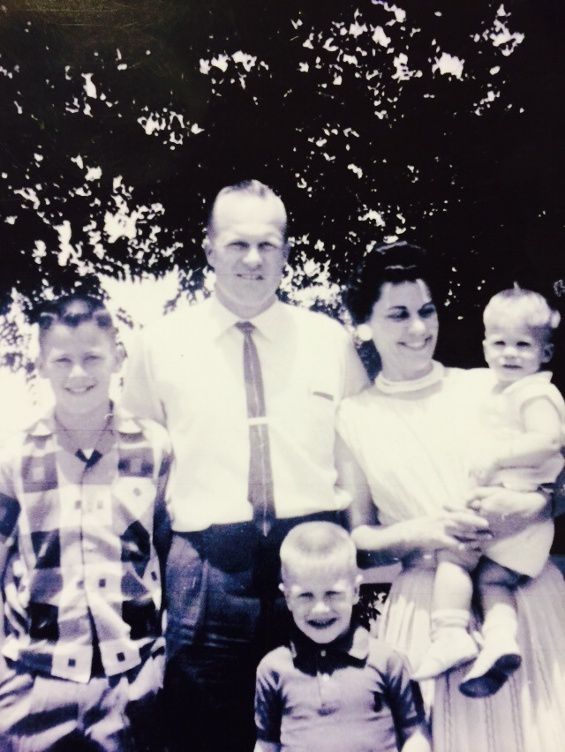 Marvin and June's three boys were hard workers but found time for a bit of fun by racing the tractors in the fields.

What changes have you seen in your lifetime as it relates to farming and/or ranching? Probably the number of controls the government has on farming today compared to the early days. I kept books for seven years and in the office two years after that. I would file papers for the government and before I finished filing the latest stack of government papers, they would be superseded by another set that had come in the mail. They just came so often.

It was a bit discouraging.

Why did you choose to go into agriculture? I didn’t choose (chuckles). Marvin saw that my dad was so successful at farming that he wanted to measure up to my dad. My dad had 1,200 acres free and clear and each of us (the Neely children) got 200 acres. So Marvin felt a bit of pressure from that (she chuckles again).

The generations on either side, do they go back quite a bit? Oh, yes. On the Neely side at least to my own great-grandfather. I hear stories, and in the Neely history book, that the agrarian family lines settled somewhere in the and in Pennsylvania. My dad always considered himself a Texan.

But none of my grandchildren are pursuing agriculture.

What are your community activities? Why are you involved? Marvin was on the school board 13 years maybe more. We were both on the Chandler Hospital boards. Marvin was always on Rotary. In fact, he was 29 different organizations at one time. I know that some were in name only but he was always in Maricopa County Extension or the FFA board or 4-H.

Personal point of pride for you? I’d say serving as the organist for our church [Gilbert Methodist Church] for so many years [38]. Marvin and I loved music. He would play the violin and I would accompany. Plus I was president of the Chandler Hospital board for two and a half years. 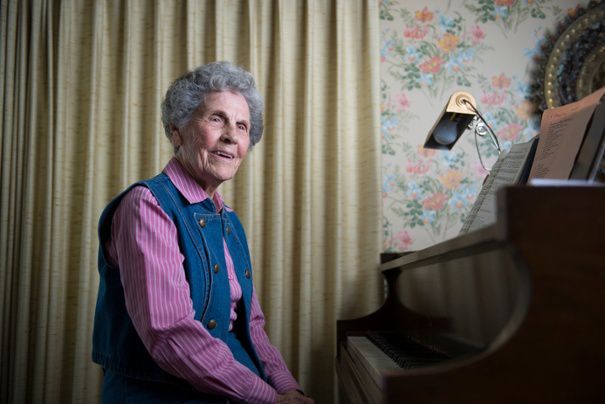 June and Marvin had a mutual love of music and would accompany each other for a variety of occasions including family gatherings around the Piano. Marvin played the violin.

One of the most important things I think I did was help Marvin recover from a serious head injury after a garbage truck hit him broadside in his truck right on Val Vista and Elliot in 1967. He had a tube everywhere you could put one and he was unconscious for two weeks. His brain injury was in the frontal lobe. It took him over a year to recover; he was only 44. We all considered it a miracle that he recovered.

What do you think you do really well? I’d love for you to answer about Marvin and also about you. One of Marvin’s greatest assets was that his leadership ability was very strong.

We were a unit. I kept the farm records for 7 years, until Scott was born, and later about 2 more years in an office setting.

One theme that underlined everything we did had to do with responsibility.

Why are you a farm bureau member? For it was the career organization for the business. It so happened, among the other things he was good at, he read a lot and could focus on what industry leaders needed to do to protect the industry.

How will the next generation of farmers need to operate? Well, I hear and know because of automation agriculture may be able to streamline the labor force since everything is becoming so automated. That’s a huge change. We’ve automated so much in agriculture already, think of the cotton picker that emerged in the 1950s. Some of the biggest advances in technology came about right after World War II.