By Lauren Scott, Arizona Farm Bureau Intern: Scott McDaniel can trace his family’s history in agriculture back generations, and across the United States. From farming to ranching, his family has done it all.

Now Scott does it all. Whether it is brokering cattle, running a rodeo, or spending time with family, he’s is always on the go.

Tell us about your farm, ranch, or agricultural operation. My family has ranched here in Arizona forever. My mother’s grandparents came out of and came to Mesa in the 1920s; Henry and Mabel Davis. After Mesa, they went back up to Fish Creek. You can find Davis Wash up there, which is their old ranch. 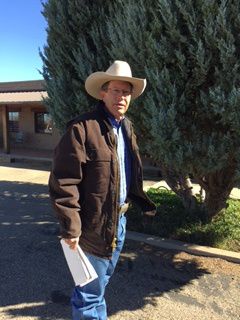 My grandparents, Mack and Helen Hastings, went to Idaho and grew potatoes for a few years. When they came back to Arizona, they went out to Queen Creek. They bought some desert land, pulled the cactus and the mesquite out, plowed the ground and started farming. They formed a partnership with another family called Santan Village. The corporation owned up to about 3,100 acres of productive farm ground. They farmed potatoes there up until the early 1990s. The farms were all sold off, and the land is now in homes.

If you’re familiar with Queen Creek, the subdivision called Hastings Farms is named after my grandparents. In the 1950s, Grandpa and Grandma Hastings bought a ranch in New Mexico and had some lease ranches out here in Arizona. That’s how they got into the cattle and beef industry. Just yearlings, not a cow-calf operation.

I’ve been in the beef industry my whole life. Farming was a big part of our family, but I liked the cattle part of it better. I moved to Sonoita, Arizona in 1988 or 89, and I have brokered Mexican cattle since 1980 with my father, Lawrence. I worked with him until the late 1980s, and then I moved down here on my own. I’m still brokering today. Depending on the season there’s anywhere from 80,000- to 90,000-head a year. My biggest year was 142,000 head back in 2013. This business is something I really enjoy, and I have no intentions of retiring.

We also have a rodeo company and put on rodeos here in the state of Arizona. I’ve been doing that for 33 years. It’s called Slash M Rodeo Company. We’ve got some mares and a stallion, and it’s kind of a hobby, but we like to see what kind of horses we can raise. We’ve got race horses too. It’s a fun life.

Will anyone in your family – younger generation – go into farming, ranching or agribusiness? I have two daughters and a son. My son, Jake who is 31, works with me. My oldest daughter is part of a property management program in the Valley and my middle daughter just changed positions, but she has been an elementary, special-education teacher for probably eight or 10 years.

What changes have you seen as it relates to agriculture over your lifetime? Since cattle are my focus, I can speak a bit about industry, and the quality issue. Quality and the genetics have definitely changed. That’s been going on since the history of time, but it’s unreal how the quality of cattle has changed for the better.

I get to travel all over the state of Sonora in Mexico, and somewhat the state of Chihuahua. I’ve met with a lot of ranchers and a lot of people in Mexico.

Do you participate in any community activities? Other than the rodeo I’m a part owner of the Wilcox Livestock Auction. But other than that I don’t have a whole lot of time, and I don’t like to do things halfway. I’m a father and a grandfather and I really believe that the time I have now is the time I need to spend with my family.

Why are you a Farm Bureau member? Farm Bureau was the insurance company my family used when I was a kid. When I got older and realized that I needed health insurance and life insurance, I got into their insurance. I guess it’s just kind of a family tradition.

What is something you enjoy doing, or something no one knows about you? Something I like to do in my free time as far as a hobby is running race horses. I would like to go into the production side of horses and breed my own.

What is the best business advice that you have ever given or received? This is advice I received: I was about forty years old, and a guy I admire today and will admire forever had accomplished so much in his life, so I asked him what his secret was. He said to never be afraid to take a big shot, or chance, a time or two in your life. If you are a hard worker, take a shot at something, whether it is a ranch, a farm, and don’t wait too long. Don’t sit around and think something is going to happen. You have to make your own way in life.

There is unemployment; people that are hungry, and this is my advice: Hard workers are not hungry, and they are not unemployed. Hard-working people always have a job, whether it’s a job for yourself or for another person. So work hard and go after your dreams. Also, friends and family are really important. They make life really joyful.