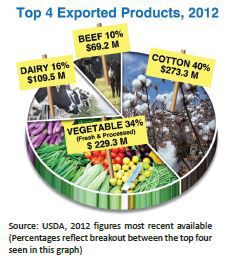 “Opportunities for improved trade is good news for Arizona agriculture as we export $1.26 billion in agriculture product around the globe. Cuba will certainly increase that number,” said Arizona Farm Bureau President Kevin Rogers. “We appreciate the hard work and leadership Senator Jeff Flake has shown on this issue.”

Currently, U.S. farmers can export to Cuba, but third-party banking requirements and limited credit financing make it harder to compete in the market.

“The president’s opening to Cuba promises to improve trade conditions by making it easier for Cuba to buy U.S. agricultural and food products. This is welcome news for our nation’s farmers and ranchers.

Despite these heavy regulations and strict limitations, U.S. exports of agricultural goods to Cuba grew to $457 million in 2010 from $4 million in 2001, according to the USDA.

“Improving trade relations between the U.S. and Cuba will expand access to a market of 11 million consumers for U.S. agriculture,” added Stallman. “That’s good for Cuba and good for America, too. We look forward to working closely with the administration on this issue.”