Arizona Farm Bureau’s first president, Dr. James Collier Norton was a son of a prosperous Iowa cattle grower. After finishing first in his class of veterinary medicine, he stayed on as an assistant professor until he moved to Phoenix, opened his practice here. That same year, he married his Iowa sweetheart -- Miss Clara Tufts.

His first office was at 144 W. Washington and he kept his horse and buggy across the street. When he received his appointment as a territorial veterinarian in May 1893, they provided 10 cents a mile travel expense for the new official. 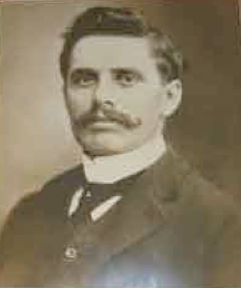 Before he retired from this position, he was credited with eradicating the cattle tick in the state. In 1904 he was named national president of the United States Livestock Sanitary Association.

When the doctor arrived in the town, he was dismayed to find that there was no Young Men's Christian Association. Through his efforts, the first meetings were held in a rented storeroom. The late William B. Christy, a civil war colonel, was the first president. Finally, in 1904, a board was elected, and Dr. Norton spearheaded the first YMCA building program fund drive.

His association with the First Presbyterian Church spanned nearly 60 years. For 48 he was chairman of its music committee, served as an elder, and was named a commissioner of the general assembly of the church in 1931.

In 1912, he resigned as the territorial veterinarian to establish the Norton Dairy. The spacious home was built shortly after for his wife, sons James, Oakley and the late Victor, and his late daughter Marietta.

Mrs. W. W. Pickrell recalls living with the Norton family during 1916 and 1917 when she and Marietta attended college in Tempe. In those days, the two younger boys helped with the dairy and the oldest was a student at Occidental College in Los Angeles.

Norton’s leadership service to Arizona Farm Bureau was quite brief. He services as president for less than a year.

Editor’s Note: Excerpted from an article in The Arizona Republic, Phoenix, July 30, 1961. As we celebrate Arizona Farm Bureau’s 100 years, we will continue to feature some excepted stories from our history book, “A Century of Progress, 1921-2021.”