Jim Klinker: “Senator Jack Brown was a rural statesman,” explains Arizona Farm Bureau Chief Administrative Officer Jim Klinker. “One of his early leadership roles was president of the Apache County Farm Bureau and he also served on the AZFB Board of Directors. He would bridge the Democrat/Republican divide when bipartisan support was needed to address . He did that both when Democrats were in control and when Republicans had control of the legislature. He had country common sense. He came out of the same mold as Stan Turley, Marty and Jake Flake.”

Editor’s Note: The following article was originally written for Arizona Farm Bureau’s Arizona Agriculture and Appeared in the April 2012 issue to celebrate Arizona’s 100 years of statehood and its agriculture history. Arizona Farm Bureau profiled Jack Brown and his leadership.

A beloved leadership quote admonishes we “Do not follow where the path may lead. Go instead where there is no path and leave a trail.”

The kind of trailblazing that Jack Brown has accomplished is something many aspire to but few achieve. So, maybe we follow his model.

A fourth-generation Arizonan, Brown grew up on his father’s ranch. He is of Mormon pioneers sent to settle northern Arizona. The family has been farming in Arizona since the late 1800s. 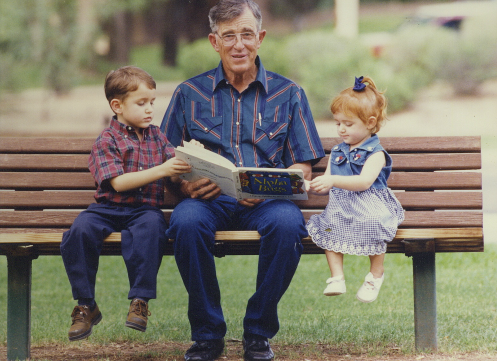 Jack Brown kept leaders growing. It can begin by reading to the younger generation, but Brown's life example should keep leaders growing since his legacy continues with his family.

“Some of the church leaders decided on where to put the towns of St. Johns and Snowflake,” Jack remembers. “St. Johns was a big piece of ground that was right on the [Little] Colorado River in the valley. The area looked good to the settlers so they made a deal to trade cattle for the right to the land.

“My grandparents were teenagers,” Brown continues. “They got acquainted in the town of Brigham City down by Winslow. Both families stayed there just a few short years and then spread out and moved around to different places. Then my two families joined up again by moving to St. Johns.”

Once married, the young couple made St. Johns their lifelong home.

In his childhood years, Brown milked the cows and helped his father with the farm, ranch and slaughter operation that the family owned. For many years, his father’s family provided the beef for the grocery stores in St. Johns.

Brown even tried beekeeping. His grandfather got him started. The family had a small business selling honey as far away as Snowflake, Winslow and Joseph City. Highlighting the challenges of farming, when an infestation of loco weed in the area led government inspectors to destroy his hives, it effectively closed the operation down.

Jack loved to be known for his farming and gardening practices just as much as his ranching. “We just had a little place but big gardens that annually raised lots of produce,” said Brown during a 2012 interview.

Like so many families back then, their start was simple. “We just had a little place but big gardens that annually raised lots of produce,” says Brown. “As time went by we got heavier and heavier into the farming.”

Before long, the young man was ready for higher learning. Brown went on to study Agriculture and Economics at Brigham Young University (BYU) receiving his Bachelor of Science degree in 1954.

Midway through he took time out for his Mormon mission to Brazil. Not surprisingly, his observations of farming in that country allowed Brown to make some major decisions. “I was sent way down on the southern part of Brazil and it was just like being isolated from the whole world. Plenty of time to think. It was then I decided I was going to farm,” he says. “I learned from family, friends and my experiences on the mission.”

While at BYU, Brown met Anna Vee Smithson from Phoenix, fell in love and the two were married. Seven children were born to the couple before Anna Vee died of cancer. A couple of years later Brown met and married Beverly Van Camp and welcomed her daughter into the Brown family.

With a growing family and a busy farm life, Brown also helped other family members with their agricultural operations in Scottsdale, and Tacna. Possibly known more for ranching, he and his family raised watermelons, alfalfa, citrus and other crops. When Brown’s Dad passed away in 1961 he took over the Apache County operations and expanded until they were running 900 head of cattle. The family continued to expand the ranch until it became a combination of deeded land, state grazing land, and Forest Service grazing permits.

A common thread emerges when you talk to farmers and ranchers. Like others in the agriculture industry, Brown began with a good base to start, getting involved with family and friends. Plus, he was close with his Dad whose other career was as a postmaster. Brown felt his dad had great judgment in business dealings and made application of those same traits. 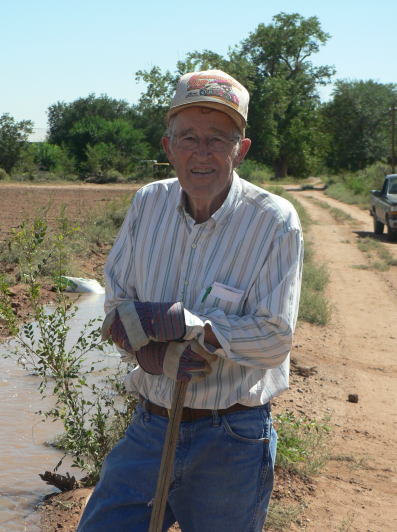 Crediting Farm Bureau with his first foray into elected office, Brown started the Apache County Farm Bureau and served on the state board the same year he ran for a state legislative office, in 1962. Some of Brown’s fellow legislators have had similar beginnings with a county Farm Bureau: Senators Stan Turley, Jamie and Jake Flake; Representatives Jim Cooper, Kel Fox and Frank McElhaney. All have received Farm Bureau’s Distinguished Service to Agriculture recognition.

Those in leadership and in agriculture know the two seem to go hand in hand despite the fact that agriculture leaders serving in Arizona’s legislature are becoming as rare as the American farmer and rancher.

Though reluctantly, Brown ran for office and won a seat in the House of Representatives. In fact, Brown became known as Arizona’s “cowboy legislator.” Initially, that legislative service that began in 1963 ended in 1974 with rural districts losing representation because of one man, one vote.

Running for a state office was never one of Brown’s priorities, according to family stories. However, several in his district had other ideas and convinced him that it was time for new blood. “I never did understand why I was the guy,” he says. “I stayed there for 12 years. Then I went home and stayed for 12 years. I went back to the legislature and stayed until 2010 for a total of 36 years of service.”

Additionally, he was a member of the National Conference of State Legislatures’ (NCSL) Legislative Management Committee and the Water Policy Committee of the Western Legislative Conference of the Council of State Governments. Brown took an active interest in agricultural issues such as the agricultural tax exemption, open range grazing, protection of rural water interests and maintaining brand inspections.

In 2008 the Arizona Republic named him to their prestigious list of Modern Arizona Legislature’s Shining Stars. They said, “Brown has institutional knowledge of issues and agencies…often elected to leadership as one who can bridge coalitions and partisan differences.”

During his 36-year tenure as a legislator, Brown was always a proponent of private property rights. He also did everything to be sure water rights and water access protected. Brown knew how important these issues were (and still are). He was proud to represent rural Arizonans and their lifestyles and many contributions.

The go-to guy for farming and ranching interests in the state legislature, Brown has always been a strong advocate for rural Arizona. “We must make rural Arizona strong or the big cities will suffer because I honestly believe rural people have more common sense, partly because anyone in rural America is forced to get a focus on the big picture. We have to make sure things work out; to make sure things work better for everyone.”

Says his oldest son, David, “We can attest to the influence our father has had in preserving farming and ranching as a way of life in Arizona.” Sons David and Doug, two of the four lawyer children that practiced law together for many years, have represented farming and ranching interests throughout the rural part of the state.

Brown, a Democrat, worked with legislators on both sides of the aisle. “I always worked well with both Republicans and Democrats,” he said. “I realized early on that you’ve got to work with both sides if you’re going to accomplish anything.”

If someone put a label his leadership skills, they’d identify diplomacy and negotiation, the ability to work with both sides. “To that’s what bipartisanship really means,” says Brown. He suggests it may be a lost art as “more and more it’s harder and harder to get both sides to work together.”

He believes some things about farm life translate well into leadership. “True leadership is exemplified by a strong work ethic and a willingness to serve,” he says.

He’d like to see modern-day politicians stop having so many unwritten agendas. “Quit worrying about your next votes,” he says.

And, when it’s time to quit, quit. “In later years, I realized I couldn’t remember things as well as I used to, so I told myself it was time to get out. I didn’t want to run and not be effective.”

And, Brown has a great appreciation for Arizona Farm Bureau because the organization works well with its volunteers, he suggests. “The organization has always treated me fair and square,” says Brown. “I love the Farm Bureau. They do the best job of representing agriculture overall.”

He has set the bar high to keep leaders growing; certainly for other leaders following in his footsteps. But, the high bar applies to his family too. All eight children are college graduates with four lawyers including one currently serving as an Arizona Appellate Court judge. Brown has 36 grandchildren and 13 great grandchildren.

He’s proud of his family and now bequests to his children and his children’s children his love of good hard, honest work. And, yes, there is still much to do with a new crop of great-grandchildren coming along that will be in need of his kind of leadership legacy. He’s up to the task.

Can we appropriate Brown’s leadership qualities in our own lives to blaze trails? Certainly. And a few key components that seem to have worked so well for can work for us too: Work hard, be willing to serve and recognize that to accomplish something you’ve got to get along.