The explosion of ACP populations in 2016 is not unique to Arizona, but rather well documented across the citrus producing states.

A federal quarantine will be imposed sometime in the future, according to the Arizona Department of Agriculture.  The director's action allows for the movement of citrus fruits and plants within the State of Arizona without restriction. Interstate regulations on the movement of citrus fruit and nursery stock, where applicable, are still in effect.

“The continued, cooperative effort between federal, state, industry and university partners, as well as the public and various municipalities, has gone a long way in delaying the implementation of this quarantine since the introduction of ACP in Arizona in late 2009,” explained G. John Caravetta, associate director the Arizona Department of Agriculture.

Disease detection is now the primary focus in Arizona with the statewide psyllid quarantine now that the disease has just recently been discovered in Ensenada, Mexico some 80 miles south of the California border.

“I see the statewide quarantine as a protective measure; something we need to do. Now, we have to be focused on the disease, not just the bug at this point,” said Mark Loghry Yuma County Farm Bureau President and co-owner of Sunset Nursery, a citrus nursery in Yuma. “The genetic development of an improved plant that’s in the works to combat the disease is our highest hope out there.” 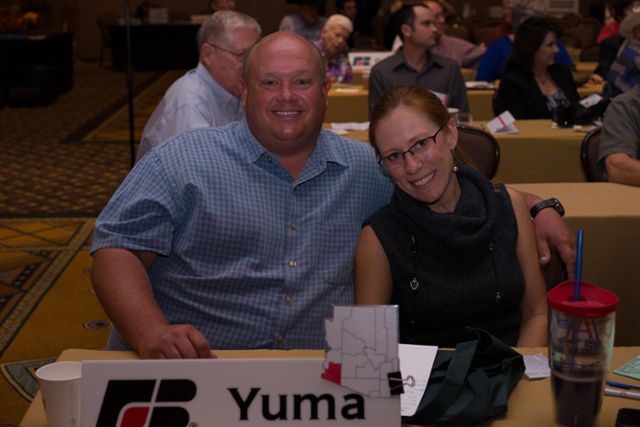 Long engaged and familiar with the situation taking place with the Asian Citrus Psyllid and citrus greening disease, Yuma citrus growers Mark and Stacey Loghry of Sunset Nursery are advocating for a focus now on improving the citrus plant to combat the disease. Active members of Yuma County Farm Bureau, the Loghry's know first-hand the importance of ongoing research efforts.

Loghry is referring to the collaborative effort taking place with experts from around the world in the scientific areas of citrus pests, diseases and breeding to fight the disease. Just this week, the University of California at Riverside hosted a launch ceremony for a biosafety-level 3 plant facility where research will take place to combat citrus greening.