The Antiquities Act Once Again Exploited to Ambush Your Rights &amp; Your Resources

Editor’s Note: The following is Coconino County Farm Bureau President Jim Parks’ Testimony during a Congressional field hearing hosted by U.S. Congressman Paul A. Gosar regarding abuse of the 1906 Antiquities Act by presidential proclamations. Specifically, the hearing was an stop the designation of 1.7 million acres in the Grand Canyon Watershed as a Monument and reflected the enormous opposition to the proposed designation. Hosted in Kingman, the hearing  Monday. During testimony, Gosar’s team taped the hearing that can be heard on the Congressional Leader’s Facebook page. 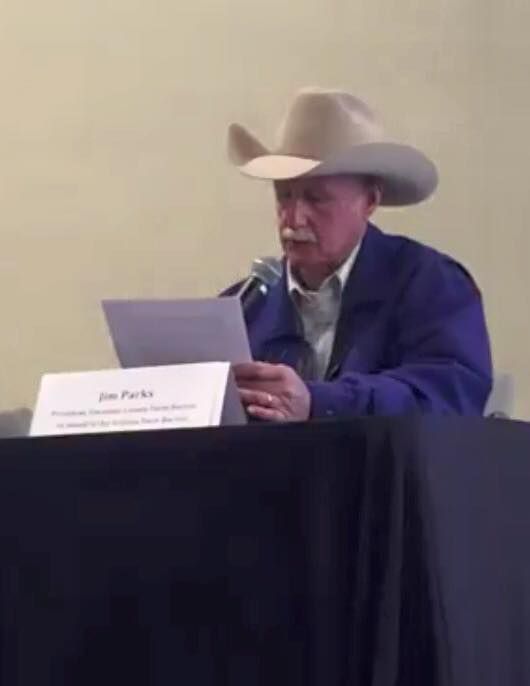 Arizona has more national parks and monuments than any other state in the nation.

“Almost 70% of all land in Arizona is under the control of the federal government, leaving less than 20% of Arizona’s land in private hands. land is the foundation of our state’s economic engine,” states the Arizona Chamber Foundation.

The proposed Grand Canyon Watershed National Monument is one of the latest in a long line of abuses of the 1906 Antiquities Act by presidential proclamation. At 1.7 million acres, an area larger than the state of Delaware, the proposed monument would have far reaching negative economic and social impact on people in the states of Arizona, Utah, Nevada, and beyond. A quote from the Cedar City News near the Arizona Strip sums up the economic and social disaster that a national monument can bring to local folks: “Garfield County- Since the birth of Grand Staircase –Escalante National Monument in 1996, city and county officials say they have seen such a severe decline in industry that it has led to an increased loss of both revenue and residents. This has caused school enrollments to fall so low districtwide that they are now considering filing .”

Within the boundaries of the proposed Grand Canyon Watershed National Monument are over 64,000 acres of Arizona State Trust lands and almost 28,000 acres of private land. This alone violates federal and state laws, as it amounts to a “taking” of these state and private lands. The violation of our 1910 Arizona Enabling Act, a contract between the United States and the Territory of Arizona, which enabled Arizona to become a state in 1912, ensures the sale and management of State Trust Lands to benefit the schools of Arizona. The sale of these state trust lands will be negatively impacted by access to those lands, making them unsalable and therefore useless as a generator of school funding for the benefit of Arizona’s schools and children.

As a “taking,” all monuments conflict with the Fifth Amendment of the Constitution of the United States, that requires the government to compensate citizens when it takes property for public use.

This holds true for state and private lands held within the proposed monument.

When the Grand Canyon-Parashaunt Monument was declared in 1996, there were thousands of acres of private land and state trust lands within its boundaries. One family which owned 12 square miles of private ranch land within the boundary was denied access by Bureau of Land Management by road closures, making it practically impossible for them to continue their ranching operations and forced them to sell out to the BLM and move elsewhere.

This proposed monument also violates the Multiple-Use Sustained-Yield Act of 1960 and the Federal Land and Policy Management Act of 1976 which both legally prohibit the federal land management agencies from affecting the state’s jurisdiction and responsibilities. In addition, there has been no NEPA study done on the lands within the proposed monument.

It can be argued that the Antiquities Act is unconstitutional because it grants the Executive Branch of the United States with the power to seize land, which is not granted anywhere within the Constitution. In fact, Article 4, Section 3 suggests that congress only has the power to dispose of land, not to acquire.

Section 2 of the 1906 Antiquities Act states “the President of the United States is authorized …to declare by public proclamation historic landmarks, historic and prehistoric structures, and other objects of historic or scientific interest … the limits of which in all cases shall be confined to the smallest area compatible with proper care and management of the objects to be protected….”.  At 1.7 million acres, this proposed monument, the proposed Sedona Red Rocks National Monument, and almost all other National Monuments proposed or proclaimed within the last 80 years have gone completely against the original intent of the Antiquities Act itself.

Because the Presidents, from both parties, who proclaimed these national monuments, cannot be trusted to even follow the original law intended to govern the process of proclaiming a national monument, the Antiquities Act needs to be overhauled and the privilege of monument designation be changed, and reserved to the People and the United States Congress, NOT the Executive Branch of Government alone.