The Elephant in the Room Eats Organic and Conventional

By Julie Murphree, Arizona Farm Bureau Communication Director: My job sends me all over and interfacing with a wide variety of interesting people including amazingly talented chefs, profoundly innovative farmers and ranchers surrounded by a captivated and adoring public. A recent “Foodie event” was no exception. And, one encounter left me even more convinced that my organic and conventional farmers and ranchers need to have a “Come to Jesus” meeting of the minds.

During the "foodie" event seated among Arizona’s amazing farmers and ranchers and guests, I had the privilege of meeting some new and energetic people in agriculture. To protect the innocent … and guilty … I won’t name names. But let’s just say when I to one of the organic farmers his first reaction to discovering that I worked for the Farm Bureau was to say we didn’t represent him and his farming cohorts.

We have an elephant in the it's time to take notice. Arizona Farm Bureau often uses this photo to remind our farmers and ranchers to put "Slow Moving Vehicle" safety signs on their equipment.  This photo might be even more appropriate for this issue considering how slow we are to move on certain issues.

Having not yet learned the fine art of just keeping quiet at times (slow learner), I said, “Oh, not true. We have a significant number of small and large organic growers in our membership.”

And, maybe that was all I needed to say … but I just kept going into uncharted territory (okay, so I’m proud of what Farm Bureau does and can do for our farmers and ranchers regardless of size and method of farming). “The problem is that most of our member farmers and ranchers don’t participate in our Farm Bureau leadership opportunities and advocacy (lobbying) activities,” I added. (And, this lack of participation is from both organic and conventional.) 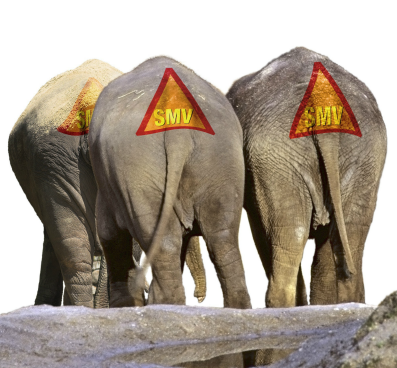 My organic farmer mumbled a few more things I really couldn’t hear over the music and showed his continuing for my point which caused me to then say, “The world is run by those who show up.”

Admitting now that I may not have shown the most grace, at that moment I think I triggered deep in his belly some years of stored up resentment and he replied, “I don’t have time. Unlike your farmers who dump chemicals on their crops and work part-time, my 16 and 17-hour days don’t allow me to come to meetings.”

And, in that same moment he triggered something deep in my belly and with even less grace I said, “Well, I love you too.”

He was basically telling me my dad and mom and all conventional farmers were lazy, didn’t have to work as hard and indiscriminately poured chemicals on their crops. Such a person as my organic farmer friend describes just doth not exist.

Melding metaphors, you’ve heard that to eat an elephant you must begin one bite at a time. You’ve also heard that the “Elephant in the room” is an English metaphorical idiom for an obvious truth that is either being ignored or going unaddressed.

For us in agriculture, we must begin to eat that elephant and quit ignoring it from now on. I mean the elephant that creeps (or more appropriately stomps) around in agriculture circles that organic and conventional farmers and ranchers from uniting in the higher call of our industry: Which is to preserve and stake out the value of all types of agriculture and dispel the misconceptions we possess about each other.

And while elephant meat might not be the tastiest, it’s time to feast on it with a gathering of all kinds where we hash out the misconceptions and understand all farming and ranching matters and is good. This is serious; farm incomes for agriculture businesses across the country might experience as much as a 30% to 40% decline right now, according to the USDA.

I’m often accused of being too nice. So, I ask my colleagues, would you rather have had me stand up, tell my adversary to “Bug Off” and stomp out?” Unfortunately, this solves nothing; in the a disconnect continues to fester. Instead, we need to bridge the divide.

A quick solution (but not the only one) to some of this misinformation about conventional agriculture in the organic movement is to consider hosting a series of forums where we invite panels of organic, conventional and natural method farmers to exchange insights and ideas about working together and collaborating. For several years now, I’ve proposed a panel at Arizona Farm Bureau's Annual Meeting.

True, this "Meet-up" will never work if the only way to market organics is to denigrate conventional or vise .

Ultimately, and perhaps the simplest way to overcome differences is to participate. It’s still true that the world is run by those who show up, I'll just try to speak this truth with more grace.

Later that evening, somewhere I found the courage to approach my newly-met organic farmer and I reached out to him saying, “Truce?” We gave each other a cordial hug.