The Man from Gila River

By Julie Murphree, Arizona Farm Bureau: The Gila River. He’s traversed her banks time and time again from confluence to confluence. He’s observed her winding and curving flows, offering the gift of water to anyone willing to farm a dry and thirsty land. He remembers her calm waters and her raging torrents. Wilber Lunt knows the Gila River. 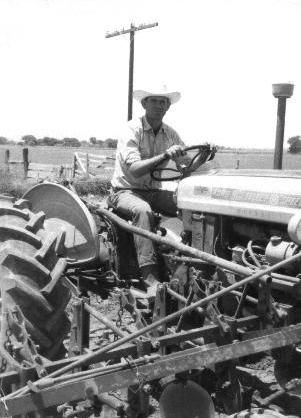 Wilbur Lunt and other young farmers during that period saw their family farms transition from the horse and plow to more mechanized farming thanks to the tractor’s introduction.

Farming in Arizona since 1917, the Lunt family like others seemed drawn to the Gila River. And while the family has a long farming history Wilbur is the last of his generation to be living on the original family homestead in Duncan, beside the Gila River. Born in 1929, he has farmed all his life, partnering with his father and brother on the farm since 1950 and eventually farming half the Duncan Valley with grains, and lettuce as well as raising hogs and cattle. In 1964, he purchased the remaining part of the farm from his father.

Outside of two years working for the Phelps Dodge mining company as an operator and eventually repairman in the “Powerhouse,” his real focus has been farming.

And, so much of who Wilbur Lunt is has been shaped by an ancient River flowing through a desert.

The largest tributary to the Colorado River, the Gila River’s natural flow is 650 miles from New Mexico into Arizona and eventually into the Colorado at Yuma, Arizona.

While the River’s history is as long and winding as the River itself, The Arizona Water Settlements Act of 2004 represents one of the most controversial and challenging events of the Gila River. The Settlement was initially designed to resolve a number of difficult issues involving the Gila River Indian Community and the Tohono O’odham Nations in addition to farmers along the banks of the River. Disputes between the tribes and non-Indian water users over claims to water in the Gila River system had gone on largely unresolved for more than 100 years. Unfortunately, the Settlement has not really settled anything (see the April 2011 issue of Arizona Agriculture).

And while disputes continue, Wilbur Lunt tirelessly works toward securing farming’s future along the banks of the Gila River.

Speaking affectionately, as if talking about a family member, Lunt says, “The River is such a part of our lives. I have been up and down that River from beginning to end. The River is very dear to me.”

He knows the River so well, engineers have consulted with him. After some of the most dramatic flooding in recent history during the 1970s and at a time when the government provided flood-control dollars, Lunt worked closely with engineers to help them design better diversion dams. “It’s not a question if the Gila will flood, but when.”

Often, Lunt will begin giving an oral history of Greenlee County farming and the River. “The River has changed so much over just the last 50 to 100 years,” he says. “But this is natural because 100 years before me, the River changed a lot. The people currently in charge don’t have focus on the River. They’ve lost sight of the big issues.”

His Passion is Agriculture

Growing up, Lunt idolized his father. “I was by his elbow wherever he went,” explains Lunt. Watching his father and older brothers work the farm became the catalyst for Lunt to follow an agriculture path.

In fact, Lunt was witness to a tremendous technology transition in agriculture. Lunt’s early years on the farm involved using real, four-legged horse power. “People typically recall incidents of life either by the first car they bought or the houses they lived in,” says Lunt. “While one of the first houses I remember growing up in was an adobe house, I mark my very early years by remembering a wagon I fell off of and that ran over me; or when I was thrown from a horse. That’s how I remember those early years including the houses we lived in.”

While he was only five or six when the first tractor appeared on the farm, Lunt confesses his dad used to harass them as they transitioned more of the farm work to the modern-day equipment. “Dad challenged our work efforts,” he says. “He’d say ‘Are you too lazy to do the work?’ But later we’d hear him bragging to his friends about our work on the farm.”

Lunt’s major chore on the farm was milking the cows. “The gardening, milk, eggs and butter were our cash flow where the larger farming went to pay the mortgage on the farm.”

Growing up, Lunt also built wagons for horses. He was regularly trying new things on the farm.

Later, he served in the Army during the Korean War and was stationed in Alaska as a mechanic and welder. He ended up head welder because the previous welder shot himself in the leg to get out of the war.

At conflict’s end, he returned to what he loved, his River and farming.

His Life Skills Include Being Involved and Engaged

Lunt was instrumental in bringing Farm Bureau to Greenlee County in the and has been a member ever since and currently serves on the Greenlee County Farm Bureau Board. In addition to Farm Bureau, Lunt has been active with many organizations in support of Arizona agriculture.  He helped form the first soil conservation district in and served for 17 years as president of ASCS, which is now the FSA.

He began the volunteer service involvement with the Boy Scouts in the 1950s which helped start much of his involvement in community activities.

Plus, he has served as president of the Franklin Irrigation District since 1959, serving as a key leader representing agriculture’s interests in the Gila River Water Settlement. He also served on the fair commission. He was on the local school board for several years in the 1970s.

Lunt has worked tirelessly on the Gila Valley Water Settlement since the beginning. He attends almost every federal court hearing in Phoenix in support of the farmers and ranchers and the irrigation district.

According to Neil Montierth, of the Gila Valley Irrigation District, “Wilbur has more energy than the Energizer Bunny and is tireless in protecting the water rights of the farmers on the Gila River. If he ever quits we will lose a key player in the fight for water rights in Southeast Arizona and Western New Mexico.”

At water meetings when there is nothing to do but wait, Wilbur keeps the group entertained for hours with stories of family, his time in the Army, community members and even a few stories involving Sandra Day .

O’Connor was a casual acquaintance he explains, as his family farmed nearby and worked with the Day family. “But had I known how she was going to turn out I might have paid a little more attention to her. When she became famous we all paid attention.”

Arizona Farm Bureau has also paid attention to Wilbur Lunt and all that he’s achieved. Last November the organization gave him the Distinguished Service to Agriculture Award. And if you ask Lunt to reflect on his life, he’ll tell you that he’s been blessed with an “Independent, good life, good marriage, and I’m out of debt. Life’s wonderful.”

But he still has work to do on that River. “If it was up to me, the first thing I’d is dam her upstream to prevent the tremendous floods we encounter. We also need to channel the River because sediment has built up over the years.”

No, Wilbur Lunt isn’t finished with his River. In some if you visit with him, it feels as if he’s just begun.

Editor's Note: This article originally appeared in the February 2012 issue of Arizona Agriculture as part of a series celebrating Arizona's centennial and Arizona agriculture. This version of the article has been updated for Arizona Farm Bureau's "The Voice" blog.