The world needs Agriculture, ALL of it!

By Amber Morin, Arizona Farm Bureau Field Manager and Southern Arizona rancher with her parents: The choice to eat modern, organic, all natural, or locally-grown food is a decision based on a mix of fact and emotion, that when combined, help to create our individual belief systems around food. As humans, we have a natural tendency to hold tightly to our beliefs because they make us who we are. They help identify and separate us from others, which makes challenging them difficult. However, our belief systems around food are faced with a moral confrontation – world population growth and food insecurity. And, this includes the food insecurity we’re dealing with here in America. 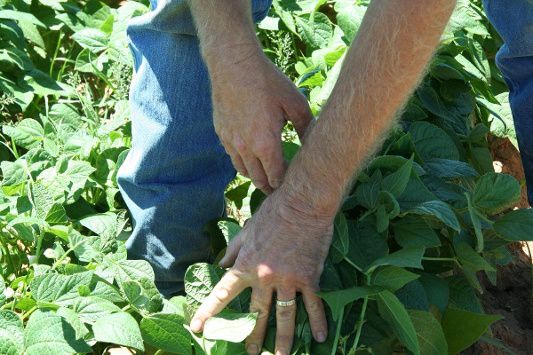 Farm Bureau celebrates all agriculture. Small and large, organic, conventional, natural and more. It's all needed; it's all good.

Population experts anticipate the addition of roughly 3 billion people to the planet by the middle of this century, according to the United Nations– Department of Social and Economic Affairs. Coupled with current facts about world food insecurity, that one in eight people, or 13.5 percent of the overall population, remains chronically undernourished, which presents us with a challenge: World Hunger. How do we feed an extra 3 billion people when, at the current population levels, people are going hungry?

Working against us, are many factors out of our control – conflict, war, political circumstances, poverty, and lack of resources. The amount of land suitable for farming is likely to decrease due to urbanization, salinization, and drought. However, as American’s there is one thing that is within our control - halting the polarization and divisiveness surrounding the agricultural industry and how we grow our food. American farmers are producing more with less. Farmers produce 262 percent more food with 2 percent fewer inputs (labor, seeds, feed, fertilizer, pesticides etc.), compared with 1950, according to the American Farm Bureau Federation. We should celebrate this!

Contributing factors to the success of American farmers biotechnology, ultra-precision farming equipment using - GPS, cameras, and soil sensors; advancements in soil health and water usage; diversification of food production i.e. community gardens and direct market farming; and education – teaching people how to grow their own food. I am sure that I am missing a few, but the fact is, one of American agriculture’s success stories is that we have advanced in a variety of production methods and are not reliant on one. We are using better technology and better education to use less, produce more, and allow for a myriad of food choices, which is a luxury.

In my opinion, there is no “right” or “wrong” way to grow crops. This is a belief. Rather, scientifically, there are more efficient and less efficient production techniques that result in variations of yield and the use of more, or less, inputs. But because as people, we hold tightly to our beliefs it is easy to think that our way is the best way. In this case, that our way to grow food must be the best way to solve the world’s hunger concerns.

However, I disagree, I think polarizing the food system is a threat to food security in this nation and the world. Here’s why.

To attempt to address the coming world population growth and its hunger concerns, which will be impacted by complex factors out of our control, requires us do make a difference in the area we can control – innovative advancements and COLLABORATIVE solutions, that are cognizant of people and the environment, which allow maximum agriculture production while using inputs. It is dismissive and dangerous to think that one food production method can address this. Now is not the time to one up each other with our beliefs because we are afraid to be wrong. Instead, it is the time to make informed purchasing decisions that mirror our personal beliefs, be grateful we have food options, and allow agriculture to advance as an industry to address the challenge that is presented to us all - hunger, on a massive scale.

In summary, do we hold so tightly to our beliefs about the “right” way to grow food that we shut out science, technology, diversification, education, and improved farming methods to do things our way? In doing so, dismissing the fact that while we are busy fighting over how to grow food, people are going without it.