Thomas Jefferson Had a lot to Say, Including About Agriculture

By Joe Sigg, Arizona Farm Bureau Government Relations Director: Thomas Jefferson had a lot to say.  In fact, if you want to quote Jefferson in any context you can probably find something he said.  Which is also to say, he was not necessarily consistent.  He said a great deal about agriculture and farmers, with his most famous quote as follows:

“Those who labor in the earth are the chosen people of if ever he had a chosen people, whose breasts he has made his peculiar deposit for substantial and genuine virtue.” 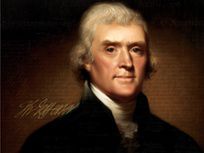 Whew…that might be a bit over the top…some wit observed it is a comment from which farming and agriculture has yet to fully recover!

And it does not make farmers and ranchers any better than say the guy manufacturing nails…something Jefferson did to try to pay his farming bills.  farmers and ranchers will accept a compliment here and there…after all they produce things…they make stuff, and it is right up there alongside air and water, which have to be manufactured.