Whether you receive surface water from CAP or groundwater from wells, the energy that it takes to lift and move water plays a significant role in the total cost of irrigation.

Given the water-power-agriculture nexus, this article provides an update on the significant changes affecting the power industry.

1.     Transformer Oil – Fracking : In the quest for more petroleum, or increase the longevity of existing wells utilizing new technology, hydraulic fracking has created a glut of natural gas.  This abundant supply has stabilized the futures pricing on a previously volatile commodity.  This increase has come at an opportune time, as environmental initiatives have continued to increase the cost of operating coal plants and expedited some plant retirements.

Transmission pipeline capabilities have not yet caught up to the increased supply, but look for more pipelines to be built in the future.  There is also increasing interest in converting natural gas as a petroleum replacement.

Fracking has also increased petroleum production, making the United States a net exporter of petroleum and helping us become more energy secure.  With the United States petroleum exports more than doubling since 2010, we may see prices inch up, but long-term price stability for electricity and gasoline look favorable.

2.     Load Shedding - Energy Efficiency : The ripple effect of the “Great Recession” didn’t spare the energy industry.  As we have slowly clawed back from the economic abyss, what used to be a pre-programmed 3% increase in demand has been relatively flat over the last 10 years.  In fact, total energy consumption was 4% less in 2016 than in 2007.  Besides the economy, new technologies (CFL/LED lighting, smart thermostats, etc.) and the increased awareness of sustainability has helped lead to this reduction.  The power producers are grappling with reduced revenue and are trying to rationalize investments in new generation facilities.

3.                 Generation : While aggressive environmental regulations and tax incentives have spurred the development of wind and solar projects and driven up the costs of coal plants, the abundance of natural gas has had more impact on power generation changes than anything legislation has done.

While coal used to be 50+% of the total energy generation in the United States, it has dropped to barely over 30%.  In 2016, natural gas accounted for almost 34% of total energy production.  While natural gas pricing has crept up in 2017, long term prices continue to look favorable.  It looks as if King Coal may be dethroned.

4.                 Invertors – Renewable Energy, Duck Curve : The electrical industry is not immune to the law of unintended consequences.  The push for clean(er) energy and carbon reduction has led to increased solar and wind generation, but with these new sources comes new problems.

Renewables are intermittent, which means they only generate when the sun shines or the wind blows.  This translates to roughly 50% of the time for solar and 18% for wind.  People tend to want/need power 100% of the time.  Utilities run baseload plants to provide energy in an attempt to cover the 24-hour demand.

Balancing Areas (local or regional power territories) typically operated with 15% spinning reserves.  They use generators that can go live to support increased load or unplanned outages.  Unfortunately, renewables have increased the need for spinning reserves due to their uncertainty.  This means that there is excess energy on the grid during the day, and there is a dramatic decrease in supply just as the sun goes down and the demand ramps up.  This has been coined the Duck Curve, which is due to the shape of the load duration curve during a typical day.  The biggest hurdle facing the CAISO is this drop of generation as the demand increases.  Estimates are that the shift is 13K MW or more of capacity over 3 hours.

Arizona has benefitted from this recently because companies have been selling negatively priced energy to help balance the grid.  Due to Investor Tax Credits, the solar companies can still make a profit, even at this price point, due to the subsidies these companies receive.  Arizona has been home to a lot of this energy recently, but as new technologies get developed, we may lose this benefit.

5.     Regulation Rollback : President Trump, having years of experience with government regulations, appears to have a profound distaste for them.  He has found a willing participant in rolling back regulations in the EPA’s Scott Pruitt.  They seem to be undoing or replacing a majority of the environmental regulations that the Obama administration pushed through.  This will help reduce or avoid the increased costs that accompanies regulation compliance.

One former EPA chief estimates that it may take 20 to 30 years to regain the “advances” that the Obama administration put through.  To me, it sounds like a good start.

6.     Taxes : With the decrease in corporate taxes in 2018, multiple Public Utility Commissions have already taken action on Investor Owned Utilities regarding recent or pending rate increases.  Some have reversed previous rulings and reduced or eliminated previous rate hikes.  No news yet on what the Arizona Corporation Commission will do to the recent Arizona Public Service rate adjustment from August of 2017.

7.     Regulation, Ramping and Reserves (3R’s) : Regulation, ramping and reserves are the 3R’s that help maintain the grid at a frequency of 60 hertz, match supply with demand, and make sure there is enough in reserves in case of an outage or dramatic spike in demand.  With the evolving generation sources (renewables), the electric industry is looking for ways to maintain grid stability with intermittent resources.

8.     Markets : As renewables have changed the way the grid is operated for practical or financial reasons, multiple concerns have been raised over baseload plants (coal and nuclear).  To combat the compounding effect of reserves, Independent System Operators and Regional Transmission Organizations (“markets”) have been developed to leverage economies of scale and reduce the need for individual plant reserves. 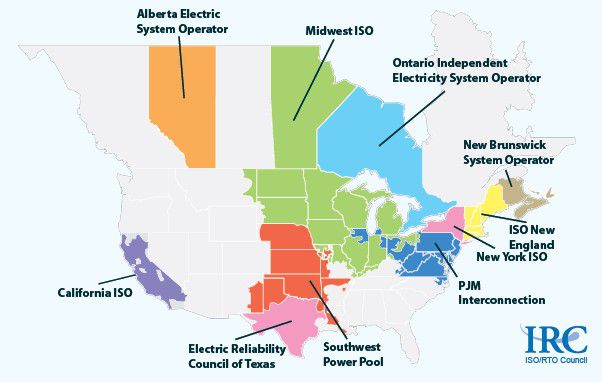 With these increased levels of administration, there has been a correlating increase in power costs.  Arizona is not in an ISO/RTO and has maintained a cheaper rate than its neighbors who have an ISO/RTO.  However, multiple people feel that it is inevitable that Arizona will eventually be pulled into a “market” in the near future.

9.     Transmission : As markets continue to expand nationally and creep into Arizona, generation capacity will shrink and transmission will be more utilized and may become congested.  At a recent American Public Power Association conference, one of the speakers anticipates that transmission costs will increase 9%-10% year over year.

10. Battery – Storage : The panacea for the electric industry is energy storage.  This comes in a multitude of forms (pump storage, compressed gas, molten salt, etc.), but the majority of the focus is based on lithium-ion batteries.  Tesla has been working on a home battery pack in addition to their focus on electric vehicles.

Electric vehicles can serve as the sync for the grid, absorbing excess energy when available and providing peaking energy if necessary.  Coupled with smart technology and residential or commercial scale batteries, energy storage would transform our industry.

While storing energy will solve a multitude of issues, it will also create questions, like what will the energy rate(s) be in the future?  It may change the industry pricing model to something similar to your phone’s data plan.  It may drastically reduce the expansion of new generation or help homeowners cut the power cord like their cable.  Thanks to technology, with new solutions comes new problems, and vice-versa.