U of A Professor Helping Make Science Exciting Again

As drones increase in popularity and self-driving cars become a common reality, the changes we’ve experienced over the past 50 years will pale in comparison to what our youth will witness in the next 50. 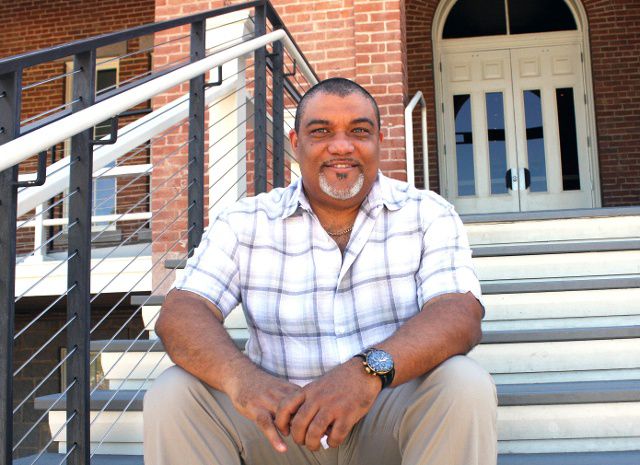 Professor and Director of the School of Animal and Comparative Biomedical Sciences at the University of Arizona, Dr. Andre-Denis Wright suggests that both animal and crop agriculture “have great promise for advancement.”

Prior to the University of he was a Research Group Leader at the Australian Government's Commonwealth Scientific and Industrial Research Organization (CSIRO). Dr. Wright's internationally recognized research uses cutting-edge molecular techniques, such as pyrosequencing and metagenomics to examine the microbiome of the gastrointestinal tract to better understand the interactions between host genetics, immune responses, and the gut microbiota, which are largely unexplored.

As a result, Dr. Wright has been developing strategies to increase the efficiency of nutrient utilization in livestock and to raise the level of production of food in an ecologically sustainable way (i.e., decrease enteric methane). Several years ago, his research interests expanded to also include human gut microbiology.

Dr. Wright received his Ph.D. from the University of Guelph in and has published over 102 peer-reviewed papers, 18 book chapters, and 98 conference papers. He serves on the Editorial Boards for 5 journals and in 2008, he had a ciliated protozoan named after him, Apokeronopsis , in recognition of his contributions to microbiology.

Knowing he wanted to be a scientist and astronaut as a young boy, Dr. Wright was inspired to pursue biology as a result of a medical incident his mother struggled with. His love of science continued to grow as inspiring mentors and additional life experiences kept driving him to the academic specialties he has developed to date.

Arizona Agriculture: What inspired your interest in science?

Dr. Wright: I was 4 years old when Neil Armstrong walked on the moon and I remember listening to this historic broadcast on the radio with my mother. That same year, I started watching the original series of Star Trek (on our black and white TV), and when I was 10, I watched another show called Space 1999. I was 12 when the first Star Wars movie came out in 1977 and I already knew I wanted to study science and be an astronaut. As time went on, I took all science courses in high school and performed well in physics, math, and biology.

When I was 16, I joined the Royal Canadian Air Cadets and spent many hours flying in gliders, single engine and helicopters. After High School, I joined the Cadet Instructor’s List and got my commission as an officer in the Canadian Air Force. At that same time, I was also a freshman at Saint Mary’s University (SMU) (in my hometown, Halifax, Nova Scotia), majoring in mathematics.

However, at the end of my sophomore year, my mother suffered a serious back accident and required surgery with a risk of never walking again. The surgery was somewhat successful and she was able to walk again. After months of consultations with the doctors, I realized that I loved biology and that my passion was helping people to lead healthy lives. So, at the start of my junior year, I switched my major to biology and my new focus was to go to Medical School. I had an amazing mentor at SMU, Dr. David Cone, who got me involved as an undergraduate researcher in his lab. I discovered that I loved doing research and finding the answers to unanswered questions.

After I graduated with my BS in Biology, I wanted to pursue graduate studies at the University of Guelph (45 min west of Toronto). So, I also retired as a Captain from the Air Force and moved 1,150 miles to Guelph, Ontario to attend one of the top Agricultural Universities in Canada. I did my MS degree with Dr. Denis Lynn on the rates of evolution in parasites and their free-living relatives (I now teach the “Biology of Parasites” at U of A). I published my first paper in 1995 and seeing my name in print for the first time was a career changing experience. After earning my MS, I worked at the Ontario Veterinary College for a year before starting my with my former MS advisor. Dr. Lynn was an amazing advisor and mentor. He has had a huge influence on my success as a scientist and my development as a teacher, advisor, and mentor.

After graduating in 1998, with my on the gut microorganisms of cattle, sheep, and kangaroos, I went off to do my post-doctoral fellowship at Australia’s Commonwealth Scientific and Industrial Research Organization (CSIRO) in Perth, Western Australia. There, I worked on developing DNA markers to identify changes in the rumen of sheep and cattle to evaluate the efficacy of a range of different vaccine formulations, formulated to reduce methane emissions from livestock.

In 2000, I became a Project Leader and was made a permanent research scientist with the Australian Government. A few months later, I also learned that my mother had stage 4 colorectal cancer. Sadly, she lost her battle with cancer 11 months later ( 2001). After my mom’s passing, I returned to Australia with a new resolve to develop a better diagnostic tool. Because I was using DNA markers to identify changes in the microbial community in the rumen of cattle and sheep, I started developing similar methods to identify microbial changes in the human colon during the onset of colorectal cancer, Crohn’s disease, and diverticulosis. The rest is history. My research interests here at the U of A still include making livestock animals more efficient and environmentally sustainable, and to identify biomarkers for the early detection and diagnosis of colonic diseases.

Arizona Agriculture: Tell our readers about your research and development of a breath test that detects colon cancer.

Dr. Wright: Methane producing microorganisms, called methanogens, are implicated in pathogenic gastrointestinal disorders in humans including colorectal cancer, inflammatory bowel disease, irritable bowel syndrome, obesity, and anorexia. Measurement of the concentration of methane in human breath has been considered to be an accurate surrogate for the presence of bacteria-like methanogens in the colon. My research uses DNA from human stool samples and corresponding breath samples from the same individuals to determine relationships between the numbers of these bacteria-like methanogens and the concentration of methane in human breath. Simply stated, these the bacteria-like methanogens produce methane gas in the colon, which is absorbed by the circulatory system and carried to the lungs, where the methane gas is released during exhaling.

Arizona Agriculture: You mentioned that you’re truly excited for your daughter as we now live in the most exciting time for students of science. Explain?

Dr. Wright: My daughter is in grade 5 and she is building robots and programming them to do specific and is already using a 3-D printer to make items. She is doing things as a 10-year old that I have not yet experienced. As I previously mentioned, when I was my daughter’s age, I would gaze in awe when Captain Kirk and Mr. Spock would use their communicators and replicators and other futuristic gadgets. Now, most of these items from the TV future are a reality with the use of smartphones, tablets, and 3-D printers.

As drones are increasing in popularity and self-driving cars are becoming available, the changes that I have experience over the past 45 years will pale in comparison to what my daughter will witness over the next 45 years. She can’t wait to have a transporter and to travel at the speed of light.

Arizona Agriculture: What areas in agriculture, whether crop or animal, will be or currently show the most promise for even further advancement?

Dr. Wright:  Both areas of agriculture have great promise for advancement. This is increasingly important as we need to move towards doubling food production, using existing land, to feed 9 to 10 billion people by 2050.

Arizona Agriculture: How can we get more young people excited about science?

Dr. Wright:  We can get more young people excited about science by exposing them to activities that are fun and exciting. Most do not realize that they already use science and scientific advancements daily in their regular routines. My daughter and her classmates are learning and using science every day. Science is not meant to be scary. The School of Animal and Comparative Biomedical Sciences at UA has a STEM extension specialist, Dr. Jerry Lopez, who is engaging with 4-H groups around the state and putting on workshops and camps to get students involved in hands-on learning in different STEM areas. We hope this hands-on exposure to science will help excite and motivate students to consider careers in STEM fields.

Arizona Agriculture: How should young people prepare for a career in the hard sciences?

Dr. Wright:  Those with a passion for science should continue that passion with active learning. Young people should be inquisitive, ask questions, read books and articles, and participate in experiential learning. Their parents, or caregivers, should encourage and support them, and their teachers should recognize students who are eager to learn and give them appropriate challenges that will increase their understanding and fuel their curiosity, but not drive them science.

Arizona Agriculture: Recently a well-educated friend of mine said, “Agriculture has become too science-based.” She’s fully bought into the American Gothic idea of farming. How can we change the perception that science is bad for agriculture?

Dr. Wright:  We need to do a better job to educate the public that without science, there would not be enough food or plant and animal products to feed today’s population. Plant and animal and biology have allowed us to produce more and more, with less and less. The only way to feed a growing population sustainably, without significantly increasing costs of production, is to use scientific advances. Scientists do a great job talking to other scientists and publishing our findings in scientific journals, but we spend minimal time talking to non-scientists and consumers.

Arizona Agriculture: We’ve talked extensively in this magazine about the future the vet school at U of A, but not as much about what it will mean for the agriculture industry in our state. Can you share some thoughts on this?

Dr. Wright:  It will provide an opportunity for Arizona students to remain in Arizona to get their degree in Veterinary medicine and to stay here after graduation to practice animal health. Students will enjoy reduced tuition, compared to most other Veterinary Schools, with further savings by completing their DVM degree 1-2 years sooner than going somewhere else. With potentially smaller student loans than going out of state, Arizona students may be financially more able to return to their hometowns, or to rural areas, to work with agricultural animals.

Editor's Note: This article originally appeared in the February 2017 issue of Arizona Agriculture.