Will Arizona Agriculture’s Farmers and Ranchers Embrace Drones in Agriculture?

By Julie Murphree, Arizona Farm Bureau: A high-tech drone, or an unmanned aircraft system () as the industry likes to describe them, is coming to a field near you. In fact, you may be the farmer or rancher at the controls. And, not surprisingly our industry may be driving the biggest use of this technology.

Just late last month (March 24, 2015), Michigan Farm Bureau member Jeff VanderWerff explained the value and risks of UASs in agriculture in his testimony before a Senate subcommittee. The farmer and agronomist discussed how farmers and ranchers are leading the way in exploring commercial use for this technology.

According to VanderWerff, would provide a valuable tool for farmers and ranchers to manage their fields and respond to threats quickly before they turn catastrophic. “Currently, I spend about 12 hours a week walking the nearly 3,000 acres of land we farm. This may be effective, but it is not efficient,” he said.

can also help farmers reduce their environmental impact. “With the imagery from unmanned aircraft, I can spot-treat sections of my fields as opposed to watering and spraying the entire field,” VanderWerff said.

But today flying a drone for commercial uses is illegal -- at least technically. The Federal Aviation Administration (FAA) provides for exemptions under its Section 333. Under pressure from Congress and the industry in general, FAA is granting case-by-case authorization for certain unmanned aircraft to perform commercial operations. Once its finalization of the Small Rule is complete, which will be the primary method for authorizing small UAS operations in the near future, drones will be flying the friendly skies.

It’s approved more than 100 exemptions under Section 333 since the early part of April. While several hundred await approval. And according to Farm Journal, the agriculture industry is expected to capture nearly 80% of all commercial Drone use. 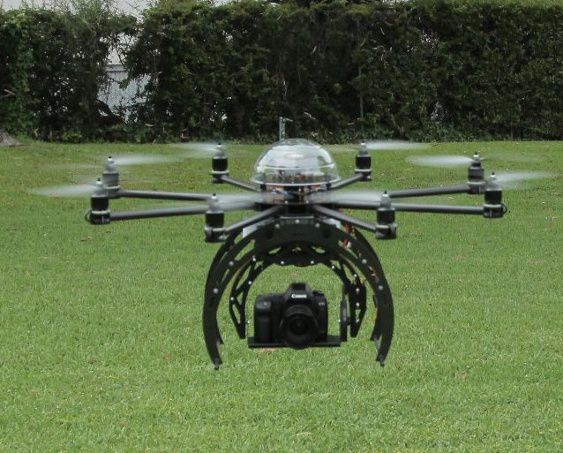 So, what’s happening in Arizona agriculture on this front? The answer is , “a lot!”

“Many Yuma-area farmers are testing Unmanned Aerial Vehicle technology in their farming operations,” explained Executive Director for Yuma Center for Excellence for Desert Agriculture Paul Brierley.  “The predominant use today is to get simple aerial imagery of their fields in a timely and cost-effective manner. Visuals that you don’t see from the field’s edge, i.e. driving by on the roadway, allow you to see stresses such as lack of water, and damage from pest infestations and disease pressure. More advanced imagery such as NDVI/Near-infrared and thermal imaging allow them to ‘see’ things that are un-seeable to the naked eye, such as plant stress and vigor, crop maturity and yield, and early disease/pest detection – before damage is apparent.”

One area farmer in Yuma has big plans for drone use. "We plan on using this technology to enhance the evaluation of our wheat varieties," says Arizona Farm Bureau member Tim Dunn who grows everything from wheat, peas to seed for broccoli and much more. "We want to bring better varieties to the marketplace that benefit both the consumer and the producer.  Real-time collection of data and the ability to process this data is now attainable. We plan on ground truthing this data in cooperation with the UofA and a milling partner. Ultimately the grower will be able to make better management decisions using a variety specific data."

So, of we have to ask Dunn what "ground-truthing" means "When you fly the field and take images they come out in different colors," he said. "You take samples from the field to know areas and get data and verify or 'truth out' your images to determine what the colors mean."

It’s not unusual for America’s farmers and ranchers to embrace technology that allows their farming businesses to be more efficient, economical and environmentally friendly. It makes me think of why my dad, Pat Murphree, was a pilot. Now, we can do the same visual work but even better with a drone. As so many farmers and ranchers will tell you, if any new technology allows for improvements, and reduction in input costs, they’ll apply it to their production agriculture.

Michigan’s VanderWerff sees these benefits firsthand on his farm where he uses precision technology. “I rely on data to produce the accurate information critical to my day-to-day business decisions. These decisions affect my yield, environmental impact and ultimately the economic viability of my farm,” he said.

Precision technology does not come without potential risks, however. Farmers and ranchers must be sure their data is secure and cannot be used unfairly against them by any third party, including the government. “The use of unmanned aircraft will be an important addition to a farmer’s management toolbox, but it is critical that the data remain under the ownership and control of the farmer,” VanderWerff said in his testimony last month to the Senate committee.

“In the future, hyperspectral and other imaging tools will allow sensors to detect pathogens, pests and diseases on the crop, predict harvest dates and measure yields, and recognize each desired plant in the field so that all others can be removed – possibly by lasers rather than using labor or chemicals,” added Yuma’s Brierly.  “These sensors could be UAV-based, or they could be ground-based, equipment-based, or even satellite-based, depending on the application and the resolution needed.  The Yuma Center of Excellence for Desert Agriculture is working to establish partnerships that will “mature” military sensing technology for use in precision agriculture applications such as those mentioned above.”

The UAS industry forecasters predict drones will create tens of billions of dollars in economic development and create thousands of new jobs once commercial use is permitted.