Each year the Arizona Farm Bureau selects a person for long-term service to Arizona agriculture. This person has served Arizona agriculture for several years, been active in many fields and made many contributions to our industry.

John Olsen began farming in the Big Chino in 1951. During his 30 years he farmed over 2,000 acres and during the last John also managed the Keichefer Foundation Ranch running cattle. During the years of 1966 to he experimented with growing dairy heifers, running 2,500 head at a time. 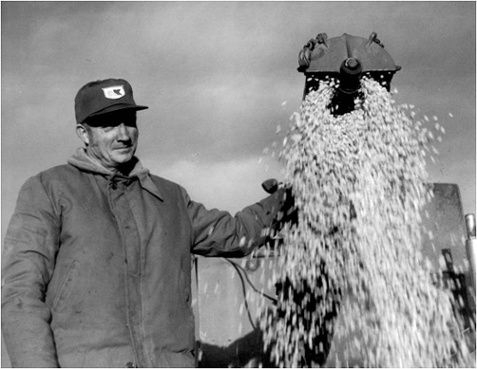 An earlier photo of his agriculture engagement, John Olson also received the Distinguished Service to Agriculture for his work in agriculture during Arizona Farm Bureau’s 92nd Annual Meeting in Scottsdale.

In 1953, John joined the Chino Winds Soil Conservation Board, which later became the Chino Winds NRCD board. He has remained on the board continuously for 60 years, serving as chairman off and on during this time. John also served on the State NRCD board and the National NRCD board.

He says one of his greatest accomplishments with the NRCD was getting the ditch banks lined in Chino Valley among other water and practices. When the 1980 act was passed and the Prescott AMA was formed, John got involved with the Ground Water Users Advisory Committee. He is still active on that board and actively involved in planning use by the cities.

In 1979, John and his son Mike opened Olsen's grain in Chino Valley as a retail outlet for their farming production. They have now grown to five stores across northern AZ and have remained very committed to 4-H and FFA youth. John also served on the County Board of Supervisors for 16 years, Community Hospital Board for 5 years, and Catholic Charities Board for 35 years.

John just celebrated his 90th birthday and up until last year was still flying.

“As you can tell, his passion for agriculture includes a strong passion for water conservation,” says Arizona Farm Bureau President Kevin Rogers. “We are very pleased to honor John Olsen with the Distinguished Service to Agriculture Award.”