By Steven Manheimer, Arizona Agricultural Statistics, USDA; with contributions from Julie Murphree, Arizona Farm Bureau: We’re eager to see the newest numbers on Arizona agriculture and specifically our organic agriculture in Arizona. Unfortunately, we’ll have to wait until 2014 to uncover what the latest Agriculture Census by the USDA tells us. In the meantime, we can look at the numbers from the last census and the specific 2008 organic numbers. 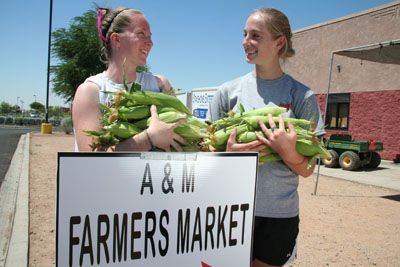 Did you know that nearly 58 percent of all organic farms had sales of less than $50,000 per farm? These smaller operations may be those that sell primarily to local markets and restaurants. Another characteristic of these smaller operations is that many of them produce nothing but organic production. On the other end of the spectrum, another 31 percent of organic farms had sales totaling more than $500,000 per farm. These most likely are operations that sell directly to large supermarkets and other large outlets. These large organic farms also accounted for more than 96 percent of total sales and organic commodities most likely just a portion of their total sales; the other 11 percent of organic farms fall somewhere in between these two other distinct groups.

Arizona’s Organic Farms Grow a Variety of Fruits and Vegetables

The Organic Production Survey also asked a series of questions to gauge the adoption of various production practices on certified or exempt farms. The top five practices used in terms of of farms were 1) using water management practices, 2) maintaining buffer strips, 3) using organic mulch or compost, 4) using no-till or minimum-till, and 5) using green or animal manures.

Marketing practices were also part of the survey. A large percentage of reported organic sales were to wholesale outlets although direct sales to retail and consumer outlets also reported by many farms. More than 75 percent of all organic sales occurred within 500 miles of where it was produced with more than half of all sales within 100 miles.

Organic grower Arnott Duncan in Goodyear confirms these survey results. While growing a variety of organic produce, Duncan says, “We are already in the process of transitioning more ground for organic production.”

A few years back, Duncan Family Farms spearheaded the launch of the Wigwam Farmers Market in Litchfield Park. The farm currently sells their organic produce as raw material to the salad processors who distribute nationwide and in some cases, internationally.  "We have always wanted to make our product available locally and are doing this with the Farmers Market and our CSA (Community Supported Agriculture) program."

Organic Agriculture throughout the United States

The 2008 Organic Production Survey counted 14,540 organic farms and ranches in the United States. Of these operations, 10,903 were USDA certified and 3,637 were exempt from certification. Organic operations comprised 4.1 million acres of land in the U.S.

U.S. organic farms and ranches had nearly $3.2 billion in total sales in 2008. Livestock products and vegetable sales accounted for nearly half of all organic sales that year. An average organic farm had annual sales of $217,675 that year. In comparison, according to the 2007 Census of Agriculture, an average U.S. farm overall had sales of $134,807.

Organic production in the U.S. is projected to grow over the next five years, with more than 78 percent of certified and exempt producers indicating that they plan to maintain or increase their organic production levels.

And, as you might expect, Arizona organic production might have some catching up to do with states like California, the state’s organic farmers and ranchers have staked their claim. Says Duncan seeing the opportunity in Arizona, “I have not farmed organically anywhere else, but I would think that our dry climate would be less than favorable to certain plant diseases.”