By Julie Murphree, Arizona Farm Bureau: Arizona agriculture’s wine industry can mark 2014 as a good year for wine in the state. Plus, the state’s wine industry and various individual wineries in the three main wine regions continue to receive considerable regional, statewide and even national recognition. And, as the local Arizona market continues to grow and local restaurants are responding to consumer demands for more Arizona wine, our Arizona growers are looking to expand the acres planted in wine grapes. 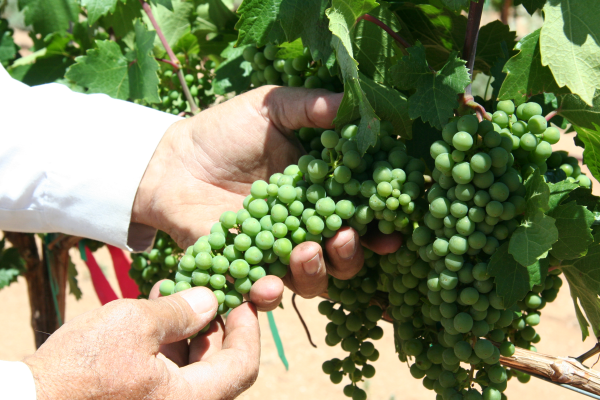 The majority of Arizona wine grapes are grown in the Willcox region (Cochise County), according to a USDA survey. This million dollar industry could be hampered if water issues in the area are not resolved.

A recent survey conducted by the United States Department of Agriculture (USDA) helps tell this exciting story. The survey, “Arizona Vineyard Survey – 2013,” released September 2014 and was sponsored by the Arizona Wine Growers Association and conducted by USDA’s National Agricultural Statistics Service. Consisting of a census of known Arizona vineyards, 96 potential operations were included and 64 reported planted acres in 2013. Twenty-six reported no acreage in 2013. Six operations did not participate. A final response rate of 94 percent was achieved.

In the Arizona Wine Growers Association 2014 Annual Report, outgoing president Peggy Fiandaca said, “It is an exciting time to be a part of the Arizona wine industry. Arizona wine enthusiasts have discovered that this state is producing terrific local wine as evidenced by the number of restaurants showcasing Arizona wines.”

Fiandaca, also an Arizona Farm Bureau member, suggests that Arizona agriculture's wine industry has some of the greatest because of its clear recognition by wine enthusiasts on the local, national and international level.

This was the first set of comprehensive statistics for Arizona’s growing vineyard industry and will serve as the benchmark for future surveys for the industry. A few highlights of the survey follow.

One of the interesting footnotes in the survey, “Virtually all of the grapes produced in Arizona were used by each vineyard’s winery operation. Very little of the Arizona grape production is actually sold so publishing a value of grapes sold was not possible. Growers in the survey were asked the price per ton they thought they could get if they were to sell their 2013 production. The survey averages were applied to tons produced to produce a statewide value of production not a value of sold.”

Newly elected president the Arizona Wine Growers, Rod Keeling of Keeling Schaefer Vineyards was not surprised by the USDA’s survey results. “It confirmed for us what we already knew that the Willcox area would be a leading producer of wine grapes and hopefully into the future.”

The fruitful production of wine grapes in the region is of even greater concern for growers, and farmers in general, due to water concerns in the area. “We’re facing a lot of challenges with groundwater management in the Willcox basin,” said Keeling. “And, we have legislation this year that’s very important to the wine industry.”

Speaking about his new role with the Wine Growers, Keeling added, “One objective is to improve the management of the association and the product being delivered.”

When asked about a focus for the industry in general, Keeling answered, “Right now a number one responsibility would be to protect and defend right and retain water rights. A second priority would be to establish a more defined wine brand for Arizona. We’re committed to having a focus on quality and authenticity.”

Keeling and other farmers in the Cochise County area when it comes to water issues are often heard saying, “We’re looking for a third way, other than INA [irrigation non-expansion area] or AMA [active management area],” noting that both are options too but greatly reduce a farmer’s options and opportunities for farming in the area since both an INA and AMA prohibit new agricultural lands from being developed.

“We have to have flexibility,” explained Keeling. “If we’re locked out because of water restrictions, the industry is unable to grow. We’re fortunate to have consensus with other farmers in the area.”