Arizona Farmer Shares his 9 Secrets to Success in Business

By Julie Murphree, Arizona Farm Bureau: The majority of Arizona Farm Bureau’s agriculture members are business owners. As a result, our farmers and ranchers thrive on the entrepreneurial spirit. And, these Farm Bureau members represent a deep reservoir of success. So, the next question might be, “How do they do it?”

One Arizona farmer tells us.

John Augustine, owner of Desert Tree Farm for more than 40 years, began with a dream to be his own boss. It all began with a couple thousand Blue Palo Verde trees planted in one-gallon fruit cans. From that single venture, Desert Tree Farm has grown into an industry-leading wholesale nursery, currently situated on 58 acres, in three valley locations. 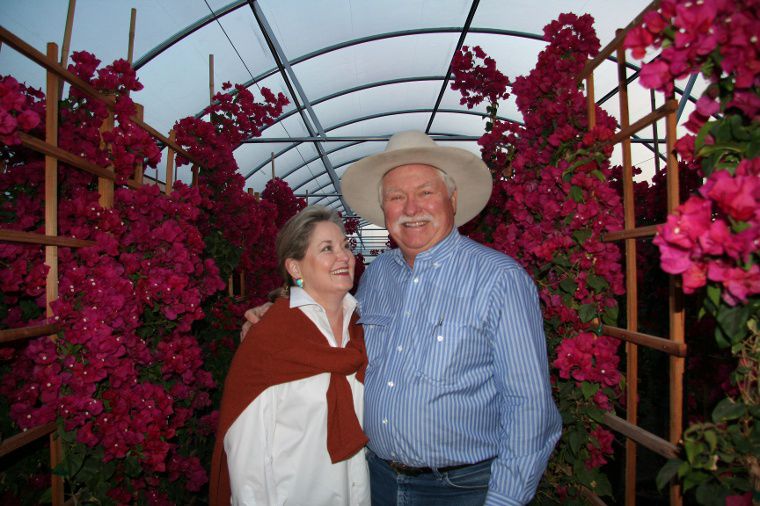 Augustine explains his motivation: “I always wanted to farm,” says Augustine. “I wanted to own my own company and develop, find a product I could successfully market based on what was needed. Good products come from the entrepreneurial spirit.”

He found that effectively developed product led to more market successes. In addition to numerous trademarked plants, Augustine has the distinction of having the first U.S. Ornamental Plant Patent in Arizona.  Desert Tree Farm is a leader in marketing wholesale plants and specializes in desert-adapted plants, but grows a full line of ornamental trees and shrubs. Two of his most prized developments in this area are the Desert Blaze and Phoenix Bird varieties, trees his plant nursery specifically developed for the Arizona climate.

He’s full of insights to make a business venture a success, but his most important piece of advice boils down to the customer. “Listen to your customers,” he says. “In fact, keep trying to create a market for your product to the point that you modify your product to match customer demand. As one saying goes, ‘the customer is not always right, but he’s always the customer.’”

Augustine, a fifth-generation American farmer, is diversified too.  He and his wife, Christine, also own a grain farm that includes the family homestead in Iowa, acreage of cotton and alfalfa in Laveen, AZ and a cattle ranch in Young, Arizona.

On diversity, Augustine has plenty of insights. “When you own a business, you need cash flow, so diversity,” he says. “If what you do only pays out once or twice a year you’ll be too indebted to the bank. At my I can now say I’ve been through five recessions and every one of them has been marked with the same influencing factors: greed, and bad government policies.”

He further states, “Carnegie is famous for saying, don’t put all your eggs in one basket; I say don’t put all your eggs in one state. Desert Tree Farm sells to several states and I have businesses outside of Arizona. The reason is, regionally economies will be at different stages in a business cycle. One will be doing very well, while another one might be struggling.”

For him, employees make a business. “If you treat employees well, they’ll take care of you,” explains Augustine. “I often tell my staff, I will take care of you the best I can and I hope you can help the business as best you can. You have to have people who want to work with you. Plus, you should consider giving them a piece of the action.”

On trying to become a business owner Augustine says, “Pick something that interests you and that will teach you something. This can be discovered through hobbies; interests in general.”

He suggests that the fear of failure is what makes so many individuals stop short of launching their own businesses. “Don’t be afraid to fail. Failure is not fatal, you can recover from it.”

Augustine also believes that if your only focus on owning a business is trying to hit it big quickly, you’ll certainly fail. “Success is not a destination, it’s a journey. Focus on challenging yourself to do better; plus meet with other entrepreneurs that are taking chances too.”

He takes this advice one step further. “In fact, find people that are successful business professionals and mimic them,” says Augustine. “Take counsel from them.”

Finally, plan ahead.  “It wasn’t raining when Noah built the Ark,” says Augustine. “This is sage advice to apply to economic upturns and downturns. When things look really good, they’ll be really bad. And when things are really bad, they’ll eventually be good again.”

A long-time member of Arizona Farm Bureau, Augustine is passionate about agriculture and believes that the advances the industry has made should be celebrated. The Augustines received the 2007 Farmer of the Year Award from Farm Bureau.

Engagement Beyond the Business

Augustine might not talk about everything he’s involved in, but if you discover his background and how involved he and Christine are in their community you have to conclude that’s part of their overall success.

Augustine attended Scottsdale High School and Northern Arizona University (2 years) before joining the United States Army where he served two tours in Vietnam as a Warrant Officer Helicopter Pilot. After returning to the States, Augustine served 10 years as a helicopter pilot in the Arizona Army National Guard.

Civically minded, Augustine has served on the boards of The Arizona Nursery Association, The Desert Botanical Garden, The Bank of Paradise Valley, The Bank of Scottsdale and The Phoenix Water Rates Advisory Board.  He has served as a member of The Phoenix Futures Forum, Paradise Valley Community Council and Development Services Advisory Board for The City of Phoenix. Augustine has been the nursery representative for Maricopa County Farm Bureau and is the Chairman of Arizona Farm Bureau’s Labor Committee.  He is also a member of the Arizona Agriculture Relations and serves as a national delegate to the Nursery Commodity Meetings representing Arizona Farm Bureau.  He serves as a board member of The Boy Scout’s Rough Rider Group and a member of The Arizona Cattle Growers Association. In 2007, he was elected a Salt River Project Council Member

While active in Desert Tree Farm, Christine has volunteered her time at The Heard Museum, Mission of Mercy and The Desert Botanical Garden. The Augustine’s support The Phoenix Children’s Hospital, Junior Achievement and St. Vincent de Paul; as well as many cultural entities in the valley. To support cultural awareness in Young, AZ., the Augustine’s have provided a piano for the local schools as well as funding for piano lessons for its students and supports The Pleasant Valley’s Volunteer Fire Department.

A lifelong student of American History, Augustine loves studying about our country’s agriculture legacy.  He is a long-time collector of antique tractors and farm and owns both riding and draft horses.

Augustine and his wife, Christine, have 3 children.  Two daughters are actively involved in the tree farm.  With 8 grandchildren, future generations of farmers are a distinct possibility.

2. Develop a product that's truly needed in the market.

3. Keep refining or modifying the product on behalf of the market need.

4. Listen to customers even when they're not right. You might discover product possibilities even when the customer doesn't know what he or she wants.

6. Diversify to more successfully handle the ups and downs of any given markets.

8. Failure is not fatal. Keep trying.

9. Get engaged in your community and industry.

Arizona Farm Bureau’s Farmer of the Year Award recognizes an individual who is innovative, a trendsetter, or who has shown exceptional leadership in Arizona agriculture.