By Dan Thelander, Pinal County Farmer, Farm Bureau member and recipient of Arizona Farm Bureau's Farmer of the Year: The potential for a water shortage is something our family is worried about and trying to plan for. But, how do you plan for a future water shortage? 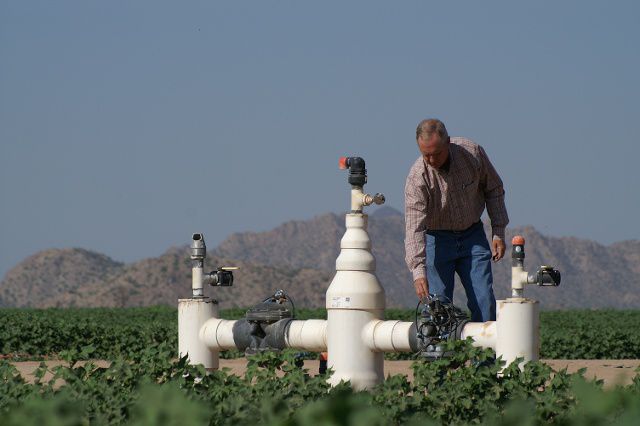 I farm with my nephew and son in the Maricopa Stanfield Irrigation & Drainage District (MSIDD). This year in our farming operation, we have 1,600 acres of Durum Wheat in production, 2,200 in alfalfa (400 acres of that is drip irrigated), 1,000 acres of cotton (400 in drip and 400 in and 200 of double crop following wheat, the Rayner system).

Last year, we had less cotton and wheat and 1,000 acres of silage corn.

In thinking about what to do now regarding water and shortage considerations, I believe there might be four ways to try to prepare for water shortages.

This is easy to suggest; hard to accomplish. Right now, most agriculture commodity prices are in the tank. Alfalfa is probably $50 to $75 per ton less than a few years ago, wheat is down $4 per hundredweight (100 pounds). Cotton, which is up some, is still about the same price at 70 cents-per-pound as when I started farming in 1974, more than 40 years ago.

So, with commodity prices low and margins thin, or upside down, it’s difficult to consider expensive irrigation system improvements, like installing drip irrigation systems. A quality drip system runs about $2,500-per-acre, and even though it is extremely efficient, it will take many years to recover that investment. Will there be sufficient water supplies in 6 to 8 years when, hopefully, a new system has paid for itself? Or, will water supplies diminish leaving a farmer with a nice system, but not enough water to run through it?

I often get asked, "Why don't you plant crops that use less water?" That certainly would save water, but it wouldn't keep our farm in business year in and year out. Barley is one of the lowest consumptive use crops grown in our area, but with the low price of corn in the Midwest, barley prices are super and planting it guarantees a nice big loss by year end. Even wheat, which uses just slightly more water, will probably lose a little this unless we make a higher than normal yield.

This one is similar to experimenting with low-water-use crops, but in this case, low water use is not really the benchmark. The payoff for any high-value crop is profitability. If a farmer can grow a higher-water-use crop that is also high value, then a farmer might have to fallow more acres to be able to plant and irrigate the crop, but in doing so, make a profit.

Take alfalfa a few years ago, for example. The price per ton was very good, but alfalfa probably uses in the 6-acre-foot range. Farmers could afford to fallow some land if needed to be able to irrigate this alfalfa. This is probably going to be the main way farmers deal with reduced water supplies, by fallowing enough land to grow the crops they consider to be the most profitable. Unfortunately, the downside of this is overhead goes up on farms and the local economy that depends on those really suffers as a result of reducing crop production.

A really nice scenario would be a new, high value, low-water-use crop! And Guayule just might be that crop in the future. Guayule is a desert crop that has rubber under its bark, like rubber trees. But, unlike latex rubber from trees, people are not allergic to Guayule rubber. Rubber production from rubber trees probably can’t expand enough as the world demands more natural rubber for medical uses, tire production, and other uses. Guayule should be able to fill that void.

It would be a great fit for irrigated desert farms where production could be increased to meet future demand. A few companies in recent years have devoted a ton of money and effort to figure out how to efficiently grow the crop and process the crop. Bridgestone Tire probably is the main company today conducting research with Guayule. In addition, other companies are doing research in Italy as well. The market is ready and waiting if the production problems can be solved.

I call this the RAYNER method of crop production. Ron Rayner is a farmer in Arizona’s west valley that has taken no-till farming to the next level. A typical cropping rotation for Ron Rayner’s farm family is planting wheat in December, follow that with Cotton in June (cotton is typically planted in early spring in Central Arizona), harvested in November, and back to wheat again for the next year and so on.

When they want to go to alfalfa, the Rayners plant sorghum silage after the wheat, then alfalfa in the fall. Their whole program keeps something growing year around on most acres. But, the amazing thing they have seen is reduced water use for their crops. They attribute that to increasing levels of organic and have seen wheat and cotton crops make good yields on all 4-acre-feet of water per acre total. Also, this could be a game changer in the MSIDD district (Pinal County area) as we go more to wells with less CAP water. It will allow the wells to operate more year round and not have the huge demand in the middle of the summer when normal cotton production water use is the highest. We are going to try this at our Stanfield farm this year and see if we can duplicate Rayner's success.

The farms in Central Arizona are already very efficient with modern irrigation methods such as basin level, high head systems, drip irrigation, sprinkler irrigation, and maybe soon to be farming for organic matter. Farmers will keep chasing efficiency as best we can, if we don't, we won't stay in business.

Part of planning for future water shortages is trying to avoid them as much as possible. For this reason, we also have our eye on the potential causes of these shortages. And, in addition to drought in the Colorado Basin, which thankfully this year has lessened with a much better snowpack, the state negotiations to keep Lake Mead at elevation 1,075 or higher has some pitfalls for CAP agriculture districts such as MSIDD. We in agriculture are at the table and will continue to support the concept of the Drought Contingency Plan, but some models show that the entire agriculture pool goes away when the Lake falls below 1,075. We cannot support a plan that leaves us with no water in that scenario especially if our sons and daughters, the next generation, are interested in farming. There has got to be or the opportunity for us to buy affordably priced surface water from the CAP, Indian Tribes, or cities. We just don't think it’s fair for farms to dry up and blow away when others are receiving most of their water allocations.

So, Farmers will strive to keep farming profitably with less water, searching for better methods, better crops, and better systems to farm those crops. At the same time. We will be at the table to ensure that we have a fair shake in the event that lake levels continue to drop.

Editor’s Note: Thelander originally shared his story last week to a group of peers and agriculture industry professionals at the University of Arizona’s WRRC Conference 2017, themed Irrigated Agriculture in Arizona: A Fresh Perspective.