Celebrating Arizona Pecans on Rosie on the House

“Pecans are America’s nut,” explained Deborah Walden Ralls, Green Valley Pecans Vice President of Industry Relations, this past weekend on KTAR’s Rosie on the House show during the “Farm Fresh” hour at 8:00 am. When you discover Pecans are indigenous to North America and that the approximately 1,000 pecan varieties are mostly named after Native American tribes, it makes sense to call these very popular and healthy tree nuts America’s nut.

Walden Ralls is part of a third-generation family farm in Arizona that started with her grandfather Keith Walden after switching from traditional crops like wheat, cotton and alfalfa. In fact, Green Valley Pecans was once the world’s largest vertically integrated, family-owned pecan farm until another American-based pecan farm took over the distinction a few years ago.

While our pie bakers may know it takes an average of 78 pecans to make a pecan pie, they may not know that pecans are heart-healthy and contain 19 vitamins and minerals. And, pecan trees are alternate bearing and have a bountiful crop only every other year.

During the show, we asked Walden Ralls all sorts of questions about the pecan including other health benefits, how to care for a pecan tree, what inspired her grandfather to plant a pecan orchard and so much more. Our favorite part was hearing her recipe suggestions. After this list of pecan facts, listen to the radio segment embedded in this article below. 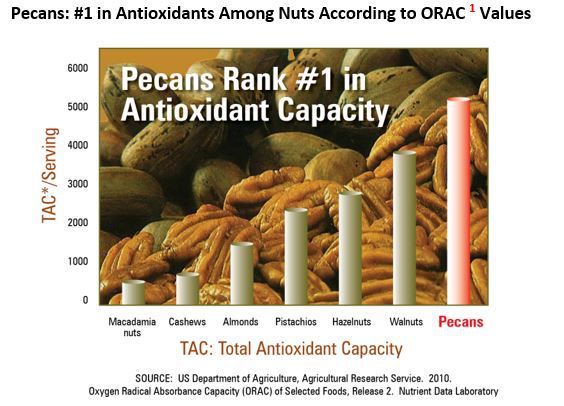 developed by scientists at the National Institutes of Health.

These facts below are provided by the National Pecan Shellers Association, the American Pecan Council and the Walden family.

Check out what else Walden Ralls says about this healthy nut. She may be partial since she’s a pecan farmer, but she reveals some exciting truths about this versatile nut.