Making Every Shape and Size of Agriculture Matter: Ag Secretary Tom Vilsack Reminds Us How

By Julie Murphree, Arizona Farm Bureau: One of the sublime privileges of being a part of the Farm Bureau family means one hears from fascinating leaders. Last week’s trek to San Antonio for American Farm Bureau Federation’s 95th Annual meeting meant I got to hear from our current Secretary of Agriculture Tom Vilsack during one of the convention’s general sessions.

While much of what Secretary Vilsack talked about centered on the Farm Bill, I was struck by what he said close to the end of his speech. It felt as though he truly understood the industry’s challenges; at least was acknowledging them. He expressed an intimacy of experiences anyone listening had to appreciate. 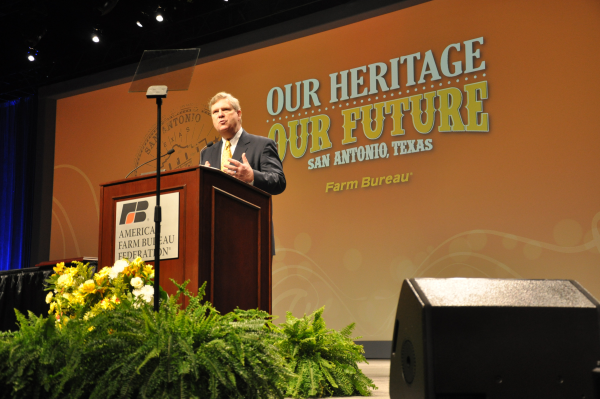 As he came to wrap up his talk, Vilsack addressed how America perceives agriculture and oftentimes the consumer’s distorted view of reality. “My guess is if I took a poll and a survey of the folks here today that you might feel that agriculture is not as appreciated as you believe it ought to be, and I would share that feeling. The reality is so many Americans are so far removed from where their food comes from. They may be three, four generations removed.

“We have to continue to be dedicated to educating our friends who live in suburbs and in urban centers and even in small towns near our farms and ranches. We need to continue to educate them on exactly what farming is and what it does. We need to educate them about the impact that farming has on jobs in America, on what farming does in terms of water and land resources. I think we need to remind them that they are fortunate to have this extraordinary diversity, and that unlike many, many people in the world, they don't have to worry about where their food comes from, that they actually have the capacity within their own borders to produce what they need to eat and feed their family. I think we need to remind them of the fact that they've got a little extra flexibility with their paycheck that people around the world don't have. So I think we have to educate, and I think we’ve begun to do that.”

Vilsack is right. We have to be vigilant in telling American agriculture’s story. Certainly, my ears always perk up when I hear industry and political leaders talk about our ever important effort to educate the public about farming and ranching, in its small and large forms; organic and conventional. Vilsack said, “I think we have to be open to diversity, and by diversity, I mean diversity of operations. We really shouldn't have a discussion within agriculture of whether you should be big, middle-sized, or large. We should be celebrating all forms and all types of agriculture, because there is a common bond of those who grow and produce, a common understanding of the connection to the earth, a common appreciation and respect for that enormous capacity to grow, and a common wonder every year about how Mother Nature helps or hurts production. I think we need to embrace diversity within our operations. If somebody wants to be an organic producer, God bless them. Somebody wants to be a conventional producer; they should be able to be. Somebody needs and feels the desire to use GMO to increase productivity, to reduce pesticides and chemicals because they see it better for the environment and they see it as a way of helping meet this enormous challenge of feeding the world, they should be allowed to do that as well, and we should be working to make sure that everyone has the capacity and the opportunity to choose the operation that's best for them and their family and not be judgmental about any of them. And I think we ought to be embracing diversity in terms of location. Not every farm necessarily has to be in a rural area. Maybe it might be helpful if there were some opportunities in urban centers, so that people would understand the risks that are associated with farming and how hard work and how challenging that work actually is.”

God bless Vilsack. He gets it (and thank goodness since he’s our Ag Secretary).

During his speech to more than 7,000 farmers and ranchers in the general session at American Farm Bureau’s Annual Meeting, Vilsack became very personal and poignant at one point: “But when it's all said and done, I think the one thing that we have to do and we haven't done as good a job—and I'm certainly going to try to do a better job of this—is to try to summarize in one word what agriculture means. I thought about this. Some of you may know that I'm an orphan, and so I don't really know much about my background. So, as a result, I'm sort of overly interested in my adopted family's history, and it wasn't until long ago, just a few months ago, that I found out that my great-grandfather on my father's side was a farmer. So that means I'm—grandfather, father, myself — I'm three generations removed from the farm. Now, that farmer, Jacob Vilsack, was successful enough that he was able to have children, and those children had options. And one of those children decided not to farm but to go into business, into the brewing business and established a very successful brewery in Pittsburgh. That brewery business enabled him to have 12 children, and it enabled him to expand his operation beyond the brewing business to include a banking opportunity and real estate and several other business opportunities that he then made available to his children. And his children went in—my father went into the real estate business. Because of his work and sacrifice, he enabled me to have the best education in the world, and that gave me the option to choose to be a lawyer. I became a country-seat lawyer. occurred in my small town. It opened up an opportunity for me to get involved in politics—mayor, state senator, governor, and now Secretary of Agriculture. But it all started with agriculture.”

is a legacy of family - adoption and embracing of family tradition - and farming. As Vilsack closed, he brought it back to those farmers and ranchers sitting together in the assembly.

His final comments follow (we’ll let his words speak for themselves).

“The reality of this country is that not long ago, virtually everybody in this country did not have the options that my family had, that the only option was to stay on the because staying on the farm meant survival for you and your family. There wasn't any thought about moving off the because there simply wasn't the opportunity or the option, but then along came generations of farmers, like yourselves. Along came folks who said, "You know, we can do better. We can expand production. We can develop machinery that will allow us to do more work," and over time, 90 percent of the population that lived in Rural America and that farmed when this Department of USDA was founded, 90 percent slowly reduced. So, today, it's 15 percent who live in Rural America and less than 1 percent who farm. What do the other 99 percent do? What options do they have available to them because they don't have to worry about where their food comes from? They are not required to stay on the farm because there is less than 1 percent of America that's handling it, that's producing so much that we can feed ourselves and feed the world. Every person in this country today has that option to live someplace else and to be someone else, to be a lawyer, to be a teacher, to be a doctor, to be an engineer, to be a construction worker, to be a business owner, to live anywhere in this country. Why? Because we have farmers who are so good that we don't have to worry, and we get to do what we want to do.

“So my final point is freedom. That's what you mean to this country. It's more than food security. It's more than paycheck flexibility. It's the extraordinary opportunity in this country that you can be whatever you want to be, not just simply by dreaming big dreams, but because you've got somebody somewhere in some rural community on some farm or on some ranch, in some orchard, producing enough so that you've got the nutrition to be whatever you want to be, and, folks, that ought to be celebrated. The country ought to be reminded of it, and every farmer in this country should be valued, appreciated, and because we in this country have been extraordinarily blessed by you. God bless you all.”