By Julie Murphree, Arizona Farm Bureau Communication Director: I love history and when you read this Arizona agriculture family’s story you’ll dive into some amazing history about their family farm roots in Arizona’s soil.

The Bales family of Buckeye, Arizona can share plenty of agriculture history, not only of their family but so many long-time Arizona agriculture farm families. What is revealed and serves as a common theme is the strong work ethic, the perseverance in the midst of hard times and the willingness to look to the future and build for better days. 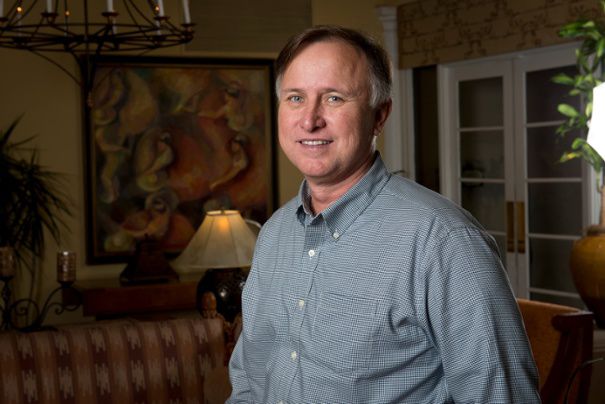 Stephen Bales, Jr. comes from a farming family that's been farming and ranching in Arizona since the late 1800s.

The Bales advice about success in business is worth noting and it involves a pair of well-worn work boots.

An ongoing series of Arizona’s farmers and ranchers

Tell me about your farming: I am a 5th generation Buckeye, Arizona farmer. We have been in the ranching, feedlot and farming business. I grow cotton, grain and forage crops. I earn my keep full-time as a farmer, but spend considerable time with professional, civic, business and church organizations and also serve on a bank board.

Your family has quite a history of farming in Arizona. Yes. To begin, W.R. “Bob” Beloat and his brother, John R., came west from Arkansas to California in 1886 but they didn’t stay there long; they came to Arizona to the Chino Valley north of Prescott.  Determined it was too cold, they came down to the Gila River, where he filed on the first homestead in 1891. The Beloats were the first white men to drive a herd of cattle to the west valley in the Buckeye area. His family filed on their second homestead in 1901.

John R. got pneumonia after helping move a herd of cattle across the Salt River at Hayden’s Ferry and died. He lies in the oldest marked grave in the Liberty Cemetery in Buckeye.

W.R. “Bob” and his wife Mary had 14 children.  They built the big house that still stands east of the intersection of Beloat and Airport roads east of Buckeye, at the headquarters of what is now Bales Hay Sales.  Even that big house might have been a tight fit for 14 children!

Bob started out grazing cattle the desert in the Buckeye Valley.  After the Buckeye Canal was built, they started farming.  Bob was instrumental in developing the Buckeye Irrigation District through the building of the Buckeye dam on the Gila just below the Aqua Fria River.  He was a director of the district beginning in the second year of its operation and the family has served on the board ever since. One of the sons, John, then farmed the home place with some of his brothers.

Meanwhile, Thomas Bales came to Arizona from Idaho in 1916 because he had arthritis and needed a warm climate.  He arrived in Vicksburg in a rail car, lying on a stretcher. He and his wife and four children settled there and ran cattle all the way from Parker on the Colorado River to the Harquahala valley.  The family drilled 17 small wells that pumped water with gasoline engines.  One of the sons, Harvey, would lead a pack train carrying gasoline to service those wells.

During a drought in the 1920s, they brought the cattle Litchfield to graze on the alfalfa. Shortly after they moved to Perryville Road in Liberty about 1930.

Alberta’s brothers, James and Kenneth, were ranchers and ran cattle over about 200 sections of land, centered on land they owned in deep Rainbow Valley.  At roundup time they would start gathering cattle somewhere around the Gila River, move as far north as Wickenburg, circle to the Harquahala Valley, move on down to Gila Bend and circle on back to Rainbow Valley.

Wallace and Alberta bought half a section of land in Rainbow Valley. Wallace drilled the first water well for agriculture there in 1958. The family drilled two more wells over the years and increased their holdings to 500 acres of deeded land plus state leased land. Also around this time they began farming the Beloat home farm and bought it in 1975.

Their son (my dad), Steve, farmed with the family but in 1990 he leased a cattle ranch near Rio Rico, where he ran a cow-calf operation for 11 years before he sold out there. He ran the feedlot at the home place for years and grew alfalfa and grain.

In turn, I started as an employee on the farm in 1985, took over management of crop production about the turn of the century. I helped to oversee the cattle feeding operation until 2002 when my dad shut it down.  I continue to farm cotton, and grain on the home farm and lease land around Buckeye.

What is your educational background (i.e. Degree(s), certifications, honors)? I have a degree in Ag Economics, 1983, from the University of Arizona. I was on the National Cotton Council Leadership program, 1994-95, Arizona Cotton Growers Director and President in 2008.

Will anyone in your family – younger generation – pursue farming, ranching, or agribusiness? Yes, my son, Trevor, is the sixth generation of the family to farm and ranch in Arizona. 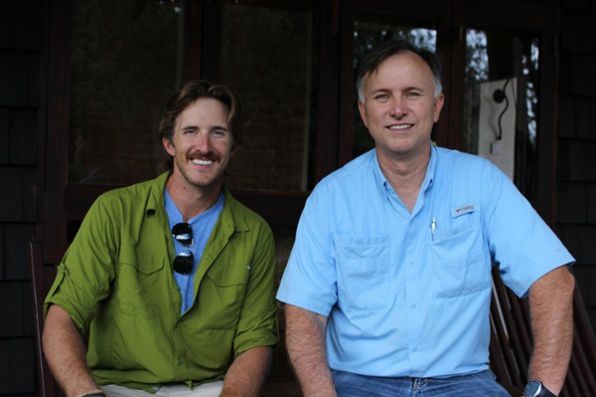 Father and Son: Trevor (left) represents the 6th generation of Bales to farm in Arizona. 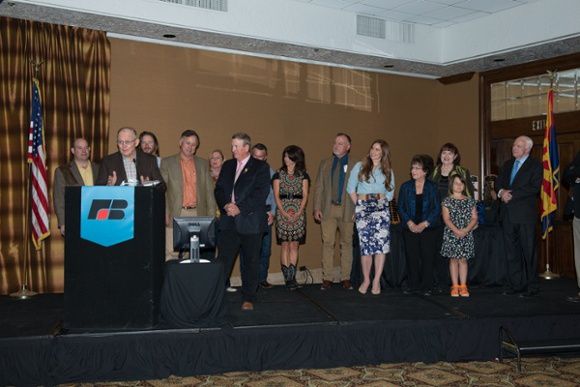 Last year, during Arizona Farm Bureau's Annual Meeting, the Bales family received the Heritage Award, recognizing individuals and families that are involved in agriculture and have given extraordinary voluntary service to their industry and to their Farm Bureau. Steve Sr. is at the podium receiving the award, his son, Stephen Jr. is to his father's left. On stage to recognize the family was Senator John McCain (far right), Arizona Speaker of the House of Representatives David Gowan (far left) and Arizona Farm Bureau President Kevin Rogers.

I serve my church, Way of Grace, as an elder and Sunday School teacher, 2-5th grades. 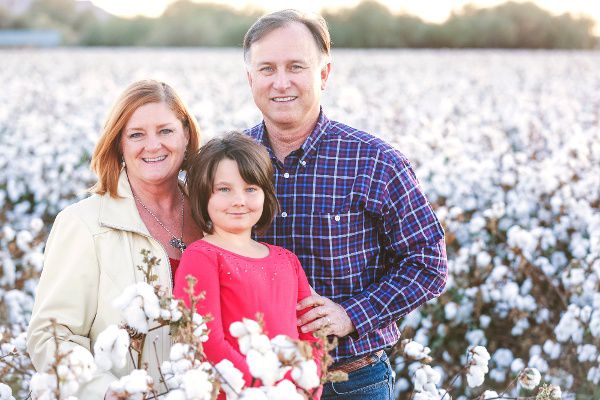 Wife, and Stephen, here with their grand-daughter, Ryann, are very involved in their community and church.

What do you love the most about farming, ranching, or the agriculture industry in general? Innovation and technology are hallmarks of our agriculture, but so is diversity. We grow an alphabet of crops – sometimes relatively small acreages that produce a huge supply of the country’s roses, or leafy greens, vegetables or nuts…just to name a few. So we are marked by diversity.

We are either planting or harvesting a crop every month somewhere in Arizona. The American farmers’ success and productivity placed the U.S. in a position of strength globally but has also served to lull the public into a since of entitlement and complacency. We have to continually tell our story to the public reminding them that we are the original environmentalists and the true stewards of the land.

Why are you a Farm Bureau member? The services and benefits of membership far outweigh any time or resources I may contribute to the organization. Farm Bureau is the voice of U.S. agriculture and our most ardent advocate in the political arena.

How will the next generation of agriculturalists have to operate? In the past, farmers have said to the world, “Leave me alone and let me do my job, you won’t be disappointed!” That work ethic has served us well but it also allowed the “other side” to dictate the narrative. The new generation of farmers will have to be active participants in the story going forward. They will have to continue to feed the world and be in front of the public telling the good story of U.S. agriculture.

Seen here checking farm equipment, Stephen Bales and his family have always diversified their farm business. Additionally, they believe in being hands on in the operation.

What is the best business advice that you’ve received and/or have given? Or, what business-oriented advice would you give young farmers/beginning farmers? One of the strengths of Arizona agriculture is its embrace of technology and its innovations. 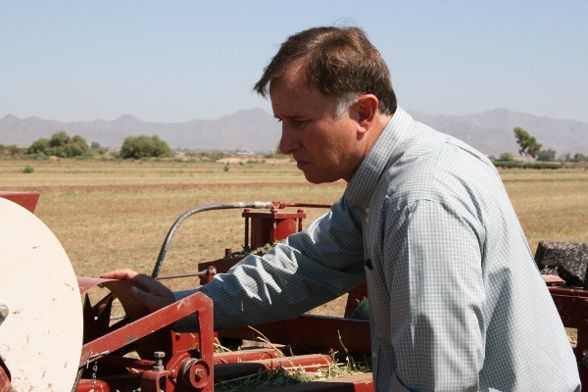 The very wise and older generation that I was raised around would say to me, “The best thing you can put into your farm are your boots on the ground.”

I used to hate hearing it. I wanted time away from the everyday demands of farming and like every young man, to go and enjoy my hobbies. But with time I came to realize how right this saying and advice is for today, just as it was for yesterday.