Everybody has a story. John P.  Babiarz, citrus farmer from Maricopa County and Arizona Farm Bureau member is solid proof of this. In 1994, as an amateur fossil collector, Babiarz acquired an unusual skeleton belonging to an extinct sabertooth cat. It was actually one of two specimens, discovered several years earlier, found in a limestone quarry sink-hole, in Florida. He’s had a life-long fascination with this pre-historic taxa, and this one was an unusual find.

According to paleontologists, this was not only a new species of saber-toothed cat but also a brand-new Genera.  The infamous Smilodon (Sabertooth tiger) was, at the time, considered the Arnold Schwarzenegger of saber-toothed cats.  But this new form would certainly hold its own with any Smilodon of any era.  Actually, the genus Smilodon, at the time, (1.2 million years ago) was rather diminutive, only about the size of an extant Jaguar. It’s called Smilodon gracilis. The new discovery, (Xenosmilus hodsonae) had unusually stocky limbs, large feet, and sharp, coarsely serrated upper canines. The 1.2 million-year-old skeleton combines the deadliest adaptations of several known saber-tooths – powerful front limbs and sharp, serrated teeth, making it more threatening than any other class of cat brethren at the time.

Babiarz knowledge of Sabertooths eventually led him and co-authors, to write a book: The Other Saber-tooth’s.  He’s been written up in Science Magazine, National Geographic and has appeared on BBC, Discovery Channel, and other science shows. He’s one of the go-to experts when it comes to these pre-historic cats.

When going back-and-forth to learn more about his hobby, we said, "We need to tell more stories about you!" His joking response: "I keep a low profile."

And, by the way, he has a citrus tree nursery off of the I-202 freeway in Mesa.

An Interview with John Babiarz, owner of Greenfield Citrus Nursery in Mesa, Arizona

An ongoing series of our farm and ranch businesses.

Tell us about your tree nursery : We started this farm in 1979, calling it Greenfield Citrus Nursery. We started out on Greenfield Road, and thus, this was how we came up with the name. I started on 52 acres of leased land, along Greenfield Road, between Brown and University. Our north boundary was Adobe Road, still dirt back then.  After the property was sold for development, we scrambled around looking for a new location.  With the money that I had stashed away in savings, and of course, with the help of Chase Bank, I bought the 10 acres where we are currently residing.  This was back in 1986. When I bought this property, the land was just an empty pasture, nothing growing there at all except for one paloverde tree and a mesquite tree along the road, along with a ton of Johnson Grass along the irrigation lateral.  So here is where we started again, then in 1988, I bought the 18 acres, just to the south. We moved 10,000 seedling trees from the Greenfield Road site to this new location.  Then we moved the 60x80 sq ft barn, built a residence/office, and started from scratch again; But this time, I owned the land.

John Babiarz is a citrus tree farmer that happens to be an accomplished Paleontologist.

Any farming practices that highlight water conservation, soil health or other special practices you instituted to save money and improve the farm ? Our focus is water conservation, pretty much, what all of us in agriculture try to do. Water is always an issue, but certainly not as expensive as in California where it can run $500 an acre-foot. Here it’s about $19 to $20 an acre-foot, 326,000 gallons for $19 dollars. Sometimes we actually wait for several weeks before irrigating, due to tree harvest scheduled. Since I am allowed to schedule my own irrigation times, this system works well. If you have an irrigated yard or an irrigated site with a specific schedule, for example, every 13 days in the summer and once a month in the winter, you have to take the water when it is scheduled by SRP or Roosevelt Water and try not to flood out your neighbors, LOL.

Sometimes I’ll try to extend that period to 2 ½ weeks, even in the summer, thus I can conserve water.  Winter irrigation times can exceed 30 days due to cooler weather and hopefully rain.  Of course, there is always the chance of needing Frost water. If a neighbor is watering and we see some tail water, we will try and use it. Tailwater is the water that runs out of the field after they finish irrigating the rows. We adjusted our system so as to incorporate it into our watering, certainly good to use to water the roads for dust control.  We’re set up that way here, so we can maximize the use of water. Drip irrigation is commonplace in California, but here we still flood irrigate.  Either way, we still use a lot of water.  No getting around that.

Says John, "Here's what the Xenosmilus hodsonae skull looks like."

What is your educational background (i.e. Degree(s), certifications, honors) ? Due to health reasons, like many folks back then, I moved to Arizona, spending my last six months of high school here. I graduated from Tempe High School in 1965.  Then I spent 2 ½ years attending the University of Miami, (Botany Major) before returning to my home state of Connecticut.  I took a job working as a carpenter but always longed to move back to Arizona.  I returned to Arizona in the fall of 1969 and got a job working at Camelback Inn, in Scottsdale.  At the same time,   I started taking Business Classes at Phoenix College, and then later enrolled at Scottsdale Community College.  I started my own business in 1972, while still working for the Marriott cooperation.  I was selling orange trees on the street corner on weekends and with my roommates helping.   We slowly began building up a clientele.  That’s how it all started; Every weekend, Saturdays and Sundays, and all holidays, we would be selling salvaged trees we purchased from old citrus groves,  then under new home construction, on the corner of Tatum  Blvd and Bell Road. We were always saving money to invest in and expand the business, minus beer money of course.

What are your community activities ? I do a lot of work within the Paleontology community, and support Paleontological Research at several colleges. I’m also a proud member of the Arizona Farm Bureau. We host several agriculture school tours a year, and we also host the U of AZ Maricopa County Extension Service annual citrus clinic here at our farm. My wife and I have been doing this for about 19 years. I also am one of the annual speakers. This year we had approximately 230 people attend the clinic. Last year we had almost 300. It’s an interesting program and certainly educational.

What do you love the most about farming, ranching, or the agriculture industry in general ? Well, I certainly like the smell of citrus flowers in the Spring and the fruit is very healthy for you. I’ve always said, people always need several things to sustain themselves. 1. Water 2. Shelter 3. Food. So, if you can grow or supply any of those three major items to the public, then you’ve got a fighting chance to succeed in the business. Most everyone likes citrus and they’re full of vitamin C. Citrus is versatile and well worth the effort to grow. Also, Citrus honey is the best.

What do you enjoy doing, and what is one fact/achievement that nobody knows about you?

Well, I’ve been featured in the newspaper several times, but mostly when Frost hits the nursery business in Maricopa County.  I was featured in a Discovery Channel program years ago, Scuba- diving for fossil Megalodon shark teeth in South Carolina. It was shown during “Shark Week” for years.  Forever young, once you are in the movies they say.  Ha.  But I suppose most people don’t know that I’ve written two books about my favorite critter, Saber-tooth Cats.  I’ve participated in the National Geographic series, Prehistoric Predators, which we filmed at the ASU Geology Museum, and twice in BBC features. But of course, these films had nothing to do with citrus, it’s Paleontology.  The Citrus pays for the Paleontology…LOL 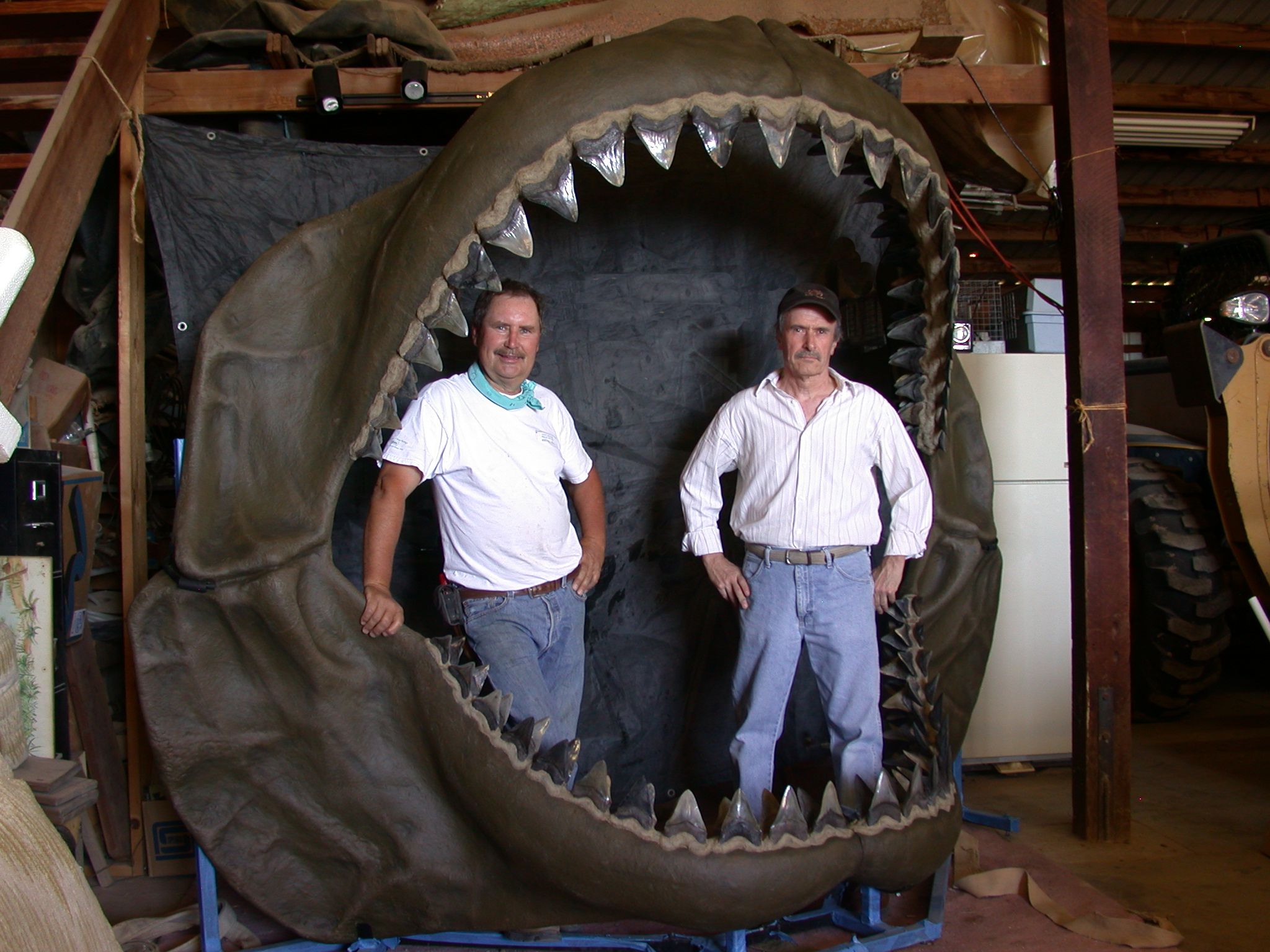 "Have you ever seen one of these Megalodon shark jaw reconstructions?" asks John.  "These are all real fossil teeth.  I built five of these over the years.  What every farmer's barn needs."

Why are you a Farm Bureau member? Well, it’s a great group, and if you really have problems the association is good about helping you out, especially if you’re an active member. The Farm Bureau helps young students see a future path to agriculture. People must eat to survive, so we’ll always have farming. The more the population grows the more food that is going to be needed and supplied to people in the world; Simple as that.  Except in Maricopa County, home building pays more in taxes, so we, as farmers, are slowly getting squeezed out of the community.

How will the next generation of agriculturalists have to operate?

It will be difficult, no doubt about it.  The best farm ground around here slowly seems to be overtaken by construction sites.  Inevitably, growing houses these days seems to be favored by City Managers. Homes generate more taxes, and you just can’t farm the mountainsides. Unless some farming areas are preserved soon, I really don’t see too much future in Ag in Maricopa County. It should be the opposite. You can’t eat rocks. Most of our available farm ground is slowly being eliminated, turned into quick profit for development and again, generating more in real-estate taxes.  The next generation will have to really come up with ways to grow crops in unconventional places. You hear of vertical farming, rooftop farming, and other unexpected spaces. Young people in urban areas may need to take an entirely different approach in the future.

What is the best business advice that you’ve received and/or have given? The best thing to do would be to find a mentor and have them tutor you to avoid the trial and error method like I’ve done all my life. Hopefully, with the trial and error method, you succeed more than you fail. If you have a mentor and you work for somebody in the business, then you can generally foresee the pitfalls before they end up on your head. Proper Prior Planning before taking any leap forward.  Think.