Most of the U.S. Rented Farmland is Owned by Non-Farmers

MOST OF U.S. RENTED FARMLAND IS OWNED BY NON-FARMERS

Information by USDA, with contributions by Julie Murphree, Arizona Farm Bureau Communication Director: Now, keep in mind we're talking about land for rent. Agricultural producers rented and farmed 353.8 million acres of farmland, according to the results of the 2014 Tenure, Ownership, and Transition of Agricultural Land (TOTAL) survey results released last August by the U.S. Department of Agriculture’s National Agricultural Statistics Service (NASS). Of these acres, 80% are owned by non-farming landlords.

According to the survey results, rented farmland acres, combined with buildings on this land, are valued at more than $1.1 trillion. TOTAL counted approximately 2.1 million landlords with various ownership arrangements. In 2014, all of the landlords combined received $31.2 billion in rental income while incurring $9.2 billion in total expenses.

Here in Arizona, these TOTAL results can highlight the variety of farming settings you can find. A number of our own farmers lease land from the landowner to grow their crops or raise livestock, depending upon what the business venture is. Lease arrangements hold their own unique challenges for farmers and ranchers.

“Farmland has always been a valuable resource, but what we see in the most recent TOTAL results is the emergence of farmland as a future investment,” said Joseph T. Reilly, NASS Administrator. “More families are creating trust ownerships to make sure land remains in their family for farming or as an investment.” 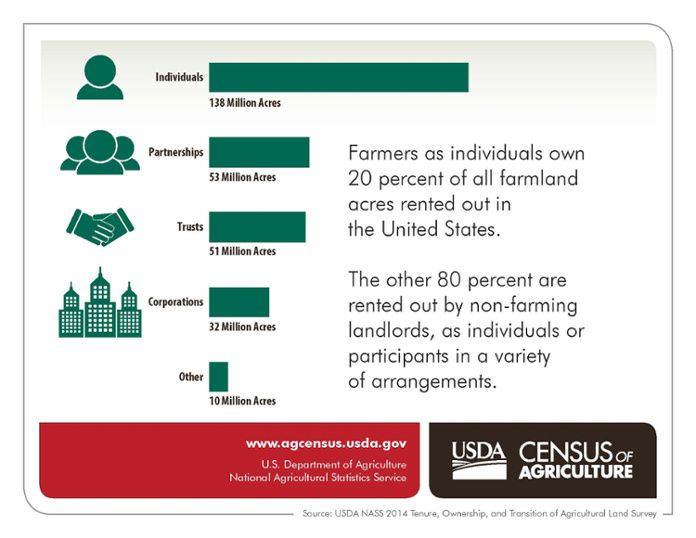 MOST OF U.S. RENTED FARMLAND IS OWNED BY NON-FARMERS

TOTAL, which NASS conducted in cooperation with USDA’s Economic Research Service (ERS), surveyed farmland ownership in 48 contiguous states. It is the only NASS survey that collects agricultural landlord data. The survey is expected to greatly contribute to research and policy analysis. Farmland ownership and decisions stemming from ownership arrangements are key issues for which ERS serves as a primary source of information.

“Access to land is one of the biggest challenges facing agricultural producers, particularly beginning farmers,” said Mary Bohman, ERS Administrator. “TOTAL gives us a chance to demonstrate the extent of the land access issue and provide realistic projections of future land availability for purchase or for rent.”

To access the complete 2014 TOTAL results, in addition to key data highlights, methodology, and Frequently Asked visit http://www.agcensus.usda.gov/Publications/TOTAL/ or the Quick Stats database at http://quickstats.nass.usda.gov.