Organic Retail Farmers Could Prosper with Monsanto in their Backyard

By Julie Murphree, Arizona Farm Bureau Communication and Organization Director: Last Thursday evening (January 12th) Arizona Farm Bureau Field Manager Christy Davis and myself were in Tucson for the fifth and last of Pima County’s Public Information Meetings regarding Monsanto’s Avra Valley Agricultural Facility, where they plan to build a 7-acre greenhouse to grow field corn. This one was held at the Quincie Douglas Center filled to capacity with a crowd as passionate and anti-Monsanto as the previous four. 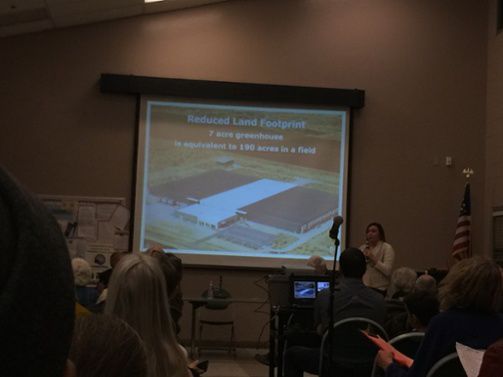 During the last public hearing in Tucson, Monsanto's Dr. Amanda McClerren, product strategy Lead, gave an overview of what they planned to do with the 7-acre greenhouse in Tucson. They've been present at each hearing helping to describe what is planned, in the spirit of full disclosure.

Christy and I attended to help represent our Pima County farmers and ranchers and I thought, if I didn’t chicken out, grab onto that uniquely American tradition of speaking during a public forum. I was nervous that the tomatoes might fly; they didn’t, only a bit of heckling.

When my name was called I had three minutes to tell the Murphree Family’s farm story and explain why I personally believe we should be supportive of biotechnology in agriculture. I almost made it through every point below except the last two sentences of number 5, to me the most important point. My main focus was not to defend Monsanto but to share first-hand how biotechnology on our farm made a big difference.

Only one other person got up and spoke in support of biotechnology. Another farmer who actually farms in the Midwest but resides in Pima County in the winter. He explained the early days of farming when corn seed could only produce about 50 bushels to the acre but in modern times does three and four times as much.

Wading into the throng, I gave our family's farm story. One correction from dad: He's farmed in Maricopa and Pinal County, not in Pima. However, he's worked with fellow farmers throughout the state including Pima County and was farm manager for the U of A's demonstration farm at Maricopa Agriculture Center in Maricopa.

I hold fast to people’s sensibilities that once they understand and farmers and scientists get better at explaining the science that we’ll make gains in support of biotechnology in agriculture. But, we’ve got to share our stories. I did!