Can you recall what you played as a child? And, when you played make-believe, what did you always want to be? For my younger brothers, Patrick and Curt and their friends, it was “Army men.”

On the farm, our playtime could be bigger than life. For one make-believe event, the ingredients included a WWII aircraft AT-6 (a real one), toy machine guns; sacks filled with flour, dug-out foxholes, and wide-open country space. Mixed all together my brother, Curt, and his best friend, Donny England, Jr., had a warm Arizona afternoon in the farming community of Maricopa full of mock bomb runs, rat-tat-tat of toy machine guns, and dusty leaps and rolls with dramatic “low crawls” into their farm-dirt foxholes. The best part of the event was aided by a full-time farmer and part-time pilot named Don England.

Lifelong aggie and Farm Bureau member, Don England ran the Ak-Chin farming operation in Maricopa for more than 20 years and was instrumental in spearheading a congressional project attaining water rights for the tribal lands that endowed their farming enterprise from 2,000 to 16,000 farmable acres; the number they still farm today. Later, he farmed with his son, Don Jr., and more recently two of his grandchildren. A United States Air Force veteran (serving from 1958 to 1962), he maintained his love of aviation after his military service even investing in a vintage WWII trainer plane that became part of little farm boys’ military dreams.

Often, the vastness of your child’s play is relative to the space you must play in, plus your imagination. Maybe that’s why parents want big backyards with lots of grass.

My younger brothers, Curt and Patrick, loved everything military. Curt was serious enough about his endeavor that he and his buddies formed an Army club. The boys would talk mom into making regular runs to the Army surplus store 30 miles away in Mesa, Arizona to meld Air Force, Army and Marine uniforms for their own unique military outfits. The run to the Army surplus store was the highlight of their military adventures as they scoured the bins of military patches trying to decide what rank they were and what insignias to add. They even liked buying the packets of military toilet paper. They wanted to get as close to the real thing as possible. That was close.

Big sisters were good for helping double cinch belts that had extra holes poked into them to fit little waists. 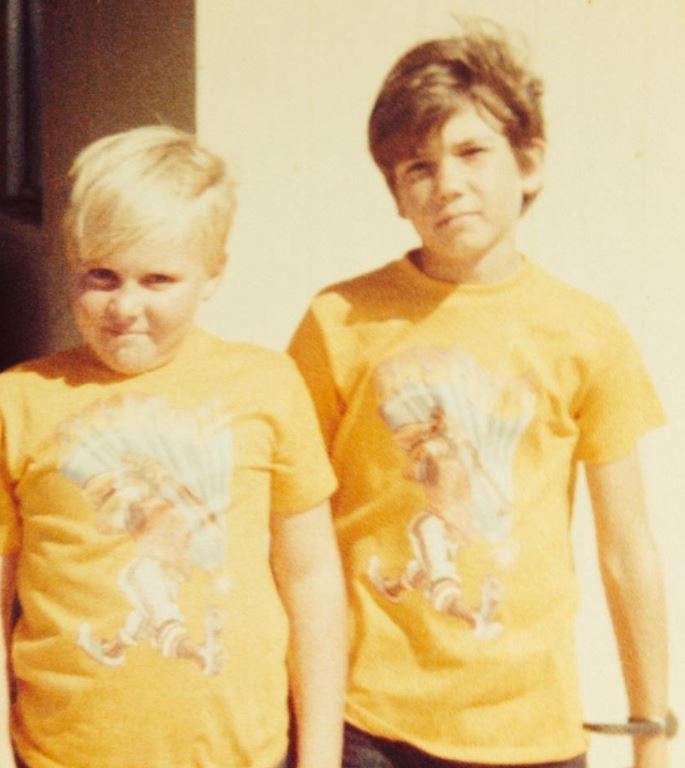 Bomb Run with Sacks of Flour

Mimicking the culminating of major battles of our true military history, the biggest battle day of these little lives happened the day Don England, Sr. fired up his AT-6 trainer aircraft and tossed out flour sacks to create a mock bombing run for his son, Donny England, Jr., and Donny’s buddy, Curt.

Not many make-believe soldiers get to have a real WWII aircraft serve as part of their mock battle. The T-6 originated from the North American NA-16 prototype, the first trainer aircraft built by North American Aviation, Inc. Next came the AT-6A which was based on the NA-77 design and was powered by the Pratt & Whitney R-1340-49s Wasp radial engine. The USAAF received 1,549 and the US Navy 270. The AT-6B was built for gunnery training and could mount a .30 machine gun on the forward fuselage. It utilized the R-1340-AN-1 engine which was to become the standard for the remaining T-6 production. A total of 15,495 T-6s of all variants were built.

During the Korean War and to a lesser extent, the Vietnam War, T-6s were pressed into service as forward air control aircraft. Since the Second World War, the T-6 has been a regular participant at air shows, and was used in many movies, for example, in Tora! Tora! Tora! and The Final Countdown.

With a cruise speed of approximately 145 mph, the T-6’s maximum speed could reach 208 miles per hour at 5,000 feet. And with that military history behind it, Don England, Sr., couldn’t resist having one of his own. And it was perfect for that day’s mock bomb run. How many kids get to simulate a WWII battle with a real WWII aircraft? Plus, without the wide, open space of their Arizona farm setting, it would not have been possible to set up an imaginary battle with a real aircraft.

With cinched-up Army belts around baggy Army pants and loose-fitting helmets, the imagined American forces were being led by Majors England and Murphree.

As they waited in their fox holes out in a plowed field on the farm, they heard the low, distant hum of the enemy aircraft. As it appeared on the horizon, they called out for the troops to be ready. The attack was imminent.

Don Sr., on the first pass, buzzed the boys fast, loud, low, and even to the ground. The boys’ toy machine guns aimed rat-tat-tat at the T-6. Don Sr. banked sharply, turning for another low pass by the boys.

On the farm the England family lived on in the 1970s, they had an airstrip, common among farmers that flew. On the farm we lived on, our Dad, Pat, had put a dirt airstrip in early on so that he’d have a landing strip for his own plane, a green Citabria. 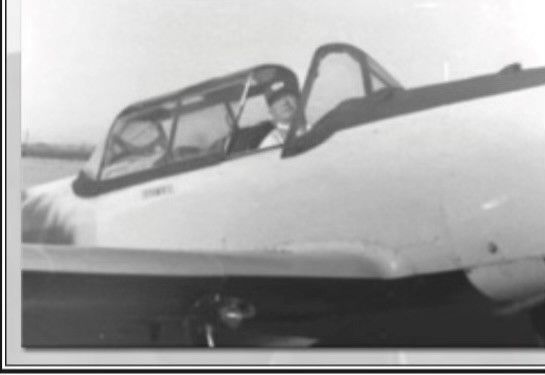 Because there was a runway and plenty of space, Don Sr. had room to make his mock bomb run exciting for the boys but keep their imaginary play safe. As he came around again to buzz them, this time, he began tossing sacks filled with flour out the cockpit of his plane. The flour sacks splatted like white, flat, chalky pancakes with a poof of white powder rising. Several yards away, when they’d hit, the boys ran from fox hole to fox hole, jumping up with their machine guns aimed at the plane, their little bodies spinning, turning and popping down to do low crawls.

When it was all over another imaginary American force had retaken the hill, won the battle and ensured America’s freedom and security for another day. One suspects that Don Sr. had as much fun as the boys.

And around today’s family tables, the England’s and Murphree’s still remember that day’s bomb run with flour sacks out on an Arizona cotton farm. For Curt and Donny Jr., it’s a treasured childhood memory that makes their adulthood more special and hopefully a fun story to share with their own kids. They relive the pure fun of that day and their childhood play.

The wide-open spaces of their play that day are gone, disappearing under rows and rows of same-styled cookie-cutter homes.

But somewhere in those rural communities that still exist with wide-open spaces, is another set of make-believe Army men fighting the imagined enemy of our times. And, we’ll have flying farmers who might just add to their imaginary play with a plane buzzing by low and fast.

Postscript: My brother, Patrick, did grow up to be a Marine, serving four years. Brother, Curt, became a pilot. Don England Sr. recently passed away and we pay tribute to him here, a farmer with a big, adventurous heart.