Sales from Arizona Agriculture Organic Farms up 122%from 2008

By Dave DeWalt, USDA NASS Mountain Region Arizona Field Office State Statistician: During 2014, there were 61 certified and exempt organic farms in Arizona that sold $93.5 million worth of organic products. In comparison, 2008 had 63 of these type farms with $42.1 million in sales. 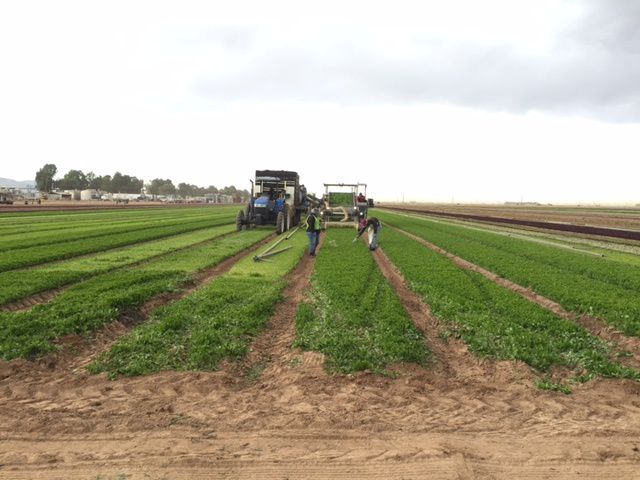 Harvesting spring mix on certified organic Duncan Family Farms, vegetables, potatoes, and melons had almost two-thirds of the total 2014 organic sales at $59.0 million for the organic industry, according to the USDA survey.

At just under $75 million, production field crops, vegetables, potatoes, and melons accounted for 80 percent of total organic sales in 2014. Vegetables, potatoes, and melons had almost two-thirds of the total 2014 sales at $59.0 million. Lettuce sales alone accounted for almost one-third of the total organic sales, at $30.3 million. Other commodities grown and sold by certified and exempt farms in Arizona included dry edible beans ($13.1 million), spinach ($3.94 million), and fresh cut herbs ($2.60 million). Other commodities sold were apples, broccoli, cabbage, carrots, celery, hay, barley, and milk. In 2014, there were 13 certified and exempt organic Arizona farms that were transitioning an additional 5,379 acres into organic production.

Nationally, there were 14,093 certified and exempt organic farms that sold $5.45 billion in organic products in 2014, up 72 percent since 2008. California was the leading state with $2.23 billion in sales. Arizona just missed the top 10 tier, coming in at number 11. Milk and eggs were the top two commodities nationally with $1.08 billion and $420 million in sales, respectively. The remaining top five commodities sold were broiler chickens, lettuce, and apples. There were 1,365 certified and exempt organic farms in that were transitioning an additional 122,175 acres into organic production.

Details about the 2014 Organic Survey

The 2014 Organic Survey was conducted by the U.S. Department of Agriculture’s (USDA) National Agricultural Statistics Service (NASS) in conjunction with USDA’s Risk Management Agency (RMA). This is the third organic production and practices survey NASS has conducted on the national level; the previous data collection efforts were the 2011 Certified Organic Production Survey and the 2008 Organic Production Survey.

The 2014 Organic Survey is a census of all known organic producers in the United States that are certified, exempt from certification (those grossing less than $5,000 annually from organic sales), and those producers transitioning to organic production, as directed the 2014 Farm Bill. The survey population included records that reported Organics on the 2012 Census of Agriculture, 2013 National Organic Program list, 2011 Organic Production survey, and other list sources.